I gave you your episode-by-episode spoilers up to the final four last Thursday, and the remaining portion of this column will be added on to that. Here is the remainder of how the season played out after Hometown Dates.

I posted the final four before they started filming them, and had exclusive pictures from 3 of the 4 hometowns. I’ll use these pics for each of them now. Once the ABC bios & headshots are posted (if they aren’t posted today, then it’s not coming til next week), I’ll use those instead since they are the most recent pictures of each guy. 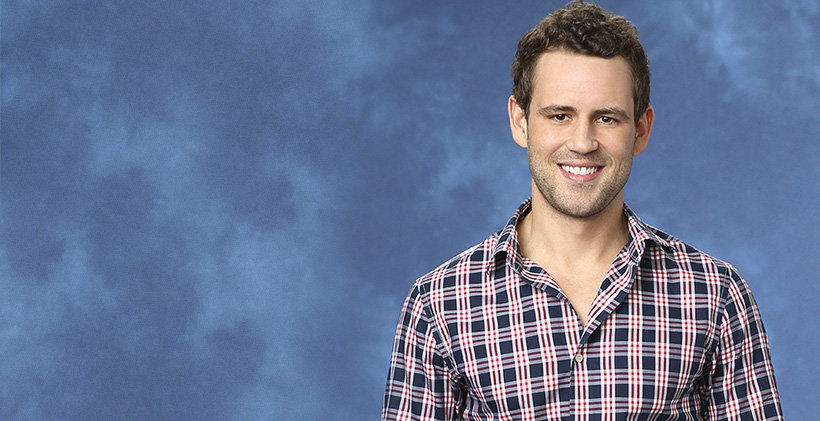 Andi & Nick had drinks at the Lakefront Brewery in Milwaukee before going to his parents house in Waukesha. I posted exclusive pictures from the parents house the day after the date happened. 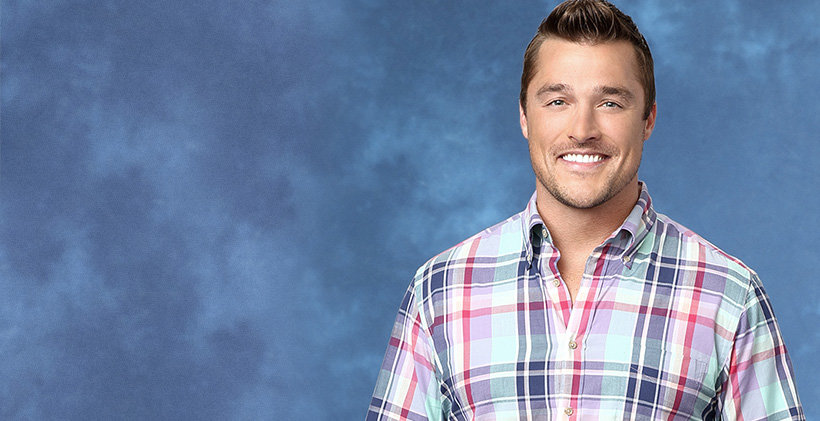 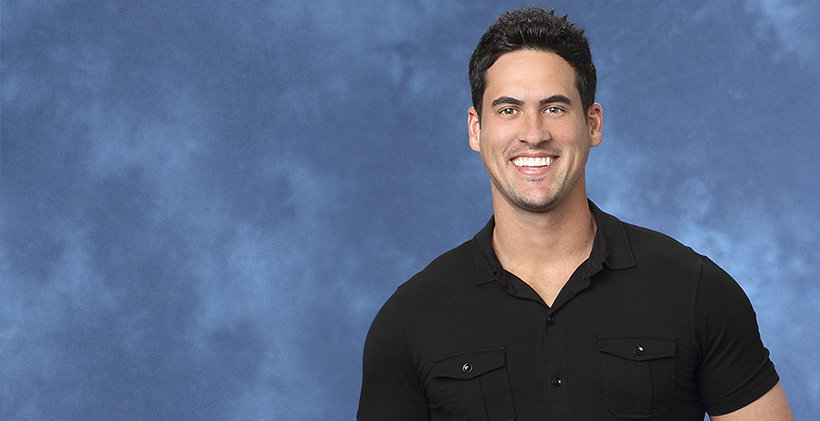 Marcus Grodd (Dallas, TX) (Filmed Tues., April 22nd) I was told filming of Marcus’ hometown would be at the Highland Park Village (only about 20 minutes from me), so I drove down there and watched what I could. I documented it all on Twitter and then posted the next day what went down. 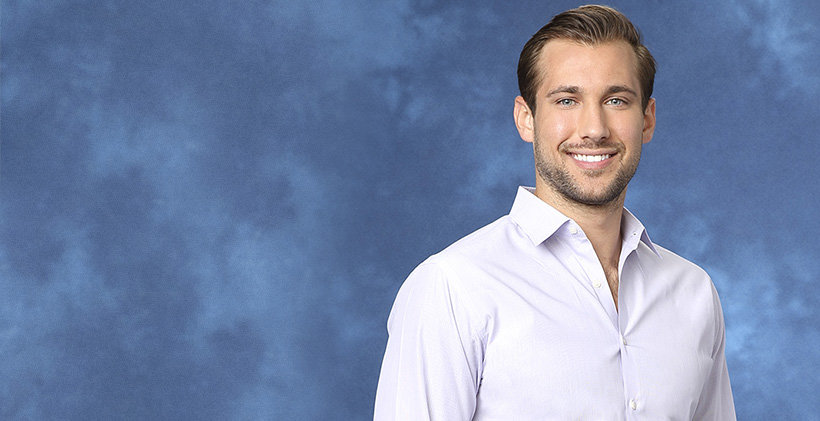 Lets get it out of the way now so you all won’t be asking on July 14th. No, I don’t know how many of the guys Andi slept with on the overnights. In the past, some have slept with all three. Some have slept with two. And some have only slept with only their final guy. It differs every season. I’m sorry I’m not able to report to you how many of the guys Andi gave it up to. But I’m sure it was wonderful. Go hit them up on social media. Maybe they’ll tell you. If I ever find out stuff like this, it’s usually not until the season is long over and no one cares anymore. And yes, Courtney does talk about her fantasy suite time with Ben in her book and doesn’t hold back. Hey, if you like gossip, and you like reading trashy tabloid magazines, and you especially like reading trashy tabloid magazines that cover this show, I don’t know why you wouldn’t want to read Courtney’s book. It’s right up your alley. I get nothing out of promoting her book, but I’m telling you, it’s better than you probably think it is.

So will the curse be broken? Only one time in the recent history of this show has the person who received the first impression rose ended up being the final one in the end, and that was Roberto on Ali’s season. As we know, Nick got the first impression rose this season. Or did she go with Josh, the guy who when I confirmed his as a contestant the day after Juan Pablo’s season ended on March 11th said she’d either pick him or he has next “Bachelor” written all over him? Well, for all things Travis Stork & Sarah Stone, it’s now official…

Andi is engaged to Josh Murray.

Why did I mention Travis & Sarah? Because that was the last season where the lead chose someone who lived in the same location as them – and those two were broken up before their finale even aired. But rest assured, especially after reading Chris Harrison’s summary of the season yesterday, we already know that the Josh/Andi storyline will be they traveled all over the world to fall in love with each other when they were right in each other’s backyard and didn’t even know it.

I’m sure already some of you conspiracy theorists will assume Josh and Andi already knew each other before the show, that this was some sort of set-up blah blah blah. Trust me, I love a good conspiracy theory more than anyone, but sorry to burst your bubble. It’s not the case. Andi and Josh did not know each other before this season started. Is Andi’s dad a huge UGA fan? Yes. Had Andi heard of Josh’s brother before the show? Yes. Did she send this tweet out back in January once Juan Pablo’s season started airing? Yes. 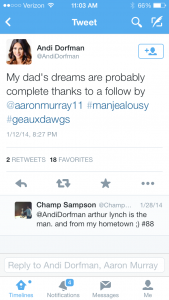 But that’s the extent of it. She didn’t know him before the show, they hadn’t had any contact before the show, and this wasn’t pre-arranged. Obviously Josh living in the same location as Andi probably played a role in him getting cast, but hell, they cast a few girls from Juan Pablo’s region (Spanish speaking ones as well) and he got rid of them immediately. You like who you like, and Andi liked Josh Murray enough to get engaged to him. Reading into it any further is an effort in futility. Even though Travis & Sarah failed miserably, I will say for the first time in a while, I’d actually give this couple a chance. You know me, one of my biggest things with this show is throwing strangers into this setting, having them barely get to know one another over a span of 7 weeks, essentially make them get engaged, then throw them back into the real world again and start their life in a long distance relationship as an engaged couple. It’s just not realistic. So I think the proximity of Andi & Josh’s current places of residence will definitely be a lot easier on them than past couples that’s for sure. How can it not be? These two just look like two people who’d be dating. To take it one step further, hell, they look like they could be brother & sister. Although Andi went to LSU & Josh is a UGA grad. This could get ugly during college football season.

Probably won’t ever get an answer to this, but definitely interesting to see how this season handles the final couples’ safe house visits. They live close to each other. Will they really need to fly them to LA and put them up in safe houses in Malibu, Palm Springs, and Hollywood Hills every other weekend? Will all the safe house visits just take place somewhere in Georgia? Do they mix and match? Obviously Andi & Josh aren’t stupid enough to be caught seen in public in Georgia, but how do these two NOT discreetly meet up with each other in “non-approved” ABC visits? I certainly would if I were them. Or maybe the show knows they’re gonna do it, and just tells them to be careful and not to make it obvious like, oh I don’t know, her car parked out in front of his place. Just something to think about.

Now the next question from people will be, “Who will be the next Bachelor?” All you pretty much need to do is read Chris Harrison’s “5 Guys to Watch” and know he’s already pumping up America for good ol’ country boy millionaire, Chris Soules. Not too hard to figure it out. Just like I said with Andi before Juan Pablo’s season started, I’ll say the same thing with Chris: this is his gig if he wants it. Sure the show will do their song and dance and ask their audience who they’d like, who are their favorites, and they’ll talk about what a tough decision they have. It’ll all be just to drum up interest in the franchise. It’s Chris’ gig to lose. So any ladies thinking of applying next for next season, or have already made it through any rounds of casting, pay attention to him during Andi’s season because that’s most likely gonna be your guy.

Of course with every season ending spoiler, I have to say what I always say: believe what you want. I’m never truly vindicated until the final episode airs but I’m not worried. Of course people will doubt the spoiler. Happens every season and, every season (sans a couple), the spoiler turns out to be right. Everything I’ve given you in the episode-by-episode spoilers, every rose, date, elimination you will see happen. If you want to knock yourself out over the next two months trying to come up with theories about why it’s wrong, and so-and-so said this, and I saw so-and-so doing this, and yada yada yada – knock yourself out. It’s a waste of time. The spoilers are right. Again. You’ll realize that all season long as each episode passes. Was I wrong on Des’ season? Absolutely. Then I came back last season and nailed every single detail of Juan Pablo’s season 6 weeks before the first episode aired. This show has a much quicker turnaround time since it’s less than 2 weeks from the time filming ended until the first episode airs – and you still got every spoiler for you laid out on a silver platter. Glad I could be of service. And with the “Bachelor” franchise getting renewed for a 19th season just recently, well, you’re stuck with me for another year. Yippee!!!!

As for my tweet on Sunday night where I mentioned that I got information this year that I’ve never had before, yes, that is the case. And I will share it with you. Next week. Trust me, you’re gonna like this one. Until then, enjoy the spoilers, congrats to Andi & Josh and as always the offer still stands that if the final couple ends up getting married, I will buy them a wedding gift.