Some notes to get to before a loooooooong “Reader Emails” section, including the return of “Dr. Reality Steve,” which will be on the last page. Great to have him back. He’s a real genius that guy. Send all your love/sex/relationship/marriage queries in. He’s the best advice giver in the world and doesn’t even charge you.

A thing I got a lot of tweets and emails about yesterday was obviously every single tabloid and entertainment outlet running their, “Emily Maynard to be the next Bachelorette” headlines, with none of them even mentioning that a week ago I said the same thing. Well, except for AccessHollywood.com. They were the only ones who acknowledged it, so thank you. Isn’t it funny how all the stories also threw in, “Our sources are telling us that filming is being moved to Charlotte.” Really? Wow! What a coincidence! I told everybody that last Wednesday. Look, I get how it is. These sites and magazines are not going to ever credit me for stuff I have on my site way before them. It’s how it goes. I’m fine with it. Sure, I love pointing it out because it shows what little credibility they have. Hey, if you want to get your “Bachelor/ette” info from People, and US Weekly, OK Magazine, and E! Online, by all means, you do that. Just know that you’ll be weeks behind people that get it from my site. I’m sure plenty of people who read those sites don’t read mine, and I’m sure plenty of my readers don’t read those sites. Works both ways. I’ve been spoiling and giving you inside information about the show for three years now. I think it’s obvious where to go to get your “Bachelor/ette” news from, and it’s not those sites. They will rarely tell you anything you haven’t already read on my site weeks earlier.

“People” even ran in their story yesterday that their “sources” are telling them that Bentley is interested in being on the show. Look, this show is 2 months away from filming. Final casting hasn’t even happened yet. That’s nothing but speculation at this point. Remember, this show has never re-casted someone from the beginning of the season to compete that was previously on another season. So IF Bentley even comes on Emily’s season, I’m guessing it would be in the same way Shawntel came on. I have no idea if that’s going to happen. We’re too far away. Not on my radar yet. Could I see ABC approaching him and asking if he wants to? Of course they will. Will he do it? I have no idea. Remember, that guy hasn’t given one public comment in six months since the beating he took for his showing during Ashley’s season. Although, he is finally on Twitter now as he just joined within the last week I believe. So maybe he’ll make some comments there, but I doubt it. Whatever the case, I’m guaranteeing you that if Bentley does end up appearing on Emily’s season, guess where you’ll here about it first? Here’s a hint: It rhymes with “Beallitycreevelockbomb.”

So today Shawntel and Brittney will be the two girls on the conference call with the media. Frankly, outside of “What’d granny think of you bolting the house?”, I don’t care much for what Brittney has to say. On the other hand, I’m very curious to know how Shawntel handles this. Of course, the stuff that I want to ask her is never going to get asked, but hey, if any of you reporters want to actually earn your money, get on the conference call today and ask any or all of these three questions:

1. Did going on this show have anything to do whatsoever with you being able to now talk to the media and promote your book coming out called “The Final Rose?” Seems awfully convenient considering the timing of everything.

2. How much did you get paid to come on the show? And don’t say nothing, because that’s a lie.

3. In Chris Harrison’s blog this week, he says you approached the show about coming on to see Ben. You say the show called you about the idea. Why can’t either of you get your stories straight since it basically is ruining the whole credibility behind your appearance?

Those will never get asked, but, at least they out there in case anyone wants to take a stab at it. You don’t even have to credit me. You’re welcome.

Did you read Ben’s quote to TV Guide this week? Very interesting. First time I’ve ever heard the lead of this show basically acknowledge that the proposal at the end is bogus. TV Guide asked him, “So Bachelor time is kinda like dog years?” And his answer:

Ben: “I realize that an engagement here is very different than a marriage. It’s a commitment, and that’s what it will remain until the next step. It’s a leap of faith that we have to take – bigger than people take in the real world.”

Nothing that none of us already didn’t know, but no lead has actually ever come out and basically admitted, “Yeah, the engagement at the end means nothing. It’s what happens afterwards that matters.” Like I’ve said, I’ll believe the ending of this show when the final couple actually walks down the aisle.

As we saw a couple weeks ago, I posted the pictures of Ben being silly at his high school reunion. Well, Ben was at it again last week as he took pictures with his boys at the company he worked at before moving back to San Francisco, “Let it Ride Design” in San Diego. This is where the Storm Horse came to life. He’s still in the video on their homepage. After viewing these pictures, I think it’s pretty safe to say that Ben is just a big giant goof. And likes hanging out with shirtless dudes in their underwear. 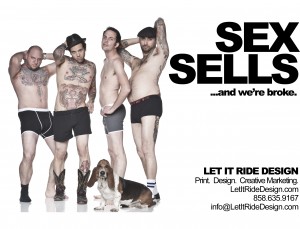 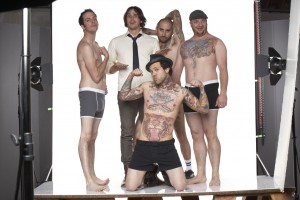 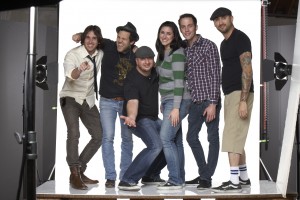 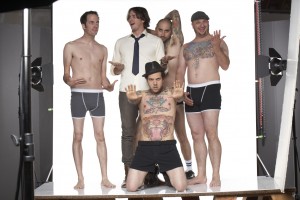