Thanks to everyone who participated in the live video blog on Thursday. It was a lot of fun. Will be some changes to this week’s show. Same time (9PM EST/6PM PST) right here back on the site, but I’m going to keep it to 45 min. An hour and a half was way too long. However, the webcast does have a feature that allows me to bring up your text question onto the screen instead of reading it from the cue like I was last like. And furthermore, once the show is over, each question that is answered is “bookmarked” in the timeline in the show, so instead of going back to watch the whole thing to find out what was talked about, you can just scroll your mouse over all the “bookmarks,” see what questions were asked, and start the video at that exact point. Really cool feature that you all will like. So join me this Thursday, sign up, and get your questions in. I will answer as many as I can.

This past Friday I tweeted, “Well lookie what we have here” and said I’d received some information, video, and pictures that I would share on Monday. First the video and pictures. Ben tweeted on Friday that he was at San Francisco airport, but didn’t say where he was going. Well, a couple hours after he landed, I had someone who was on his flight tell me he was on Southwest flight 2686 from San Francisco to LAX. She was able to get these pictures of him: 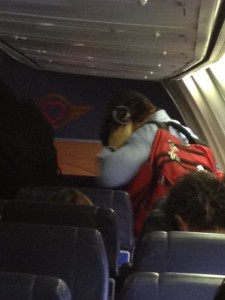 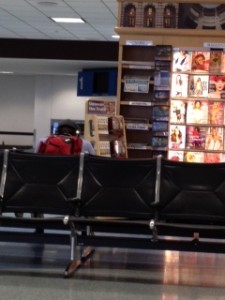 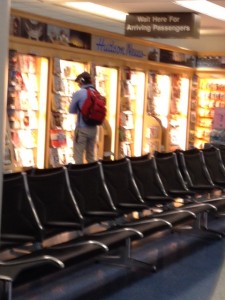 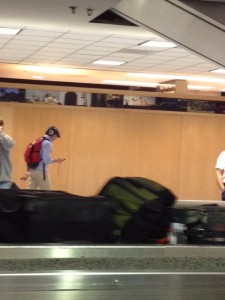 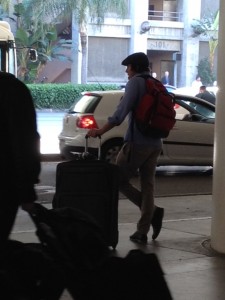 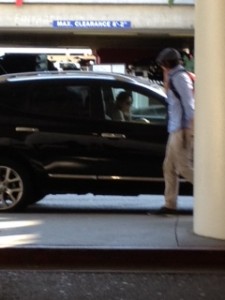 Here’s even a :40 clip of him getting picked up at the curb by what looks like Cassie Lambert, his producer:

At the time on Friday I figured this was significant because he never tweeted where he was headed, and now we knew he was in LA being picked up by production. So I was gonna wait to see exactly what he tweeted this weekend, and it could’ve been proof that he was with his final girl (regardless of who you think it may be), and having one of his safehouse visits this weekend. He very well might’ve anyway, but the next morning at 8am, Ben tweeted he was on a flight back to SF, which he was. And then Sunday he went to New York. So, we know he was in LA for less than 24 hours for whatever reason, but, the pictures and videos I thought became less important once he left the next day. Who knows? Maybe he did see his girl for one night? Usually the safehouse meetings are much longer than that, but, maybe they had to squeeze this in. Not sure. But at the time I tweeted Friday, I thought the pics and video could’ve been important, depending on what he tweeted the rest of the weekend. Alas, it doesn’t really prove much, other than he was there for a night.

As for the other information I received, I actually was told back in November that someone returns to the show, but didn’t have any details surrounding it. I heard again on Friday that someone does come back, and the previews last night clearly show it’s Kacie who returns in Switzerland (after getting dumped at the hometowns), to warn Ben about Courtney. Nothing more, nothing less. She doesn’t come back to try and win him over or ask back on the show, but she shows up in Switzerland to let Ben know Courtney is an evil witch that needs to drink a bottle of poison.

Also, the previews for next week also clearly lay out who’s on what date. Man, they don’t even try to hide stuff anymore, do they? It’s not even a big deal at this point when they are just giving things away in their promos. They gave the skinny dipping away back in December, Shawntels return in San Francisco, Kacie confronting him in Switzerland, and now next weeks dates. Kacie has a 1-on-1 which we knew, the group date has 6 girls on the boat – Lindzi and Jamie are sitting closest to Ben, Emily and Nicki in the middle, and Courtney and Casey at the front. Which means Rachel and Blakeley are on the 2-on-1 date, and Blakeley gets sent home.

The previews also show Chris pulling Casey S aside to tell her something. Well, that has to do with the boyfriend back home. The previews make it seem like somebody died and she has to immediately rush home or something, but that’s not the case. Look at what Chris Harrison says in his blog today about it:

“What I’ll tell you is this has something to do with her personal life back home and it concerned me enough to step in and talk to her about it. In next week’s blog I’ll explain exactly why I did what I did and how some of it was related to my regret of how I handled the Bentley situation with Ashley.”

Uhhhh, yeah. If he’s comparing it to the Bentley situation, this has nothing to do with any family emergency or anything like that. This has to do with what I mentioned back months ago, was that I was told Casey was dating a guy named Michael Patak before she left for filming. Don’t know how it’s presented or what the exact storyline is, but rest assured, her exit has to do with having a boyfriend back home. Even The Bachelor Fan Page on Facebook posted this status last Wednesday:

” Secret of the Week: Soon it will be revealed that one bachelorette still has a boyfriend… Who do you think it is?”

Look at what next weeks press release for the show even says:

“On rose ceremony day, Chris pays a surprise visit to the women, pulling Casey S. from the group. In another of ‘The Bachelor’s’ most dramatic moments, he confronts her about a situation she has kept secret from everyone. A shocked Casey S. then must admit the truth to Ben. How will he take the news?”

Yeah, this show is very well aware how long spoilers have been out and basically has accepted the fact that they might as well start using social media to their advantage to promote the show. And if that means giving away stuff early, then so be it.

One last thing before we get started that I hope you find amusing. One question I’ve gotten all season has been, “What’s the deal with Courtney’s mouth?” Yes, I agree, it does have some weird contortions to it. However, in case you weren’t paying attention to the cocktail party in last week’s episode, you might’ve missed our rapping Epidemiologist giving her a run for her money by moving her mouth side-to-side 1,000 times. So thanks to Nick Adams for spending the time to put this video together for me, I now present to you the Courtney vs. Emily “Face Off” from Episode 4 (You Tube is saying some parts of the country may not be able to view it. If you can’t, I’m sorry). Keep in mind, all these facial reactions were from one 15 minute segment during the cocktail party when these two went at it. Amazing.