Posting a little earlier today since I have an 11:30 flight out of here to see family for the weekend. Got a 5 year old’s birthday party on Sunday at one of those bounce houses. Those are always fun. Think any sugar will be given out at that thing? Of course tonight, I’m sure he’ll tell you how old he’s gonna be when we do the live video blog (9PM EST/6PM PST). I think my niece will be more into it than my nephew will. Especially since she likes to read. I’ll have her read some of the questions. Hell, you can even send in some questions that you want her to answer. Just don’t make it “Bachelor/ette” related. She doesn’t care. However, if you ask about “Big Time Rush” or “Shake it Up,” I’m sure she’ll answer whatever you’d like.

In case you didn’t see the tweet on Tuesday, there was an article in the Canada Globe and Mail posted which talked about my legal battle. Definitely another interesting take on things which seem to back up a lot of the sentiments that Matthew Chan has been sharing on his website. To read the article, you can click this link:

“Is the Bachelorette Harmed By a Spoiler Site?”

Also, feel free to sign the Reality Steve Online Petition that was also started by Mr. Chan. We’re over 1,600 signatures now and looking to get as many as we can. Once again, this legal fight has nothing to do with whether you like me or my site, but everything to do with my right as a journalist to report information to everyone without being bullied by a big corporation who has a lot more money than I do. Any donations you’d like to make to my legal defense fund, click the “Donate” button at the top of the page and read through how this all started. I appreciate all that’s been donated so far and any future donations. It’s an uphill battle, but any donation is welcome. Making a little dent into my legal fees is better than making no dent at all.

As I mentioned Tuesday, I will be attending the Chris4Life Dream Date Benefit at the SLS Hotel in Beverly Hills this Saturday night. If you are still interested in attending, you can still purchase tickets for only $60 by clicking here. You can win a date with some of your favorite “Bachelor” or “Bachelorette” contestants as they will be auctioning off Jillian Harris, Dave Good, Erica Rose, Natalie Getz, Roberto Martinez, Michelle Money, and just added Kacie Boguskie from Ben’s season. Kacie just recently did an interview with WetPaint regarding her time on the show and what she’s been up to since that you can read right here. Looking forward to the event Saturday night.

As for Emily’s filming currently in Bermuda, if you saw Mike Fleiss’ tweet yesterday, you’ll know that he announced it was a 2-on-1 date. What I can tell you is that the date took place aboard a yacht named the “Venetian” and it ended up docking at the Fairmont Hamilton Princess Resort. Don’t know which two guys were on the date or what the result was, but I’m guessing I will find out soon enough. We’re only two weeks into filming and basically every date they’ve been on so far, with the exception of a couple, has been accounted for. Not to mention I’ve basically the seen the faces of every guy left thanks to the picture in the Charlotte airport from Sunday before they left for Bermuda, but I still don’t know who exactly is who yet. We’ve got a long haired guy that plays the guitar, a tatted up meathead, a suave good looking dude who is bugging the sh** out of me because I can’t find info on him even though I know his name, a shaggy haired looking guy, and another relatively good looking guy with a little gray hair showing, to name a few. It’s ok. There’s still plenty of time to find all this out. Not worried.

Here are pictures from the mansion of four guys jogging taken last Tuesday, the 20th, which was the day of Chris Bukowski’s 1-on-1 date. I know who two of these guys are. Not sure who the other two are and doubt they are still even on the show: 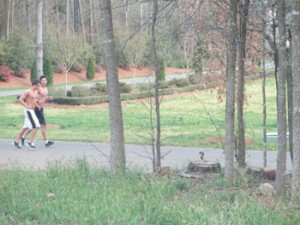 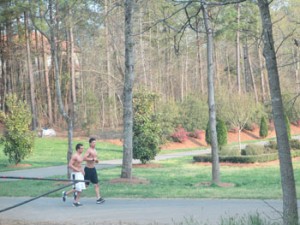 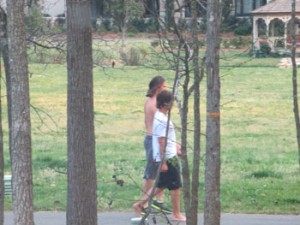