-Emily is in London and you’ll never guess who she brought with her! Little Ricki. I’m sure they’ll just say this was part of her schooling and she’s learning about different cultures by traveling the world at six years old, but ummmmmm, I’m guessing Ricki doesn’t have a clue where she is or what the hell is going on. But hey, missing school for a month is OK kids! As long as ABC provides a nanny and a tutor, it’s all good. Next up, the 10 remaining guys arrive at Trafalgar Square in London. Or is it nine? You be the judge: 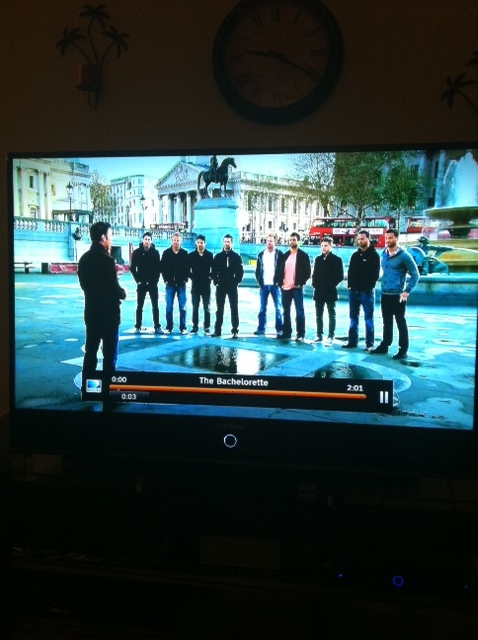 The very next shot is a wide shot of Chris talking to the guys (of course Chris is in a completely different colored jacket now), and there’s 10 of them there, including some guy wearing a white top, which clearly wasn’t in the shot we just saw of them standing in front of Chris. 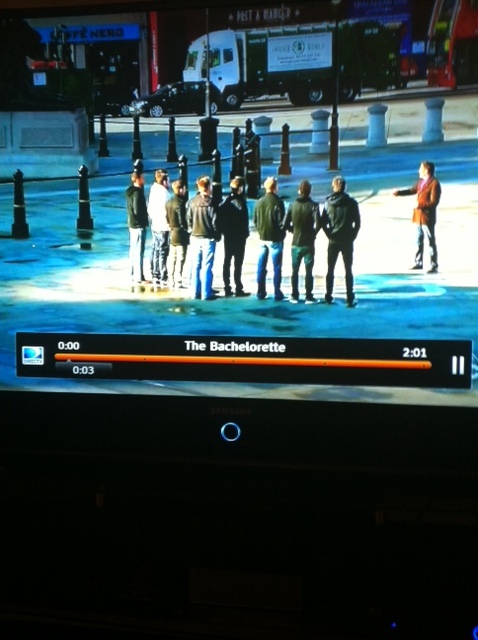 Not to mention Chris Bukowski has a completely different top on in the second picture, the order they’re standing next to each is completely different in both pictures, and Chris Harrison is in the shade in the first picture, and in the sun in the second picture. But other than that, it’s totally legit. Let me let you in on a little secret how this all works. A lot of the time when the group is arriving at a city or a hotel, we see them getting out of the cars etc making us think we’re watching exactly when they arrived, when in reality, usually their arrivals into cities and hotels are done in the late hours of the night or early morning, so they have to recreate it the next day to make you think that’s their real arrival. Ask any former contestant this, they’ll tell you about how they had to re-shoot shots the next day pretending that’s when they were really arriving. Which really isn’t that big of deal, just know that it’s done. So my guess is, the second picture above was shot the day when Chris described to everyone about the dates. For whatever reason, the shot had to be re-done (could be any number of reasons – sound, lighting, wind, etc), but was after Kalon was already gone, which is why he isn’t in the first picture. So there’s your little editing lesson for the day. Someone screwed up and mixed up the two scenes that they shot. No worries. Isn’t the first editing error this show has made and certainly won’t be the last.

-The date card arrives and it says, “Sean, Love takes no prisoners. Emily.” This has Alejandro and Kalon upset because both of them wanted 1-on-1 dates. Apparently no one’s made Alejandro aware of the fact that you’re not allowed to receive a 1-on-1 date on this show if you have more bling in your ears than the lead does. As for Kalon, it’s safe to say he didn’t get a 1-on-1 because Emily fears for Ricki’s life. Even though Kalon hasn’t dropped his “baggage” line at this point, I’m pretty sure Emily has a good idea what kind of a creeper Kalon is with his loafers, sweaters, and ridiculously glossed lips. Whatever the case, Sean is happy he finally got his 1-on-1 and drops a litany of generic lines about how excited he is. By the way, did Barbie and Ken ever break up or are they still a couple? Because I think if those two ever decide to end things and not stick their plastic parts into each others orifices anymore, the new name for a couple like that should be “Emily and Sean.” I can’t wait til Toys R’ Us starts selling Emily and Sean dolls. All the kiddos will love them.

-Emily and Sean take a tour of London on a double decker bus. Sean is giddy over this. “London’s calling and I’m gonna answer.” Oh Sean, that was truly terrible. How about, “Ring! Ring! Hello? Is this London calling? Yes, this is Sean! I can’t wait to see you!” That HAD to be a line a producer fed to him. HAD to be. It was too cheesy not to be. And did I hear him correctly? Were they riding by Big Ben and Sean didn’t know what it was? Hell, I’ve never even been out of the country and even I know what that big clock is in London. Didn’t he ever see “European Vacation?” “Hey look kids!” “We know Dad….Big Ben.” “Parliament.” This has not gotten off to a great start for good ol’ Seanie. He’s dropping terrible one-liners about London and he doesn’t know what Big Ben is. Maybe Sean fell asleep in middle school when learning about England. Maybe Sean has never seen “European Vacation.” Or maybe Sean is like me and doesn’t give a sh*t about England and anything it has to offer.

-Next up on the tour stop is Emily pointing out St. Paul’s Cathedral where Princess Diana and Prince Charles got married. Let me tell you something honey. If this guy doesn’t give a rat’s ass about a big clock, he certainly doesn’t care about British weddings and where they took place. Or maybe I’m just speaking for myself. No, I’m speaking for both of us. This guy played linebacker at Kansas St. You think he’s up-to-date on where the nuptials from people 31 years ago in England took place? (I googled it). Didn’t think so. Prince William and Kate Middleton also had some famous kiss at the Buckingham Palace, and since “When in London…” must apply here, Barbie and Ken decide to take pictures here as well re-creating the scene. Even though they aren’t on the balcony. Nor are they royalty. And Sean probably couldn’t tell you Kate Middleton from Kate Upton. I’ll help you out here Sean. Kate Middleton is the uppity brunette who had the wedding where everyone wore stupid hats. Kate Upton is the 19 year old hottie with the giant cans who loves bouncing around in her bikini:

-During their talk, she asks Sean when his last date was and he says four or five months ago. And it was only one date. Said she didn’t have the qualifications he was looking for. She must’ve grilled him about his European history. Or been a Rock Chalk Jayhawk fan. I’m guessing those are two dealbreakers right off the bat for him. So these two head on over to Speakers Corner where, ummmmm, people get up and speak in front of a crowd about whatever they want. Sean gets up and tells all of London surrounding him about what he thinks love is. I mean, I guess he really had no choice here, right? What’s he gonna get up and talk about, college football? The BCS? Good dental hygiene? These people would be clueless. So Sean is very brave to stand up and do what he did and it seemed to please Emily. I wonder if these Londoners even had a clue what was happening. Do you think years from now, the people of London will be telling their grandkids about how one April day, the blonde hunky dude with the Southern accent came and told them stories about what love truly is? I think they should erect a statue in Sean’s name since he laid down the law and told everyone overseas wassup when it comes to love. Take that bitches. S-Lowe. Peace out.

-On their dinner date, Emily is in full blown sick mode at this point. She sounds like Lindzi Cox after a pack of Marlboro Reds and a bottle of Jack. Can someone float this woman a Sucrets or some Halls or something? This sounds awful. Their dinner is held in some old time prison cell which of course led to the inevitable, “Sean is totally my prisoner of love tonight.” As attractive as Emily is, and as great as she looks on that date, ain’t no lovey dovey happening when she sounds like that. Prisoner of love is gonna have to wait til mama is a little better. She also tells him that King Henry VIII took his wives there and beheaded two of them, which I believe was supposed to scare Sean into thinking that if things went south, she cut his nuts off. Whatever the case, Sean tells her their date earlier in the day was the best date he’s ever had in his life. Even though he didn’t have a clue where they were, what any historical landmarks meant, and that he had to speak about love to a bunch of strangers. So yeah, best date ever. Do you know how many times, “This is the best date I’ve ever had” line has been uttered on this show? I think every episode ever.

-Sean asks Emily what’s the biggest surprise she’s seen in him? She says, “You have everything that could make you perfect. But you’re humbled.” Uh oh. There’s that word again – perfect. Every time she throws that word around, like she did with Doug, there always seems to be a “Brad Womack” to follow it. And we all know what happened with Brad, don’t we? And in case anyone didn’t know this since they’ve kept it kind of a secret this season, Emily has a child. So she wants to tell Sean about her. You know, in case he doesn’t know. “As you know, I have a 6 year old daughter. I want kids. Like yesterday. How many kids do you want?” Sean said two because he liked how him and his sister came out. Emily wanted none of that. Sounded like she wanted him to say, “Sure, two sounds good. Times three.” Which is when Sean quickly changed his answer from two to “I’m open minded about it.” Good answer Sean. You’re still in the game. Emily has made it known pretty much every episode that she wants to be pregnant, like, last Wednesday. Maybe on the “After the Final Rose” this year, not only will we get to see who she chose, but they’ll do one of those ridiculous gender identity parties. Ummmm, please tell me when did this fad start and when is it ending? Ladies, we’ve given you your baby showers. Take them. Have the whole day to yourself with your girlfriends and gossip and tell baby stories til you’re blue in the face. But enough with the gender identity parties. It’s over-the-top and unnecessary. Whatever guy tells you he’s in favor of those is a liar.

“Reader Emails,” “Dr. Reality Steve,” Is Roberto the Next Bachelor, & US Weekly Is At It Again
Your “Bachelor Pad” Cast Announced, Pictures of the “Newbies,” & “Reader Emails”
To Top