For the longest time, the rumor that was going around which I’d first heard about back in December of 2011, was that the reason Emily had agreed to become the “Bachelorette” after months of saying she wanted no part of it, was that because she was promised a spot on a future season of “Dancing with the Stars.” Well, it looks like she has some competition now. According to a report in “US Weekly” that hit stands today, “a deal hasn’t been finalized, but it’s likely” that Sean will be announced as an official cast member on February 26th, when “Good Morning America” makes the announcement. Well, they certainly aren’t casting both of them, and Sean is the “hotter” name right now because his season ends a week before the DWTS premiere, so I definitely think there’s validity to this story. Hell, they cast Jake Pavelka on this show, and we know Sean is about 100 times more likeable than that guy, so it’s not far fetched at all that they’d be after Sean. I know Sean may have said in a recent interview, “I’m not sure if any TV is in my future. I’m not seeking fame or anything like that,” but he also ended that sentence with, “but if the opportunity is too good to pass up, I would take a look at it.” Money talks people, and when you get a six figure deal just by signing your name on the dotted line for DWTS, THAT’S an opportunity you don’t pass up. I haven’t been told for sure he’s on it, but with this report coming 2 weeks before the official cast announcement is made, someone knows something, so, I absolutely can see why DWTS executives would want him, and I would not be the least bit surprised to see Sean on the show.

Yesterday afternoon, HollywoodReporter.com summed up our motion filings yesterday in this article. Maybe it sheds a little light on the subject for those that were interested, and gives you a little more detail to what my Agreement that I signed was about. It’s pretty cut and dry if you ask me. If they believe a breach happened, they are to notify me in writing (which they did before on the Erica Rose incident), and I have 10 days to respond to them before they can file any injunction. They never notified me of anything this time around, they just went and filed a lawsuit that has ZERO specifics in it. Which is why I’ve said from the very beginning, I’m confused as to what they’re basing this lawsuit on. They have nothing. They filed on Dec. 21st, and here we are almost two months later, and they still have yet to show us or the court any shred of documented evidence that I breached our Agreement, which is what the Agreement specifically states. Yet, on the Erica Rose incident, they followed protocol, notified me by email of what they thought was a potential breach, and rather than fight it, I paid my fine, took down the “Bachelor Pad” spoilers, and proceeded business as usual moving on to spoiling Sean’s season. The whole point of me signing that Agreement was to prevent this very thing from happening. I agreed that if I break the rules, then by all means absolutely they can come after me as long as they show proof that I breached. They couldn’t just assume I breached because my spoilers were so accurate, yet, that’s exactly what they did. Go read the lawsuit. They state zero specifics of how they think I breached, just that they assume I did. This is all very bizarre and corporate bullying at its finest if you ask me.

You know else I find pretty ironic in all this? Look at what Chris Harrison and Executive Producer Robert Mills both tweeted yesterday: 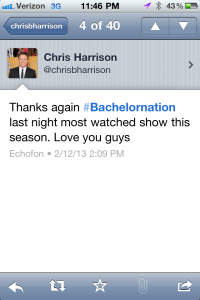 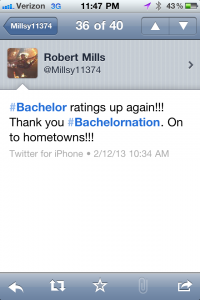 And actually if you go back the last month both of them, and Mike Fleiss, have tweeted every Tuesday afternoon when the overnight ratings came in, how excited they’ve been for the viewership and thanking the viewers. Which is great and all, but on the flip side, they’re suing me essentially saying I’m causing damages to their show. So which is it? Are you thrilled with the ratings that you keep tweeting about, or, am I ruining the show? Can’t have it both ways if you ask me. Either I’m affecting your show like you claim in the lawsuit or I’m not. Look, we all know what I do only brings more attention to their show, and that’s why I find these tweets every Tuesday about the ratings so comical.

Courtesy of DailyMotion.com, the deleted scenes from Monday’s episode in St. Croix are up. The first one is brief synopsis of Sean’s group date with Catherine, Lindsay, and Desiree. The second clip is footage of Sean talking to Chris in the deliberation room about how he didn’t need a cocktail party that night. And the final clip is of some bogus tradition that I’m sure was made up just for Sean and Tierra’s date. Enjoy:

The Bachelor Sean Recap Including Selma Speaks, More Tierra, & an Update on the Lawsuit
“Reader Emails,” & the Premiere of “Burning Love” Season 2
To Top