It’s been a rough couple days for me, I have to admit. No, not feeling the effects of another birthday passing. Everything is fine health-wise, Maddie is fine, and things are great with the site despite the lackluster ratings Desiree’s season is pulling in. I found out I’m suffering from what is known in the medical world as I-Can’t-Believe-That-Dude-Knocked-Up-Jennifer-Love-Hewitt-So-They-Decided-To-Get-Married Syndrome. Not sure how many others in this world are affected by it, but it hit me hard on Tuesday when the news first broke that she was pregnant. Then to follow it up the next day with the cover story in US Weekly that they got engaged, well, that was just the icing on the cake. Because we all know, the smartest thing to do when finding out you’re pregnant, is to get engaged because, well, that’s the right thing to do. Considering how unlucky in relationships she’s been her whole career, this makes zero sense. I’m guessing this is not the way she planned it to go down considering how wife/baby crazy she’s been forever. After I post today’s column, it’s back to balling up in a fetal position through the weekend. At some point, I’ll get over it. Gimmie time.

Hey, whaddya’ know? Melissa Rycroft and I finally agree on something. She did this interview the other day with Yahoo! and I can honestly say, I don’t disagree with one thing she said in it. Granted, this is all stuff I’ve been telling you for years when it comes to this show, but, it’s always nice when people who went through it admit the same thing. Not to mention, this is someone who got engaged at the end, which is completely ridiculous. Enjoy…

A lot has been made about Desiree’s guys this year, and plenty of you have expressed your disappointment in the lack of quality guys her group seems to have. Well, fear no more. We’re only two weeks into the season, and the tabloids are just getting ramped up trying to dig out all the dirt they can on these guys. Lets take our good friend Brandon for instance. Apparently dude likes calling in bomb threats in his spare time. Brandon claims it was all a misunderstanding, but if the “National Enquirer” is reporting it, I firmly believe it. Usually the police aren’t too fond of it when you do that. I got an idea Brandon. Next time you’re at the airport, when you’re going through the security line, just start chatting up the person in front of you telling her you have explosives in your bag. TSA gets a kick out of stuff like that and they’ll probably join in. If they were able to dig that up about Brandon’s past, I can’t wait to see what’s next for some of these other guys. Or even Brandon for that matter.

I think it was in last week’s “Reader Emails” where someone asked me about doing a “Where Are They Now” for previous contestants. As I mentioned, I’m not really all that interested in these people once the show is over unless they happen to become acquaintances, so finding out what they’re up to doesn’t interest me much. If someone wants to know something that bad about what a guy or girl from episode 3 back 10 seasons ago is doing, I’d suggest a Google search. Have any of you been wondering what former “Bachelor,” Captain America, Doctor, and all around Humanitarian of the Year Andy Baldwin was up to and how his love life is going? Well, check out this email I got the other day: 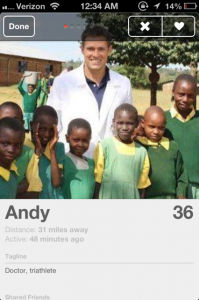 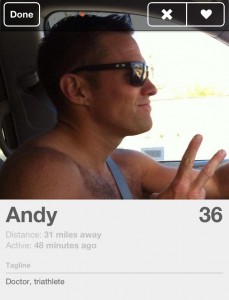 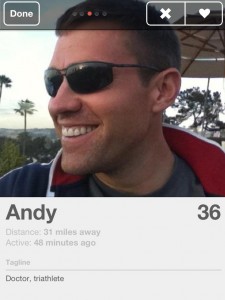 Yes, I find that incredibly amusing. Maybe I’m just getting old, but I had no idea what Tinder was until about 2 months ago. If Andy Baldwin has to resort to Tinder to start trolling for some strange, then that makes me feel better about my single self. Is there anything more superficial, low brow, and just seedy than Tinder? So hey, if you’re in or near the DC area, go join Tinder and see if Andy Baldwin “accepts” you. And oh yeah, Jef Holm is on Tinder as well. At least he was for a while. I rest my case. Please ladies, anyone of you on Tinder, if you ever come across any former “Bachelor” contestants during your “search”, send them my way like this woman did. Hilarious.