Well, happy “Bachelor” season to everyone. Back with another riveting, pulse pounding, edge-of-your-seat season which has exactly the same formula as the previous 26 before it. Except they threw in a little Latin spice this year for your taste buds to make you sweat a little bit. I’m sure it’ll be riveting. In case you’ve been living under a rock, don’t own a twitter account, or didn’t own a TV until yesterday, we are now in the month of Juan-uary. Because the promotions department at ABC decided some intern making $10 an hour needed to earn his money so they asked him to come up with some cockamamie promo tool for this season that’ll be more vomit inducing than hearing “What Does the Fox Say.” Well give that intern a raise because he somehow managed to flood our ears with “Juan-uary” for the last few weeks. What is Juan-uary you ask? Well, it’s a month full of Sunday night programming all dedicated to the “Bachelor.” Last night was the introduction, and next week will be a behind the scenes look at what happens to women that don’t receive a rose tonight, footage of the 18 women who did receive a rose moving into the mansion, and construction on Clare’s “Winter Wonderland” date filmed in September at the Calamigos Ranch in Malibu to start off the season of dates. The following two weeks really aren’t Juan Pablo related, so, the Juan-uary thing doesn’t seem to make much sense. Here’s the calendar: 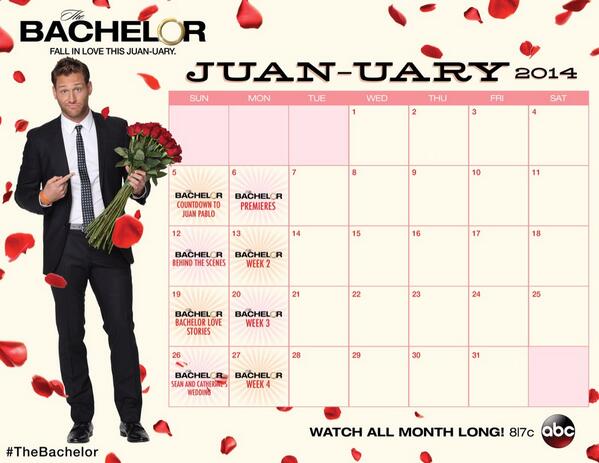 Basically just a way for the network to bring more eyeballs to their franchise. Is it overkill? Of course. But you know what ratings they get if they don’t run anything “Bachelor” related the next three Sunday nights? Zero. So I guess they figure they might as well run something. Although next week’s show is going head-to-head with the Golden Globes, and Sean & Catherine’s wedding on the 26th is up against the Grammy’s. Good luck with that. Oops. How quickly that fortune has changed. That intern should probably start looking for a new gig. Normally I don’t write columns on Monday, but I will this month since there’s programming every Sunday night. I’ll probably just do some quick recaps of what we saw since there probably won’t be too much content in these one hour shows.

This morning I joined the “Kidd Kraddick in the Morning” team to talk all things “Bachelor” related:

And of course, be sure to check out the “Bachelor” Juan Pablo’s episode-by-episode spoilers. Lets get started with last nights episode…

-One thing last night’s show did that was at least different, was show us footage from the final casting process that happens in LA months before filming even begins. We saw footage of Kat, Chelsie, Andi, and even Nikki sitting in with producers getting interviewed about how bored they would be having Juan Pablo as the “Bachelor.” Or something to that effect. It also showed plenty of clips from audition videos of girls that didn’t make it. I think I like the one of the girl who could shove her fist in her mouth the best. Not sure why, but she seems to have quite a talent. Or how about the girl who admitted she lost her virginity just two weeks prior? Nice. I’m sure mom and dad loved seeing that.

-In one audition video, we saw current contestant Christy Hansen showing off a major talent of hers, which was touching her nose with her tongue. This was fascinating and extremely hot. Apparently Christy is currently hanging with another contestant Kelly Travis, since Kelly tweeted this picture out last night of Christy showing all the guys how impressive her tongue is: 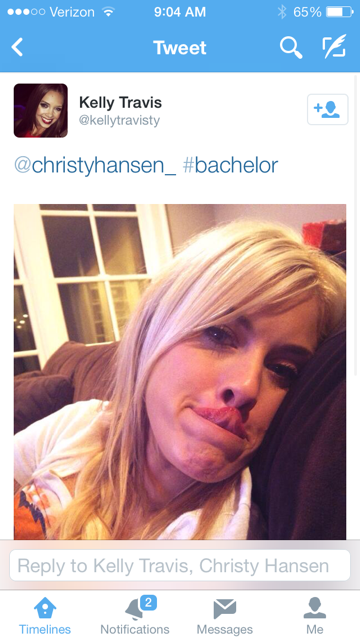 Who wins between Christy’s tongue and chick who can ram her fist in her mouth? Close call.

-The real ridiculousness of last night’s show came next when Chris Harrison and producers tried to pretend they were surprising girls by showing up at their work and home to tell them they were on the show. This couldn’t have been more staged and these women couldn’t have acted any less surprised if they tried. Chris showed up in LA to tell Lucy and Elise they were on the show. Producers gave roses to Christy, Alli, and Lauren H. None of that was real. All those girls already knew they were on the show and were just told to act surprised. They weren’t. Fail. Not to mention, when Christy was on a phone calling a friend to pretend like she had to pack and leave that day? Please. Filming wasn’t for another 3 weeks after that was shot. They must really think their audience is stupid. Oh well. That’s why I’m here.

-They then gave us a little insight into Juan Pablo’s life which consisted of his job hanging out with baseball players and collecting their jockstraps or something to give to the Venezuelan Baseball Hall of Fame. I mean, Juan Pablo was on six episodes last season and we knew nothing about him so I guess this was necessary to show us he actually does work. I think. For those unaware, he was born in New York, moved to Venezuela when he was 2 and lived there until he went to college to play soccer in Rochester, NY. Latin guy, has a daughter, likes soccer. Got it. Style over substance no doubt.

-We then get to see Juan Pablo interacting with his daughter Camila, who is four. I love it how because he’s being a father, like that’s some sort of great quality about him. Sh**, I would hope he is a great father. That’s kind of his job. We have to start applauding people now for being a parent? When did I miss this memo? Look everyone! He picks his daughter up from school! He takes her to the park! He sings to her in the car! I’m absolutely convinced Juan Pablo loves his daughter. As I’m sure every parent loves their child. What did you expect them to show us? Him putting Camila in time out and yelling at her for getting a “D” in English?

-If you haven’t noticed by now in 26 seasons, they are going to build up the lead like they are the greatest person walking the face of the earth. They get along with everyone in their family, they’re humble, they’re just someone looking for love, and “Awwww shucks, I’ll just take off for 2 months on a TV show to have my dating life filmed. No big deal.” Yeah, well, Juan Pablo has everybody fooled. He’s an opportunist, he wants to be in commercials and modeling, and most certainly will be on DWTS next season. So when you see those things happen, remember where you heard it first.

-The show then decided to give a tribute to former contestant Gia Allemand who took her own life back in August. Since Gia’s death happened shortly after Des’ season ended, this was the first opportunity for any “Bachelor” programming to address it publicly. But don’t let that mistake you of what really went on behind the scenes. In case you missed my tweets last night, I can tell you that there was not one member of the Bachelor production team that attended Gia’s funeral, nor did the show send any sort of flower arrangement to the funeral. This is not my opinion, this is not me speculating, this is not me hearing some rumor and running with it. This is a fact that cannot be denied. Ask anyone who was in attendance and they can verify it for you. Juan Pablo’s season had not started filming yet, so it’s not like they were busy. I was told NBA teams that her boyfriend Ryan Anderson had never even played for thought enough to send flowers, yet the production team that cast her for THREE different shows (Bachelor, Bachelor Pad 1 & 2), that spent countless hours with her, did not bother to show up, nor send a card or flowers. Disagree with my opinions all you want. I expect that. But don’t try and tell me I’m wrong on that story when it’s factually correct.

-The reason why RealitySteve.com is successful, and the reason why people come to this site I believe is so that not only can you read the spoilers, but also that you like to be entertained, and you want to know what kind of things go on behind the scenes that 99% of America has no idea about. I have that information a lot of the time. Well, this is one of those times. Some people on Twitter took me to task for relaying this information last night, and that’s their prerogative. I’d say it’s fairly important that people knew no one from the show’s production team attended her funeral. Of course the show had to address Gia’s death. They’d look like the biggest a**holes if they didn’t. However, knowing that none of them bothered to show up for her funeral I’d say says more about them then running a retrospective five months after the fact.

-I mean, even at the end of the Gia piece, it says “For more information go to ABC.com.” You couldn’t give out the Suicide Prevention website or phone number on your screen? You had to say go to ABC.com? I went to ABC.com. Then I had to click on “The Bachelor,” then I had to click on “Remembering Gia,” and THEN that finally brought me to the info on suicide prevention. I just thought it was them trying to save face and look good to the public, when what really went on behind the scenes is much more an indication of who these people are and how they treat their own. You are yesterday’s news when you cannot affect their bottom line. That’s the sad reality. Go look at Mike Fleiss’ twitter account. The creator of the show. The head honcho. The Big Cheese. Gia died Aug. 14th. It wasn’t until last night that Mike Fleiss finally had the time apparently to type out 140 characters acknowledging her death. First time he’d mentioned anything about Gia on Twitter. And he’s tweeted a bunch of times since August 14th. Pretty much should tell you all you need to know.