Quite a few of you emailed me yesterday asking where was my recap regarding Sunday night’s “Bachelor: Love Stories” episode. Ummmm, what was there to say? It was a bunch of couples holding hands walking along in parks talking about how great their relationship is. That’s great for them, but I didn’t think there was a whole hell of a lot to dedicate a column to. We know the show loves trotting out all their success stories to keep fans with that hope that this show ultimately works, when in reality, those couples are the exception rather than the norm. Here’s what I’ll say for all five of the couples: I think a major part of their success was moving out of LA and not getting caught up in the Hollywood aspect of it. I think they’d all agree that played a part in them lasting. Not saying it’s a guarantee if you move away you’ll succeed, but it does a play a big role. Hence the reason Juan Pablo and his girl are going to fail. He loves every minute of the spotlight, wants to be in it, wants to be famous, wants to move to LA, and wants be involved in Hollywood. Not to mention other factors, but that is definitely a major role. Lets just say his girl is being played and there’s almost a part of me that feels sorry for her. Almost.

Get your “Reader Emails” and “Dr. Reality Steve” emails in for this Thursday to steve@realitysteve.com. I’m gonna try and stay away from all emails concerning Juan Pablo’s comments last weekend. Sure, I’ll throw a few emails about it in there, but we could literally talk all day every day about it if we wanted to. There is so much I could write about the Juan Pablo situation that broke over the weekend, but I’m going to keep it pretty short since I spent all weekend talking about it. Trust me, this first page was waaaaaaay longer before I decided to go this route. If you’ve been living under a rock and haven’t heard what he said, listen to this clip:

One thing worth pointing out. At the :28 second mark, Juan Pablo says, “I respect Peter right there…he’s my boy right there…he spend every day with me and he has his partner and I respect that 100%.” The guy he’s referring to is producer Peter Geist who was his main producer during the filming of the show essentially with him at all times & was with him at the event on Friday – and who happens to be gay. He’s dating one of the other producers on the show, Marco Franzitti, and neither of them hide the fact they are together. 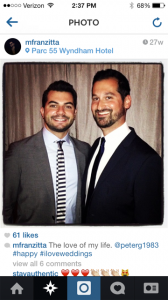 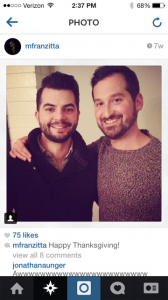 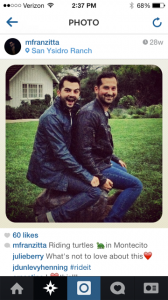 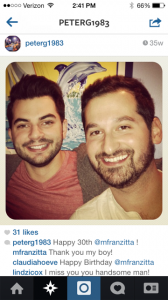 So before anyone says, “Why wasn’t there someone at the event making sure he didn’t say something stupid,” just know someone was pretty close to him. How close? I don’t know. But close enough for Juan Pablo to acknowledge him in the clip. ABC then immediately came out and released a statement essentially distancing themselves from what he said and putting it all on Juan Pablo. Then, as expected, Juan Pablo released an apology (obviously written by someone else), basically because he had to. Lets not forget, ABC has received awards from GLAAD just this past year for being one of the most gay friendly networks on TV. Of course Juan Pablo had to apologize immediately. The story was on the cover of four major entertainment websites Saturday afternoon. This was a big deal to people or else it wouldn’t have been covered by everyone. Whether you agree with his take or not, you cannot dispute this was a major story. He’s the lead on a network television show watched by millions of people a week. It’s a big deal when you say something, caught on tape nonetheless, that offends a certain group.

I literally had 13 paragraphs written about what I wanted to say, and now I’ve basically narrowed it down to three. No point in going on and on since, in the end, it didn’t really have much effect on the show. It’s not like the show would get cancelled over it, or ratings would plummet. Please. Either you’re going to watch or you’re not. Yeah, maybe a few people here and there got pissed and decided not to watch last night because they thought what he said was insensitive, but it had ZERO effect on the ratings like I figured it would. Last week they drew 7.88 million viewers, ratings last night drew 7.82 million. We can debate all day long whether or not you agree with his view on gay parents raising a child. That wasn’t “taken out of context.” He made it clear how he felt about that. Some people agree, some don’t. Whatever. The problem was him throwing in the “gays are more pervert” line. Now, the Spanish word for “pervert” is “pervertido,” so blaming the language barrier seems a little hollow, but again, whatever. The fact is he said it, it most definitely was him struggling to find the word he was looking for, and now it’s just another thing I can make fun of him for. Do I think he hates gay people? No. Do I think he’s ignorant and should’ve deflected the question and never answered it in the first place? Absolutely. He should’ve known not to answer the question or to dodge it, and the second he started to go off on a :90 rant, you knew there was trouble. His own fault. He made his bed, and now he must lie in it. And if you don’t think that him calling gays “more pervert,” whether that’s what he meant to say or not, isn’t gonna be brought up numerous times in my column the rest of the season, well, then you haven’t read me for the past 10 years. It’s what I do. He said it, not me. So I’m going to make fun of what he said.

So rather than keep those 13 paragraphs I had written in the column, I’ll give you a cliff notes version of everything that popped into my head when this story broke Saturday, along with my short answers to them:

1) How could ABC not think that SOMETHING like this could happen this season with as bad as his tweets have been, and the fact he admits he struggles with the language? Lets be honest. NO ONE should be surprised something like this came out of his mouth. ABC is just as much to blame here as anyone for casting someone like him. And they know it.

2) Why wasn’t anyone more stern with him about avoiding questions regarding anything religion, race, or sex based? I’m sure they were. He either chose to ignore it, thought he had a good answer, or maybe (and this is the one I’m leaning toward) he had no clue what he said offended anyone until he was told. You think JP walked away from that interview saying, “Crap. If that gets out I’m in deep sh**.” I certainly don’t. He only realized it was bad once it got out. I firmly believe he still doesn’t understand why what he said was wrong.

3) Did the reporter ask the question in hopes to maybe get a controversial answer? I absolutely think so. I think the second that reporter didn’t hear, “No comment,” or, “Oh, I don’t know. I never thought about that,” he knew he had gold.

4) His apology? Obviously written by someone else. Ummm, we’ve seen his tweets and his Tuesday blog on People.com. He doesn’t write like that.

5) His tweets since the apology? This is where he’s going about it all wrong. He’s STILL trying to defend himself. You don’t think? Then why is he saying stuff like the first one, or retweeting the other three? 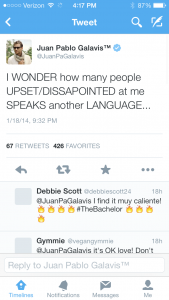 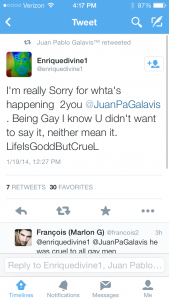 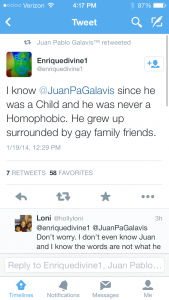 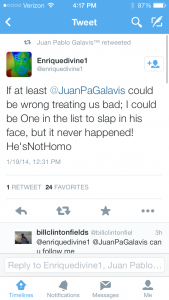 All that is is him saying, “Look everyone! See! I don’t dislike the gays! I have gay friends!” Worst PR move he could’ve made. The more he retweets stuff like that, the more hollow his apology sounds. You don’t apologize and then CONTINUE to try and state your case. Your apology falls on deaf ears now.

6) Now he’s going to meet with the Latino Director at GLAAD for counseling? Damage control.

7) Does this affect his DWTS chances? I think so. I’d be surprised now if he’s on it.

8) So is he sorry for the calling gays “more pervert” or is he apologizing for his stance on gays? Sounds like he was just apologizing for using the phrase “more pervert” to describe the gays, which he had to do. I truly don’t think he thinks he said anything wrong, and that’s where the ignorance comes in. In this day and age, where gay marriage is becoming legal in more and more states, and television is so much more accepting of gays on TV than they used to be, you CANNOT say what he said. No matter how strongly you feel towards it. It was a stupid statement to make, he got his slap on the wrist, and we move on.

I wanted to dive deeper into each of those topics, but ultimately in the end, I decided it doesn’t matter. It didn’t affect the show at all last night, he apologized, and we move on. But to say “We shouldn’t even be talking about this. It’s not a big deal” is about as close minded as you can get. Is it a big deal in the grand scheme of things? No. Is it a big deal within the “Bachelor” bubble? Of course, so yes it’s worth talking about. Once this story broke on Saturday, do you know how many emails, tweets, and texts I got asking my opinion on it? Of course it’s an issue and of course I’m gonna talk about it. My opinion of the guy is he’s ignorant, not the sharpest knife in the drawer, and his statements did nothing but strengthen that opinion. Actions speak louder than words written by someone else. His tweets since the apology aren’t doing him any favors. Lets see how he actually responds when he has to speak about this on camera for the first time without the help of anyone guiding him. I’m going to continue to make fun of him for a bunch of things, but can now add “more pervert” to the list. Oh Juan Pablo, you silly little rascal you.