Jason Mesnick’s season was the first time I’d ever had a spoiler told to me, and that was back in 2009. Since then, every season I seem to get more and more information given to me, and my track record has proven pretty successful in covering the last 11 seasons this franchise has thrown at us. It really has been a case of the site has gotten bigger and bigger every season to the point where people randomly send me stuff every season that ends up being true. I can’t explain it, I never know where it’s coming from, I just know it’s coming. So once I get it all together, I lay it out in episode-by-episode form for you. Problem is I can never show the evidence of how, why, or where I know these things because usually it’s something that’s just told or texted to me, and could compromise a source. You just have to take my word for it, and I’m vindicated once the episode airs.

So lets just get right to it. I’ll show you the videos, the transcription is underneath each one (the best I could), and afterwards we’ll get into what this all means. What you are about to see is video taken on last Sunday night (hence my tweet at the time) May 11th two days after the final rose ceremony took place. Nick Viall was on US Airways flight 3837 from Charlotte to Milwaukee with a scheduled departure at 7:44pm that arrived in Milwaukee at 8:46pm. Nick is talking on the phone to someone – and loud. The first video is him giving his opinion of Josh Murray, and the second video (a bit longer) is him discussing his time with Andi on the show. I’ve never had something this revealing before, and I doubt I ever will again. Enjoy…

“Yeah, like, Josh won’t say sh*t. Like, he’ll do whatever she wants. He’s not that…he didn’t open up, he just kinda…he just eats, sleeps, and sh*ts and like, has a bad temper, and…you know, and…I mean, he’s really competitive yeah…he’s super emotional, he’s really insecure, and…ummmm, and he uhhhhh….it uhhhhhh….(pause to stuff his face with Cheetos)…and ummm…forgot what I was gonna say…oh and he’s incredibly set in his ways…”

The first :20 seconds or so of this video were tough to make out due to surrounding noise but it didn’t seem like he said anything too revealing. But then it got good…

:23-34…“Because I sensed it throughout the whole thing…and I kept saying to her ‘I can’t wait til we’re in the real world…can’t wait til we get to do this stuff…we just go to, like, K-Mart and just chill…and don’t even have to worry about the this other stuff, you know?'”

1:05-1:48…“But she won’t…it’s ok. I mean…for someone (inaudible)…it’s actually happened once….ummmm, it was the guy with the girl. The guy changed his mind. They’re actually (inaudible) and now they’re still married. But, ummm…she’s incredibly stubborn (looks at woman to his left who thinks he’s talking to loud. Hey, talk as loud as you want Nick. This is gold!)…ummm, she’s incredibly stubborn, and if someone is passive aggressive and bottles it up, it probably…you know what I’m sayin?”

2:06-2:40…“We just…we just clicked…I mean, it was so funny because throughout the season, she had…I had her meet some of my friends (he’s talking about the hometown date of course since that’d be the only time she could meet his friends) and they asked her ‘What is it’ and she said, one of the first things she said to me, she’s like, ‘This is so easy with you…’…she’s like, ‘This is so easy with you…’ And ironically, she’s basically saying, ‘It’s too hard. I can’t do this.’ You know, which, really wasn’t……27 (he must’ve just been asked her age)…she’s basically like, ‘I’m scared sh*tless.'”

(Pause to chow down on more Cheetos)…

2:48-3:00…“No, nope, ummmm, I mean, she went back to what she’s used to…I mean, I don’t know how else to…I mean again…actions speak louder than words, like, I don’t know what else to say other than, like, it seemed like she really changed her mind, like, at the last moment.” 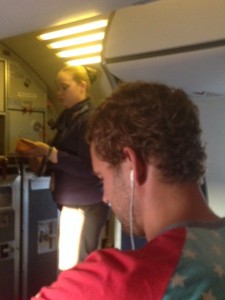 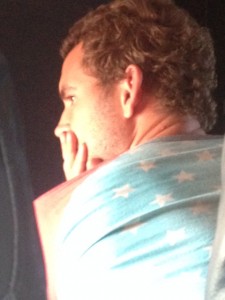 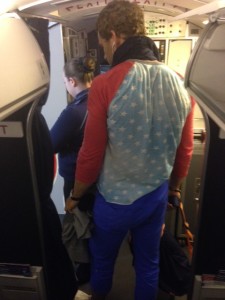 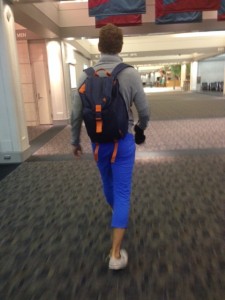 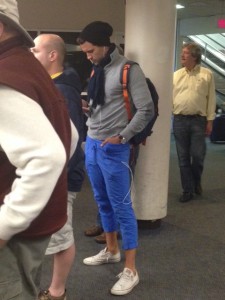 Nice duds Nick. If it wasn’t bad enough you couldn’t wait to get home and take this girl of your dreams to K-Mart, but now you’re rockin’ the blue capri’s and a shirt with stars on it? Did you dress in the dark that morning? Holy moly. I know you were probably flying all day, leaving Dominican Republic and either straight to Charlotte (or into Miami, then Charlotte), but damn. Capri’s? Blue? A fashion maven you are not. Since this was the last leg of his flight, that’s why his handler wasn’t with him.

So what do these videos show us?

-Nick Viall on a plane back to his hometown 2 days after the final rose ceremony took place.
-Nick admitting he met Andi’s parents, which means he was in the final 2 since only the final two guys meet the parents.
-Nick having very strong opinions about Josh, “He won’t say sh*t,” “He’ll do whatever she wants,” “He didn’t open up…he has a bad temper…he’s super emotional, he’s really insecure…he’s incredibly set in his ways…”
-Nick recalling a conversation with Andi saying he didn’t try to change her mind and saying “I disagree.” Also recalls a former season (Jason’s), where the guy chooses the girl in the end but changes his mind saying, “But she won’t…it’s ok.” Obviously the person on the other end asked him something to the effect of “Do you think she’ll change her mind?”
-Sums up his time with Andi with, “Basically she’s saying, ‘It’s too hard. I can’t do this.’
-Then for good measure, ends his call with, “I don’t know what else to say…other than it seemed like she really changed her mind at the last moment.”

So at the very minimum, here’s your proof that Andi didn’t pick Nick (and lets be thankful she didn’t because, c’mon, K-MART? Really? That’s where you couldn’t wait to take her?). It’s clear as day. And Nick spends an awful lot of time either referencing Josh directly, or that Andi “went back to what she’s used to.” Do you really think Nick is spending time talking about Josh if he finished 3rd or 4th? Please. Marcus went home after the hometown dates. Hell, I knew that two days after I had taken those pictures of his hometown date at Highland Park Village. So if you want to spend the next two months thinking that maybe, hopefully, somehow, some way there’s a chance that Andi actually picked CHRIS over Nick, and that Josh was the one that came in third, well, what an utter waste of time. Like I said, the spoilers I gave you up to the final four on May 8th were right, and the spoilers of the final four breakdown I gave you on May 13th were right. Andi is engaged to Josh. This is just some extra proof for you in case you weren’t convinced.

But hey, lets say you’re STILL not convinced for God knows what reason. The best part about this is at the very least, when the overnight dates episode airs on July 14th (unless they switch it with the “Men Tell All” like they did for Des’ season), and you see Chris get sent home at the end of that episode, then they can’t really hide the fact that Nick and Josh are your final two, can they? So even if you’re trying to find a way where she picked Chris over Nick and Josh finished 3rd, on July 14th (two weeks before the finale) you’ll know who Andi chose since at that point Nick and Josh will be her final two, and you now have video of Nick saying everything he did on the plane flight home after filming ended which solidifies she certainly didn’t pick him.

Man, it’s obvious by these videos that Nick just doesn’t get it. I don’t think he’s too familiar with the show. He’s acting like he’s the first person ever to get dumped at the end and was made to believe he was gonna be picked. Nick, it’s called acting. Same song and dance every year. The final two person is blindsided and never saw it coming even though they were told things that made them believe they were gonna be picked. Nick, EVERY lead has to tell you things you want to hear and make you think you’re the one for them. What’d you expect? For Andi to have her arms folded on every date with you and talking about Josh the whole time? There’d be no show to air if the lead only acted like they liked one person because we’d all see it. Sorry you didn’t comprehend that, but you’re now only the 28th person who got taken to the end only to get dumped. She told you she liked you, she told you it was easy with you, she told you all the things you want to hear because she has a show to put on. I’m not saying she never liked you, but to act so surprised that she chose someone else, well, I guess Nick is a bit of a virgin when it comes to this show.

This season I’ve gotten quite a few more exclusives than in season’s past, like pictures from three of the four hometown dates, but I never would’ve expected this in a million years, and I doubt I’ll get anything like this in the future either. Totally random. Pure luck. But hey, I’ll take it. There’s been quite a few things over the years I could’ve backed up with proof, but it might’ve put my sources in a compromising position. If I had proof of say, Craig going home in episode 2, would I share that? No, because frankly no one would care. Since this one was about the ending of the season, and the video evidence couldn’t be any more clear, I figured I’d share it. All the other endings to seasons I’ve gotten right, I’ve always had strong evidence to back it up, but nothing I felt comfortable sharing publicly, so I just give you the spoiler and was content with letting the episode air to be vindicated. I could’ve done the same this season, however, these videos were too good not to post. I knew Andi had chosen Josh about 4 hours before I got this information. This just was just the icing on the cake. I think people realize that any information they give me is safe because I’ve never revealed my sources and never will. So because of instances like this, going forward every season until this show goes off the air, I will continue to spoil it and as you can see, there’s really not a whole hell of a lot they can do about it.