A wild weekend in Des Moines, with Chris’ dates all over social media. If you weren’t following me on Twitter, then today will be a good refresher course for what happened Friday through Monday. Three 1-on-1 dates and a group date. The rose ceremony was last night and they left Iowa today. I know for the last three seasons I’ve spoiled the final four before they even started filming them. I don’t want to just guess at this point regarding Chris’ final four. When I have full confirmation of who the final four are, I will post them. I’m definite on two of them, about 95% sure on the third, but I don’t know who the fourth girl is yet. Maybe social media will help me out this week and into the weekend. It’s been a while since we didn’t get at least one hometown spoiled publicly. We’ll see. Last season, we had pics from all four hometown dates, including exclusives I was able to get for three of them. Could happen again, could not. I never know what I’m gonna get. But anything that pops up on social media or that I receive, I’ll be sure to tweet and retweet even though I’ll be out of town.

Lets first start out by mentioning the breakup of Juan Pablo and Nikki, since it seemed to dominate the headlines the last few days after Juan Pablo posted a picture on Sunday in San Francisco with a female friend, as the two of them took a cozy selfie with the Golden Gate Bridge as the backdrop, only to have Nikki 30 minutes later spit some venom at it: 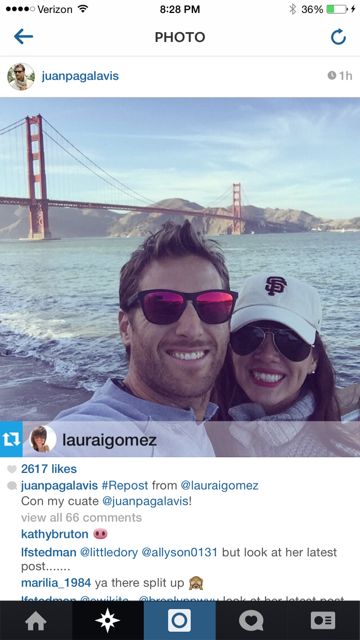 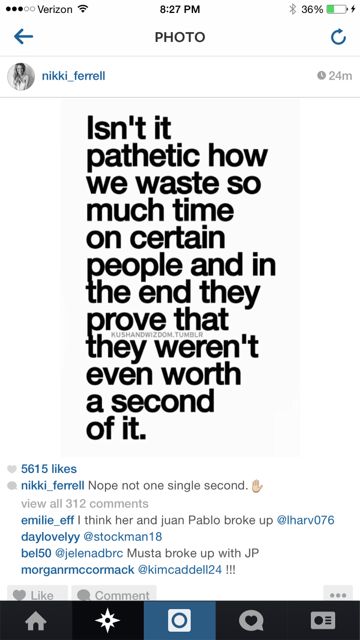 Did Juan Pablo really have to repost that Instagram photo? No. Did Nikki have to respond the way she did? Of course not. For a girl who hated having their relationship so publicly documented, then to take a vicious stab at him publicly for everyone to see, well, that’s about as hypocritical as you can get.

Make no mistake, these two are done and apparently it’s Nikki that broke it off. Don’t be fooled by Juan Pablo’s tweet this morning wishing her a Happy Birthday and hoping for some reconciliation or something. Not sure why it took her so long to realize that he was never going to move for her and never going to marry her (hence the reason he’d never tell her he loved her), but hey, she finally came around and realized what a Grade A douche he is and ended it. Glad she finally listened to what I’ve been saying about the guy from the very beginning. You’re welcome, Nikki. We’ve all had friends in sh**ty relationships where you’ve known their partner wasn’t the right fit, or you knew they’d never last, but that person thinks they’re with the greatest person in the world and they’re just seeing rainbows and butterflies the whole time. No different with Nikki. She was living in a delusional state the whole time she was with him, trying to convince herself that what they had was real, he wasn’t the guy that everyone thought he was, that he really did love her blah blah blah, when in reality, he’s EXACTLY what everyone thought he was. Probably worse. She was blinded by the fairytale. For months she fought for a guy that essentially didn’t care nearly as much about her as she did for him, and it took her 11 months to finally figure it out. Well, better late than never. Maybe now she’ll go running back to ex Ryan McDill.

Anyway, I wanted to show you something that I’ve had since the beginning of August. Juan Pablo and Nikki attended the Hearts of Reality event in Florida from July 31st-Aug. 2nd, which was about a month after “Couples Therapy” was done filming. It’s been going on a few years and reality “stars” from all different shows attend. It’s not a huge event with major coverage, but I remember it did get a little. Anyway, someone who was there one day was passing along info to me about how Juan Pablo barely acknowledged Nikki, and they never held hands or looked happy except when the cameras were around. So they sent me these pictures from Friday, August 1st: 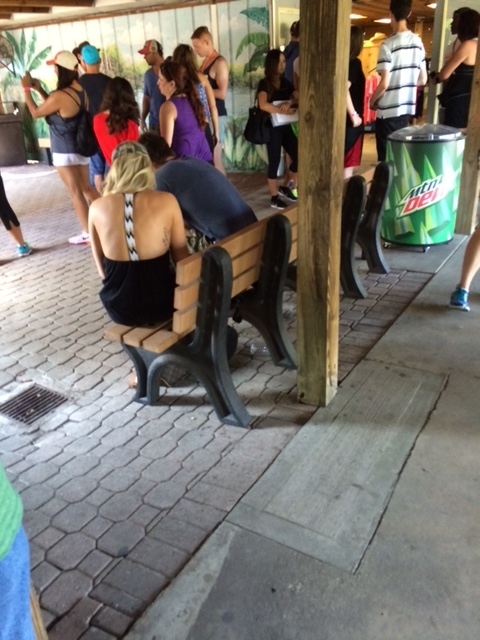 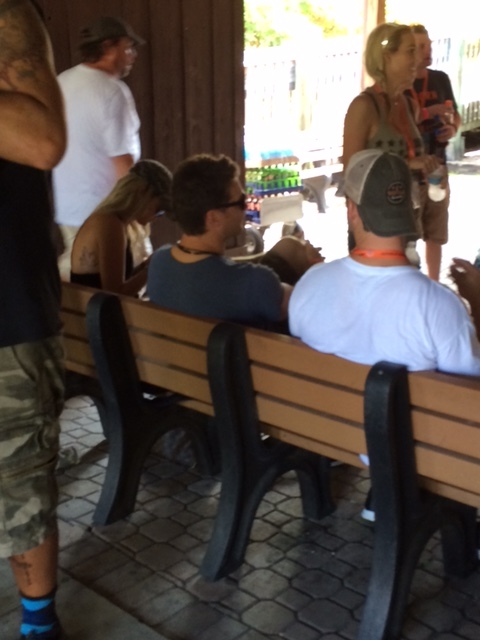 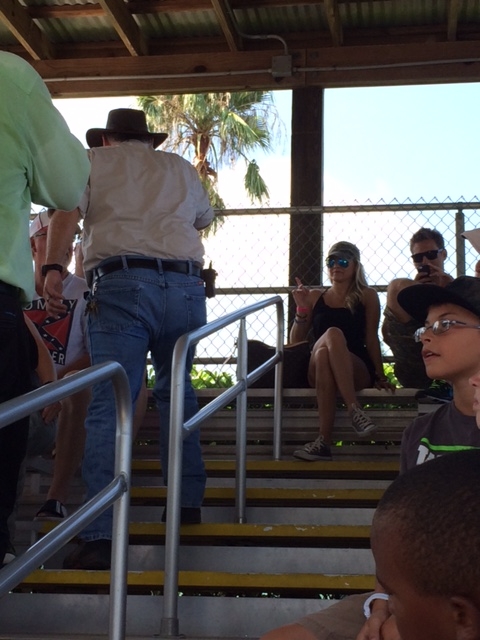 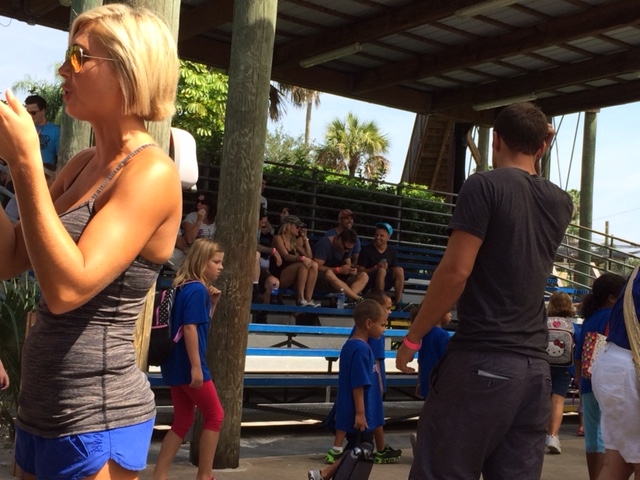 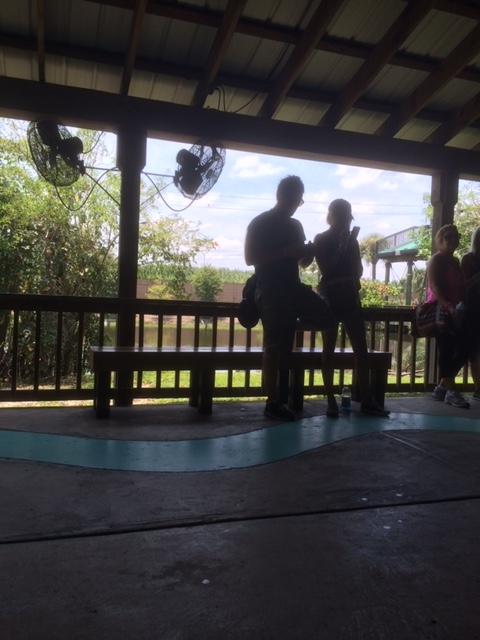 These pictures don’t “prove” anything other than these two are no different than any other couple. But usually anytime JP or Nikki tweeted or Instagrammed photos of themselves, or tabloids have photos of them, they’re purposely posing for a picture, or taking pictures with others looking content. You don’t see pictures like this, so I figured I’d share them. THIS is what their real relationship is like probably more often than not. You might say I’m nitpicking and only are showing times when they weren’t smiling or looking happy, but do you honestly think these 5 pictures were the ONLY 5 times in 11 months where these two were together and not paying attention to the other? The funny thing is, I got pics like these of when Jef & Emily were together as well that I never shared. I think people need to understand that just people you see two people posing a looking happy for a picture on social media doesn’t mean all is right in the relationship. This person essentially told me they saw them all day and these two barely looked like a couple, hardly ever embraced, and only were interested in pictures if it was for media. So, just wanted to give you a little dose of what “reality” really is like in these people’s relationships when the cameras aren’t around.