I know it’s a little ahead of the game, but I’m curious to your speculation of Britt being primed to be the next Bachelorette. I agree that she has many good lead qualities, and I heard Jason/Molly speculate the same on their podcast. But you don’t think the fact she is an aspiring actress would hurt her chances? The show loves to tout its “right reasons” mantra, and with all the focus on Chris’s career in farming and midwest roots, I think it would look bad to cast a lead who is clearly trying to break into entertainment and use the show for exposure. Maybe that’s why they list her occupation as “waitress” when that’s likely just to pay the bills and not her career aspirations. Again, I know most people on their show are actually there for fame/social media purposes, but the lead is a much bigger deal. I would like to know if her occupation will factor into the casting decision.

Also, I definitely agree that Ashley S. was under the influence of drugs this episode.. My husband thinks acid. I think maybe psych meds or anxiety pills mixed with some alcohol. I wonder if she will end up on the next Celebrity Rehab if that show is even on or if she could even be considered celebrity enough for it.

Comment: I don’t think Britt’s “job” has anything to do with whether or not she’d get the gig or not. I think she fits the bill based on the top 6 girls but they’re not gonna take someone from outside that top 6. There’s still time for them to make their decision and go with whoever. I said Britt back in November and I’m sticking with her until I hear otherwise. Yes, others will be considered. I just happen to think Britt will get it. Could be wrong. Could not. We’ll know in about a month or so.

Long time reader, 2nd time e-mailer (your Swedish reader). Have you noticed in Farmer Chris’ accent that he says “caaaaanversation, ..”things we have in caaammon”, Caaalorado River., etc?

I believe this is what is called “Iowa twang” – I have a bout of it after living in Iowa.

Anyway this is not the new esss ok that we had with JP (aka worse bachelor ever), but just something I noticed. Thanks for all you do!

Comment: I have a Swedish reader living in Iowa. There’s a first.

Do you know how audience members are selected for Women Tell All/After the Final Rose?

Long time reader, first time writing…blah blah blah. First of all, your website is totally addictive. I fill compete with my girlfriends in a bracket each year and struggle to stay away long enough to fill it out. I have one question and one comment for you.

Do you have any clarification on what Ashley S. does or where she is from? On your site it says she is from Atlanta and works for a chemical group, while ABCs website states that she is from NY and is a hairstylist. Curious why there is such a discrepancy. ABC site has her as a hair stylist living in Brooklyn.

Also, lot of people seemed really skeptical that someone such as Sharleen is able to get 3 of the top 4 correct on her blog without reading spoilers. I just want to point out how easy the show makes this. I am a casual watcher that fills out a bracket every season. I do not read any spoilers or research the women in any way beforehand, but by the end of the first night its pretty easy to narrow down who the top couple of women will be. I have gotten at least 2 of them correct every time I have completed a bracket.

Anyway, thanks for all your hard work! Really do enjoy your site.

First off, I need to say that I was pretty surprised when I read that Britt eliminates herself from the competition. From the episodes, she seemed pretty decent and happy in her relationship with Chris. Though, with editing and contestant’s “ulterior motives”, I guess looks are all too deceiving.

Anyways, my actual question is about Chris’ reaction to her leaving. How heart broken is he when she breaks the news? It is obvious he cared deeply for her. Does he try to convince her to stay? Is her leaving the reason why he is crying so much in the promo?

Steve, do you think that Ashley S’s schtick is an act and is fueled by/set up by the producers or is it 100% her — or somewhere in between? I think she’s smoking some weed on the down low, but who knows?

Thanks for all you do.

Just though i would write quickly… since i cant listen to your live video chat “live” cause of the time difference… I always watch the day after…
U wanted to know why everyone was so MAD at Andi and Josh for breaking up up blah blah… well I just honestly think that as much u know this show is a bunch of BS u forget and become really invested in these couples… I remember after Ali and Roberto Broke up i was soo upset (donno why i thought those two would last).. and then u remember again that this show is so full of sh1t! lol…as much u know it… u still get invested and assume u know theses ppl!
anyhow I thought i would throw it out there…

Here some more lookalikes for u:

Ive attached pics so u can see the similarity… u may think im totally off… but i DEFF see the resemblance in Becca and Molly!
what u think??? 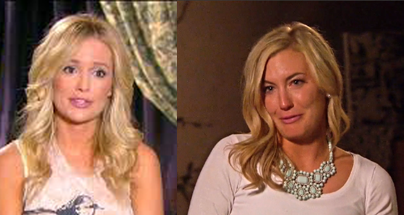 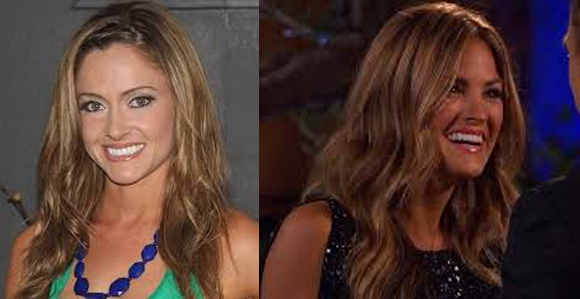 Thanks for what u do!

I have contemplated writing to you many times in the past but I never thought I had too important of a question. Plus I don’t really care what happens to anyone on the Bachelor. (Except Ben. I would still marry him and his permanently sweaty looking hair.) I actually can’t even stomach watching 2 hours of the show anymore, especially now that I have started watching Celebrity Apprentice (it is actually really good this season) and soon Jane the Virgin comes back. (Another really good show.)

Anyways, I want to first thank you for introducing me to Friday Night Lights. I always read about it from you, but never watched until late last year. Game changer. Not only is Tim Riggins (I know he has a real name but I still just refer to him as Tim Riggins) my number one hottie in life, but the show was AMAZING. My friends and I just had to do a Friday Night Lights theme this year for halloween. Texas Forever. I swear I should be getting royalties from that show. I’ve turned a lot of you readers on to it and every one of you has thanked me. Not one person has even said it was “ok” or they stopped watching. It’s the best network TV drama in the last 20 years. Women will like it, guys will like it, couples will like it. It’s impossible not to. And if you don’t, you are a horrible human being. The end.

But my question has to do with The Real World. I am so glad you watch it because everyone in my life has given up on The Real World and The Challenges. Not me. I just turned 29, am married, and had my first kid last year but these shows never get old to me. My husband makes fun of me and tells me I need to grow up and stop watching these shows, but like you, they make me feel better about myself and stuff I did 10 years ago. At least I wasn’t having sex on tv for my parents to see.

At first I thought these new Real World concepts were cool (the ex thing last year and now the skeletons) but now I long for the Real Worlds of the past, where the interesting people were enough to get by. I actually found myself watching old Real Worlds on youtube last week (Chicago and Miami) and I truly believe that if they found interesting enough people, they wouldn’t have to resort to skeletons or other themes. It seems like now every cast will go into it wondering who else will be showing up.

Do you think they will keep doing stuff like this, or do you eventually think it will go back to just seven strangers living in a house together and just having the usual drama?

Keep up the great work!!

First off, the Bachelor is a train wreck that I can’t stop watching. Chris basically kisses people when he has no idea what to say – which is often. Secondly, can’t believe you didn’t cover this in the look a likes, but I think Drunk Jordan looks just like Kacie Boguskie. I had to keep doing a double take.

not sure if you’ve seen this already – but it would appear as though renee herself discussed/confirmed her son’s birth with People. Less than 24 hours after he was born. Even talking about labor etc. I just find this so bizarre!!!!!!! Like did she do this from her hospital bed?

Hey Steve, been following you for a while now, love what you have to say and look forward to your columns. Just wondering after watching last weeks episode if you think producers would ever consider Juelia as a contender for the bachelorette? Her story about her husband seems so tragic and she reminds me of Emily in a sense aside from the fact that Emily’s fiancé died and Juelias committed suicide. Just something I was thinking as I personally would like to see her as the next bachelorette, something to me just doesn’t fit as far a Britt but can’t quite put my finger on it. Would love to know your thoughts.

Do you agree that Kelsey is a dead ringer for a young Jennifer Beals. (Flashdance)?

Always enjoy your column. Thanks for keeping me entertained season after season! I’ve never felt moved to email until this situation with Ashley S. I’m having a hard time chalking her behavior up to editing and feel very sorry for her – she seems to need serious help! Despite what normal conversations Chris S claims they had at times, that doesn’t negate the “crazy” moments. It appears it could be a case of bipolar or even schizophrenia. Doesn’t the latter begin to crop up often in early 20s? I’m no psychiatrist, but it’s obvious, and it’s quite irresponsible of ABC to exploit her and even encourage this to continue (producers’ input likely resulting in her longer stay). I’m sure this will be one of a dozen emails you receive on this topic, and this email will probably be moot after your recap Tuesday, but I appreciate your opinions!

Gosh this show is ridiculous – The Bachelor. I’m grateful that you hold your own and remind people that this is not reality. The show is like a lighter version of “The Hunger Games” with Chris Harrison playing the more mundane version of Stanley Tucci’s character.

Oy. I watch this for sheer brainless fun. And Chris seems to be there authentically but he’s not the sharpest tool in the shed.

Regardless, I appreciate you blasting people who take this show as gospel when it’s clearly fiction.

Comment: People that take this show as gospel are living on a different planet than the rest of us. And trust me, there are a lot more out there than you think who do.