A few things to get to in “Bachelorette” world today including an update on what’s happening with Britt, the Kaitlyn boyfriend rumors, pictures, videos, and notes from last Thursday’s sumo wrestling group date at Universal CityWalk, a date tomorrow in New York, and three more guys to add to the list for this season. Production and cast arrived in New York yesterday and dates will begin today on episode 4. I still don’t know where they’re headed after New York, but I’m sure we will see it on social media once they get overseas. I know some of you have suggested maybe they’re going to Canada because it’s where Kaitlyn lives, but I don’t think that’s the case. I’m pretty positive they’re headed overseas after they leave New York. But we have a bit to get to before we jump into that including probably the biggest news yet surrounding Britt and what’s going on with her. Had heard some things towards the end of last week, had something sent to me over the weekend, then another picture hit social media yesterday, so looks like the cat is out of the bag. Let me tell you what I know:

I had told you last week that Britt had a role on the show this season but I didn’t know what it is. Towards the end of last week, I started hearing rumblings that she was seeing a guy from the show, but I didn’t know who. Well this past weekend, I was emailed this picture of Britt at Trader Joe’s with a guy: 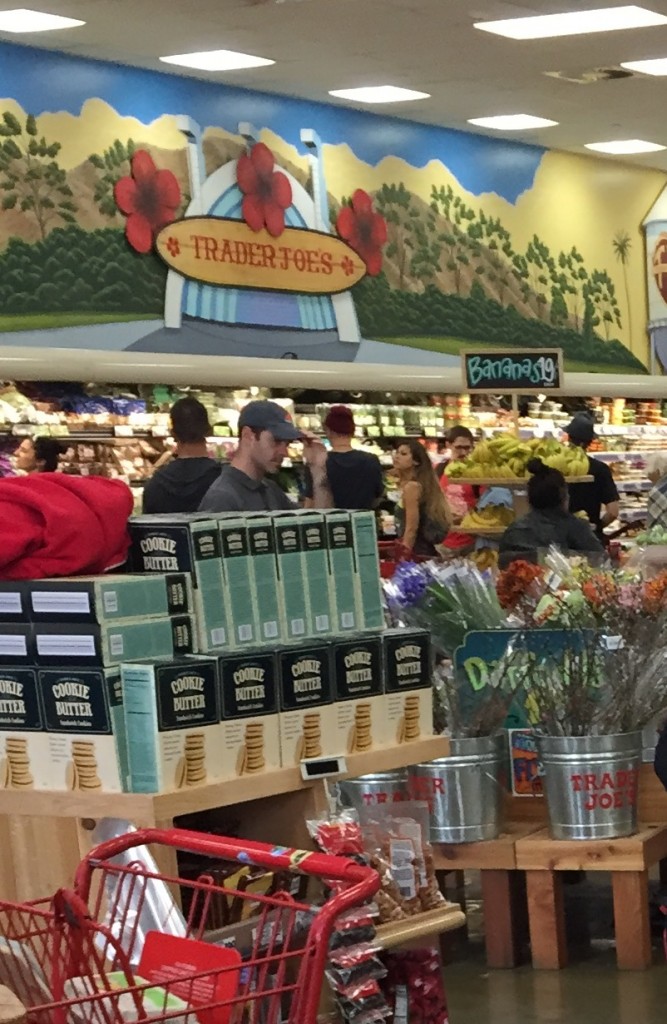 There were no camera crews around them, just the two of them shopping. To me it looked like Brady Toops based on what I had, but obviously there are a few guys this season I still don’t know about. However, I know which guys have been on 3 of the group dates so far, and Brady was on none of them, so by the look and process of elimination, I figured it was him. Then yesterday, this picture was posted to Twitter:

For all you Bachelorette fans, I just saw Britt on Melrose eating Ice Cream on a date w/ a film crew there. pic.twitter.com/p6b3tSxCGg

So yeah, she’s dating Brady (you can see him at Kaitlyn’s Guys).

Here’s what I can tell you. This isn’t a case of where Britt is dating a bunch of Kaitlyn’s rejects and having her own mini “Bachelorette 2.0” going on. This is Kaitlyn’s season. She is who the guys picked, the season will revolve around her, and she will do all the traveling. What I was told was that at Kaitlyn’s first rose ceremony, Brady eliminated himself and told Kaitlyn he wanted to see if he could date Britt. Obviously a lot of things happened between that point and what we’ve gotten to with these pictures, but we now know Britt and Brady are dating.

It doesn’t look like it’s some big production of what’s happening between them, and they aren’t going to be part of some major storyline, but since the Tweet acknowledged yesterday that there was a film crew with them, it looks like it’s something where we’re going to be updated on Britt at some point during the season. I highly doubt it’ll be something every single episode, but I don’t know for sure. These two are dating “privately” so to speak, and now that it’s out there, expect them to be seen out more often.

So it obviously brings up quite a few questions we don’t have answers to yet:

1) Was Britt told that Brady wanted to date her?
2) Is this something he was put up to by producers?
3) How did they arrange their first meeting?
4) How much of their dating will be shown during the season?
5) Could it get serious enough to where we’ll see an engagement at the end of the show?
6) Are any of the other guys who voted for Britt on the first night aware that Brady got to date her and none of them did?
7) What if Brady and Britt decide they don’t want to date anymore? Will they just scrap the whole thing and not show any of it?

A lot of questions we don’t have answers to yet and probably won’t for a little bit. But I can tell you that Brady definitely eliminated himself at the first rose ceremony with the intention of wanting to see if he could date Britt. And now we see pictures of them out and about. So I guess we can call it a matter of semantics when I was told Britt wasn’t dating Kaitlyn’s “rejects.” She’s not. She’s dating one guy, Brady, who voluntarily chose to leave and wanted a chance with her. Should be very interesting to see how it all plays out.

By now a few of you have heard the Star magazine rumors that Kaitlyn had a boyfriend while on the “Bachelor” and they even got back together in between filming. I can tell you that Kaitlyn’s “boyfriend” is no different than any other girl that goes on this show who is hooking up with someone before they leave. He’s not her boyfriend, they weren’t exclusive, it wasn’t some arrangement they had where she left and they both agreed to it. It’s just another tabloid rumor to stir the pot. It’s not based in any fact whatsoever. What is based in fact is that Kaitlyn definitely made out with Zack Kalter at the “Women Tell All” after party back on Feb. 21st. Is that a big deal? Not really. And it’s not that big of a secret since it basically happened in front of everyone who is there. Ask around. They’ll tell you if they’re being honest. I mean, she hadn’t signed on to be the “Bachelorette” yet, and it’s really no different than Sean making out with Jenna Burke during an event in New York a few weeks before he left for filming of the “Bachelor,” although Sean was definitely already the “Bachelor” at that point. Young kids having fun I guess. Can’t fault Sean or Kaitlyn. How is her making out with Zack at the WTA after party worse than her making out with more than one guy an episode once the season starts? It’s not.

Today will begin episode 4 in New York. Not sure what today’s date is but hopefully it’ll get spoiled on social media at some point. New York is pretty crowded in case you didn’t know, so I gotta imagine someone will see something. Anyway, one of the “Bachelor” TV Twitter accounts sent this out yesterday:

The @BacheloretteABC is bringing the heat to NYC! Join us + @RealDougEFresh on a group date 3/25 in Midtown {RSVP Bachelorfans@gmail.com}

So tomorrow’s date will seemingly be a group date and it’ll involve the rapper Doug E. Fresh. We know Kaitlyn likes to rap, so I would not be surprised if these guys have to come up with a rap for her. If I get details on that date, I’ll share it on Thursday with you. So everyone walking around New York today, keep an eye out for a little tiny Canadian walking around with some meathead and be sure to post it to social media. We’d all like to see it.

So as we know, this past Thursday there was a group date at Universal CityWalk. What’s funny is that I had no idea my mom, sister, and niece were up at Universal Studios that day because Olivia had a business meeting for some commercial work she’s doing. I saw my sister post on FB she was there, so I told her to head over to CityWalk and see if she could see any of the taping. Worked out great. They weren’t able to get up close, but here’s a video of the 5 guys and Kaitlyn when the date was pretty much over. Kaitlyn was proud of the guys performance:

8. Ben Higgins: 25, originally from Warsaw, Indiana currently living in Denver, CO. Works as a business analyst for Talisys. Graduated from Indiana University in 2012 with a B.S. in Business Administration. The girl you see him in a few of the pictures is his ex-girlfriend Shaelin Adams. They couldn’t have taken cheesier photos if they tried. He was on the boxing group date for the first date of the season. Bears a crazy resemblance to Peter Brady as well. 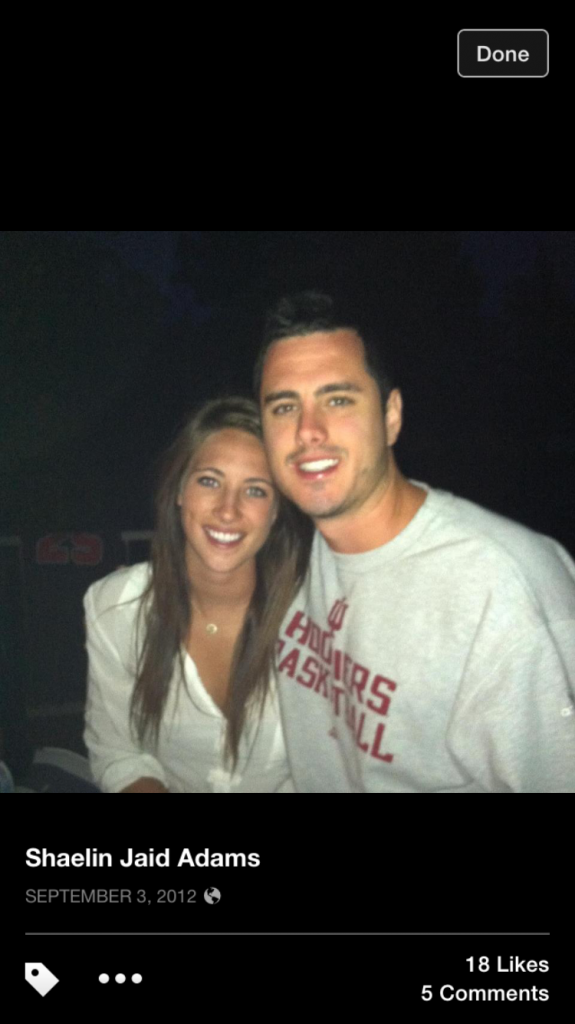 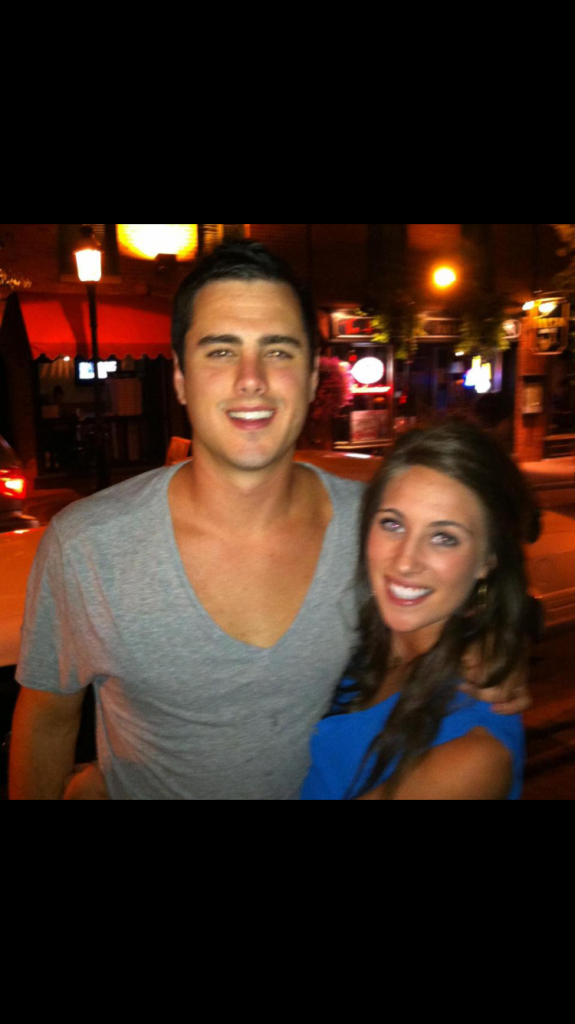 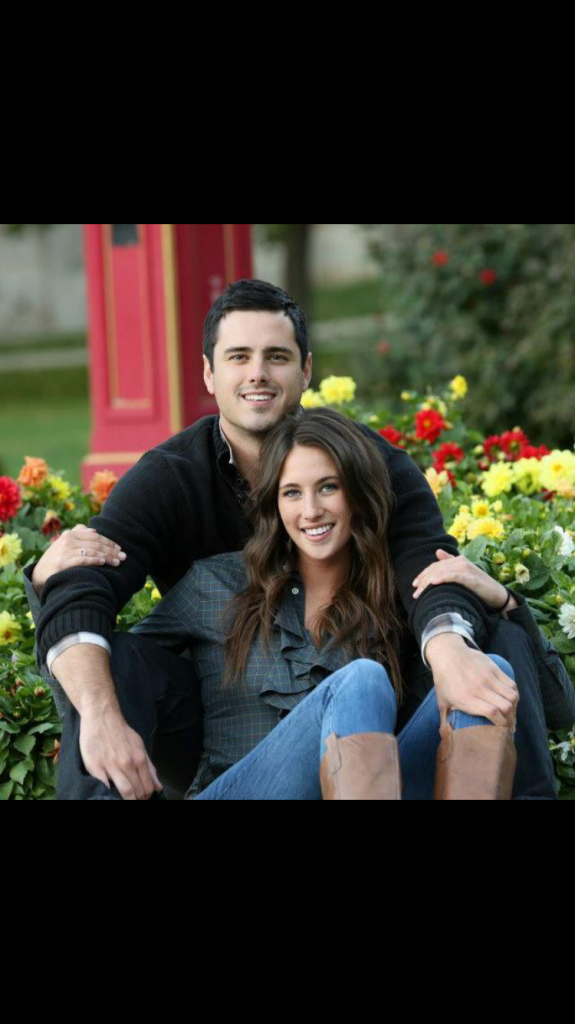 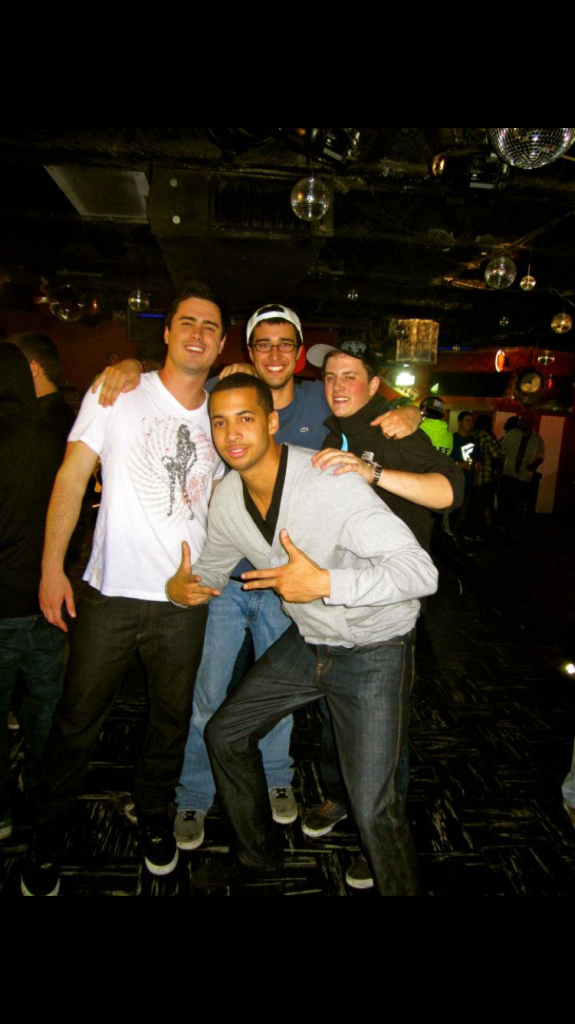 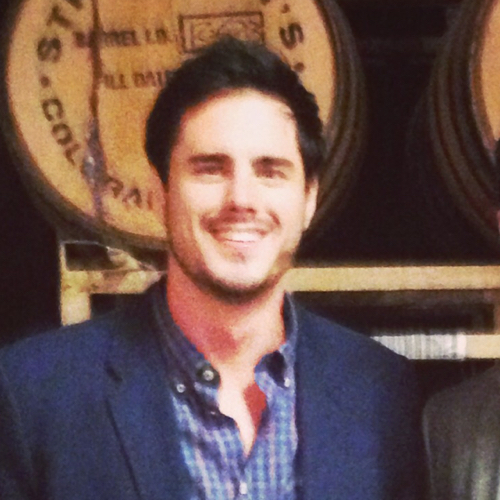 9. Clint Arlis: 27, Chicago, Ill. Graduated University of Illinois in 2010 with a dual masters in architecture and civil engineering. Was a wrestler while there but studied architecture. Currently works as a project engineer at Lend Lease in Chicago, an international construction management and development firm.

He was on the sumo wrestling date on Thursday 3/19 seen here: 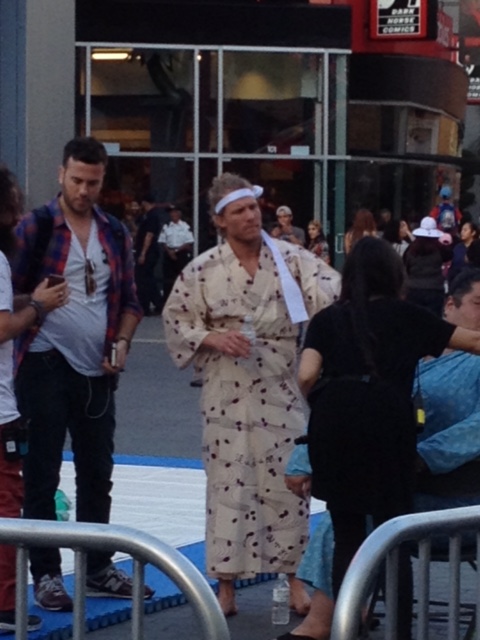 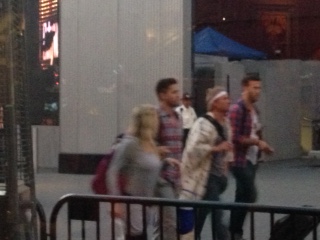 Also, he was one of the lucky ones to get to wrestle the sumo dude probably 200 lbs heavier than him. It didn’t go so well: 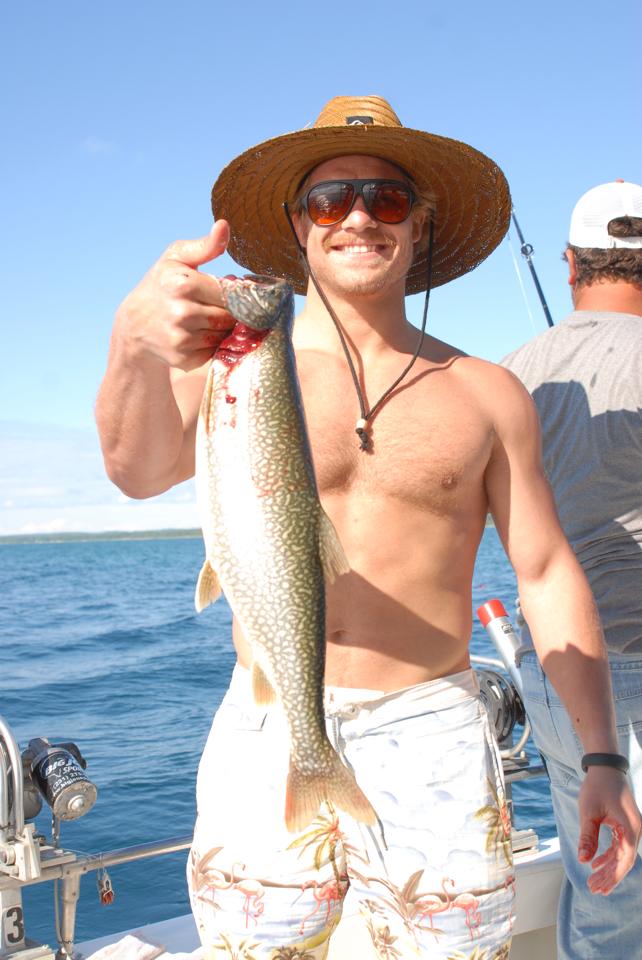 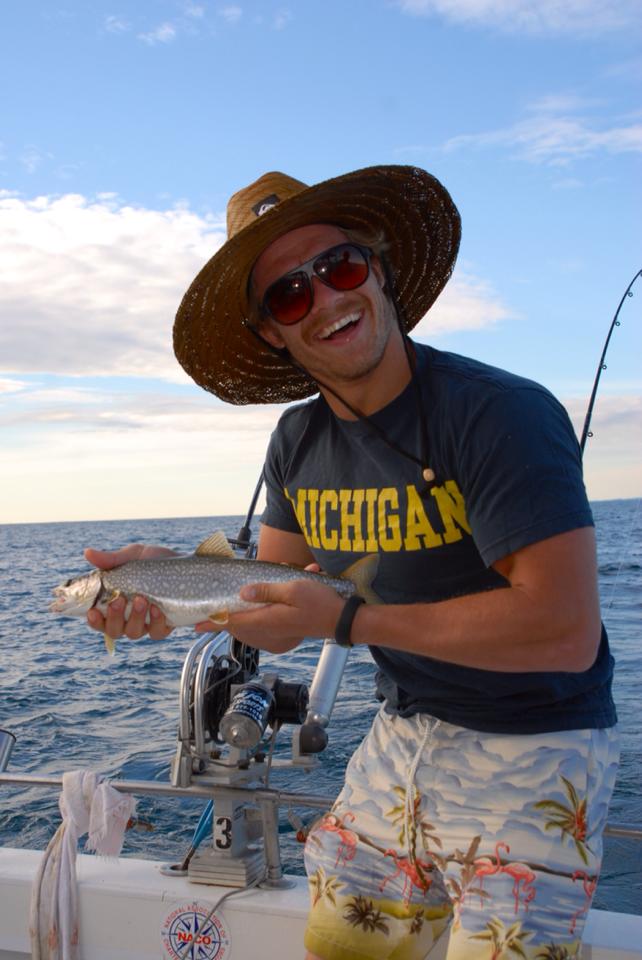 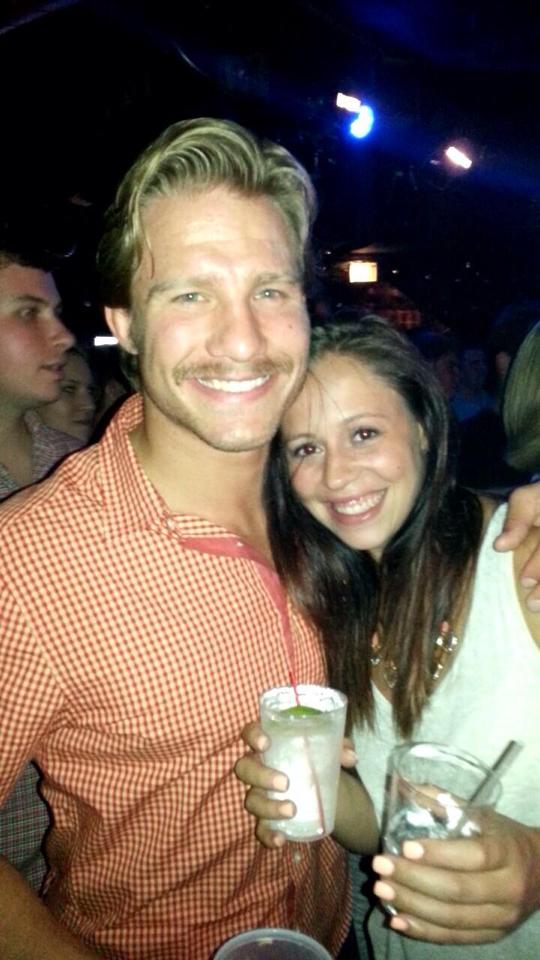 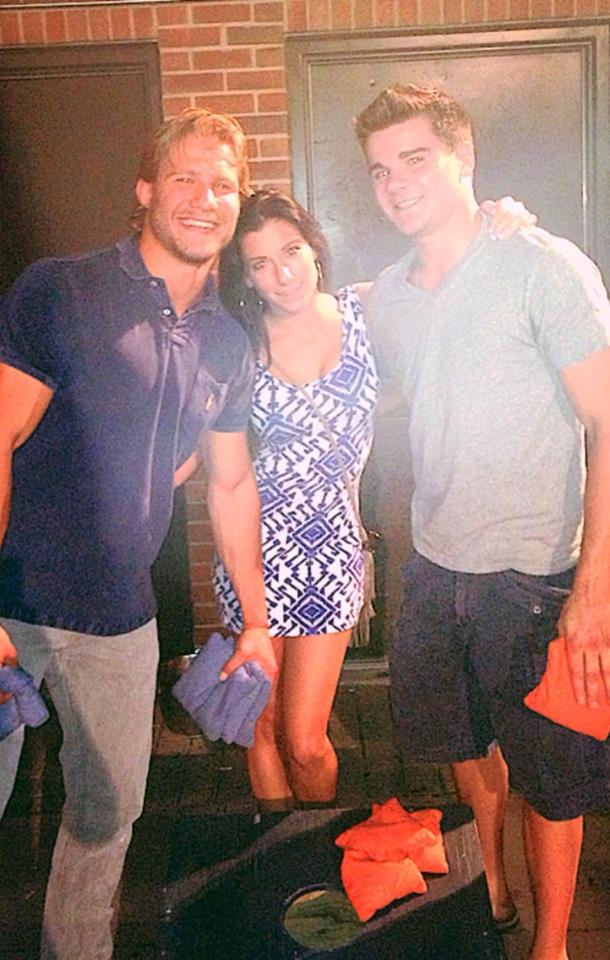 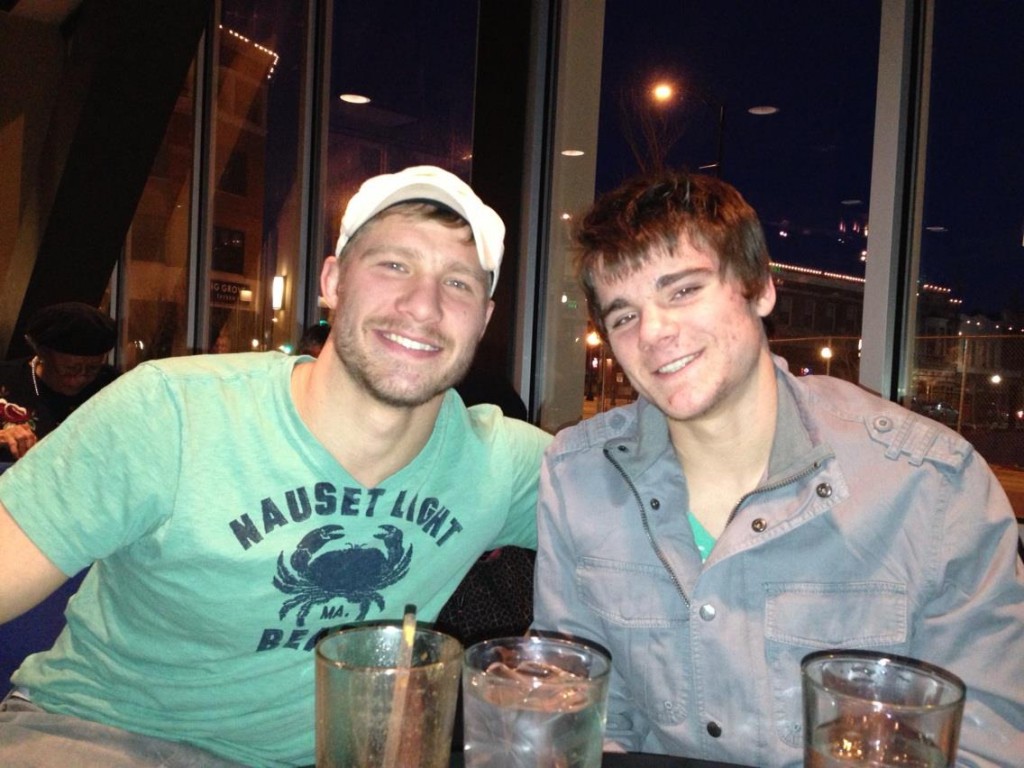 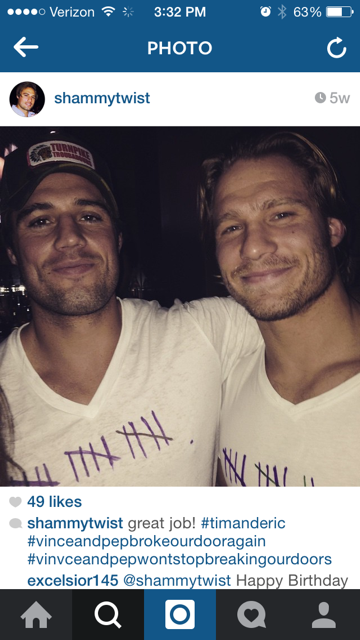 And what might be the greatest sibling photo ever taken with his brother, Logan Arlis , and sister, Taylor Arlis. I can’t get enough of this picture. Already my favorite guy… 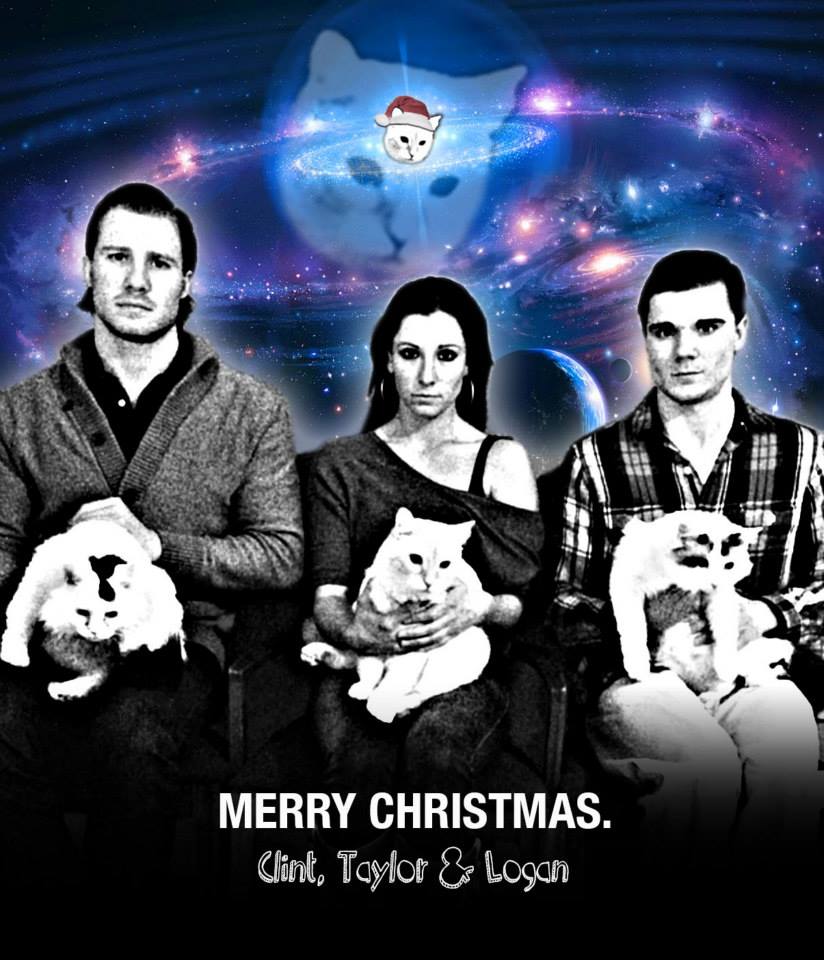 He was on the sumo wrestling date Thursday 3/19 seen here: 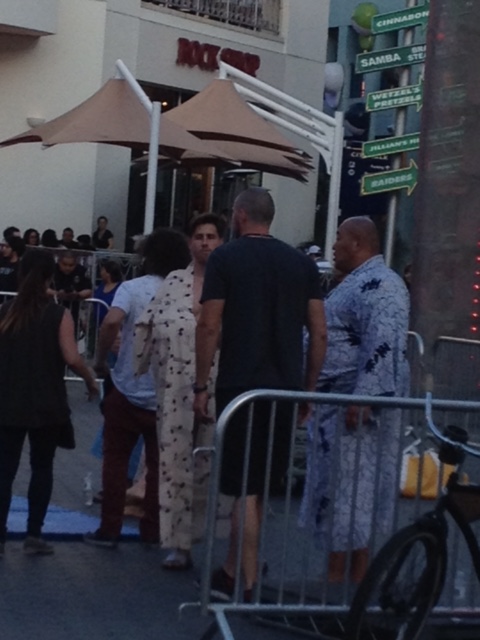 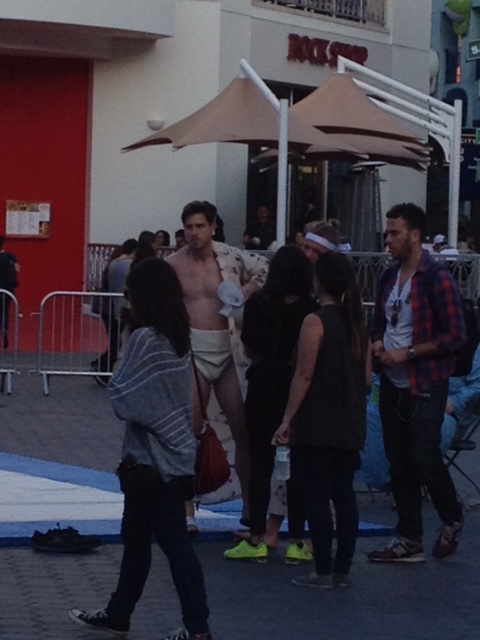 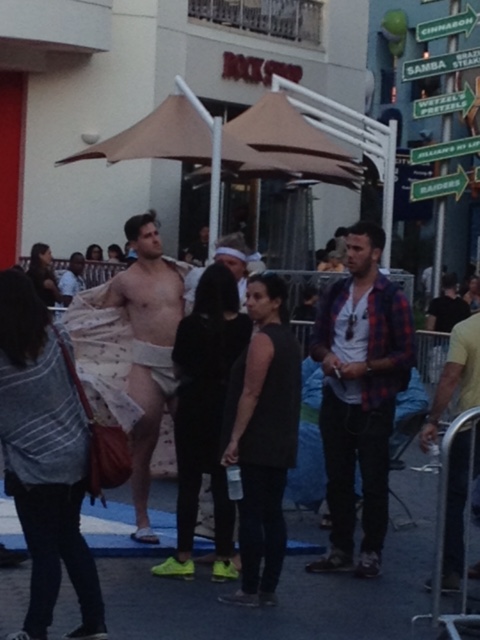 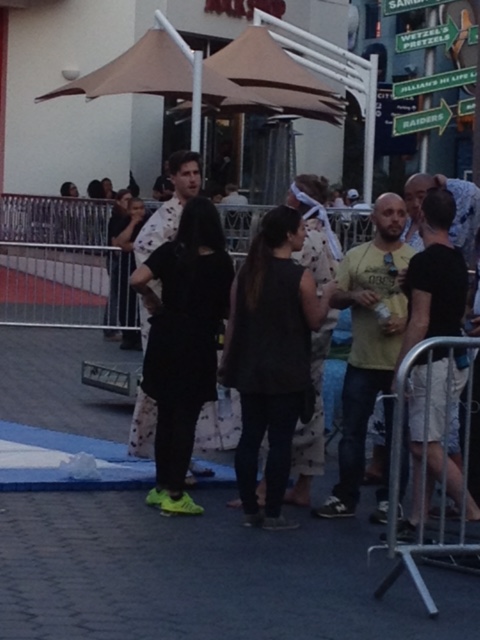 He was also lucky enough to wrestle a sumo guy and get his ass kicked in the process: 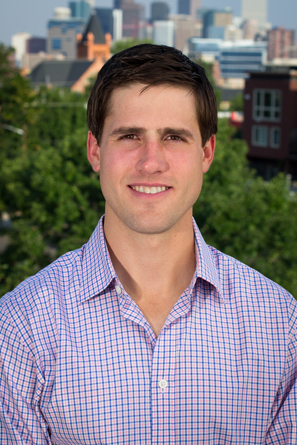 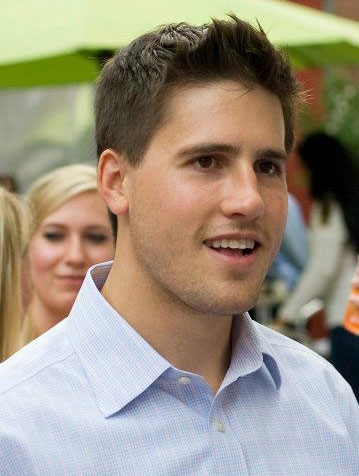 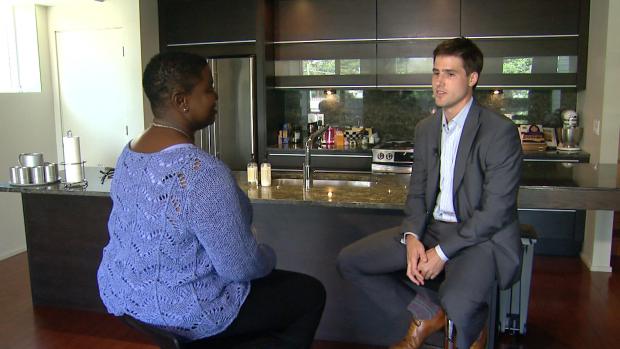 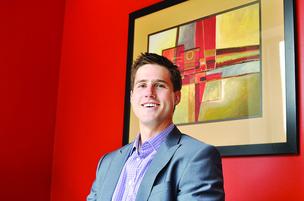 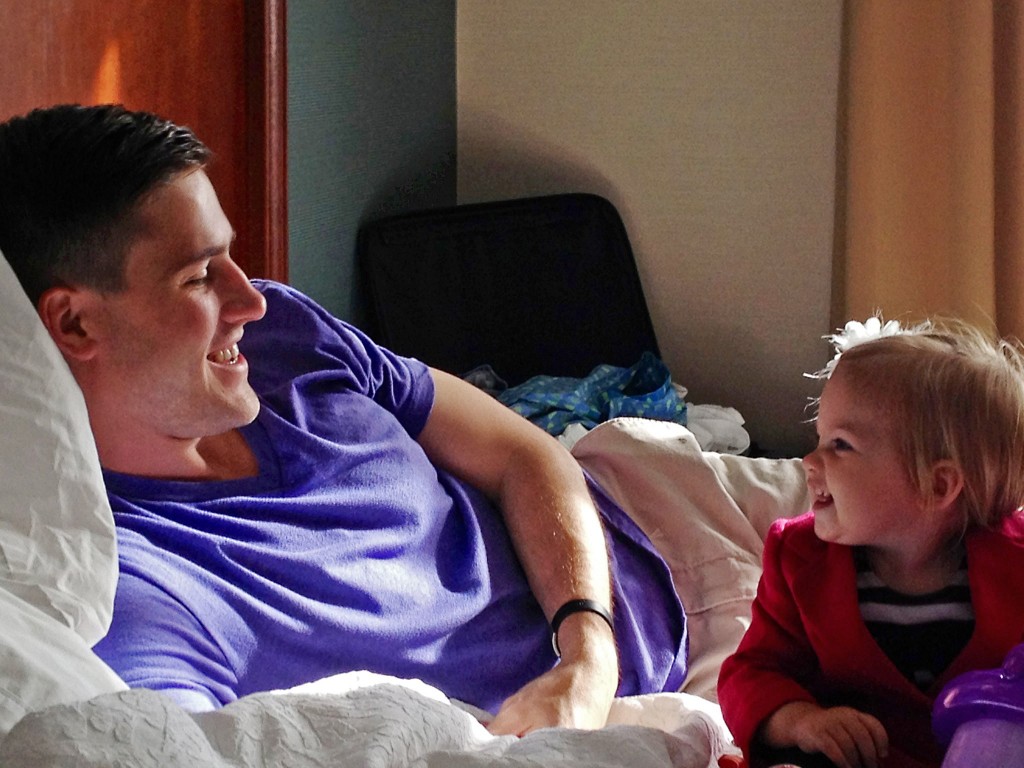 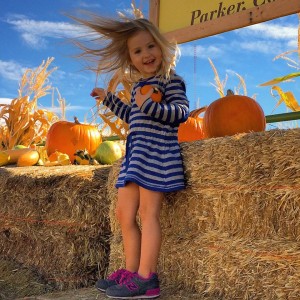