Hey guess what! Jennifer Love Hewitt has finally decided to leave her husband and we’re going to elope! Isn’t that wonderful! APRIL FOOLS!!!! BAHAHAHAHAHAHAHAHAHAHAHA. I kill myself sometimes. I think after I gave the disclaimer yesterday telling you to be prepared for any stories on the internet today being fake, people just decided against it. Outside of Reality Blurred doing their annual April Fools story, I haven’t seen one site post a fake story yet. Then again, I haven’t been on Facebook yet this morning, and I’m sure there are a ton on there. But the major entertainment sites? I haven’t seen one yet. Good. Probably smart of them since no one with half a brain would be fooled for more than a few seconds anyway. And with the way people run with stories nowadays, there’s really no point in putting up a fake one about a celebrity since it could end up spreading like wildfire. In this day and age of social media, I can’t imagine anyone could be gullible enough to fall for any April Fools joke they see on social media. Even ABC exec Robert Mills tweeted out this morning “Big Bachelor news coming!” and immediately people called him out for it being an April Fools prank. He’s yet to even follow up on the tweet three hours later, so I’m sure he’s realized how dumb that was.

Yesterday was a 1-on-1 date for Kaitlyn where she and Ben Higgins were involved in a two-stepping competition. I spoiled this on Twitter in the afternoon and throughout the night, but here are some pictures if you missed them: 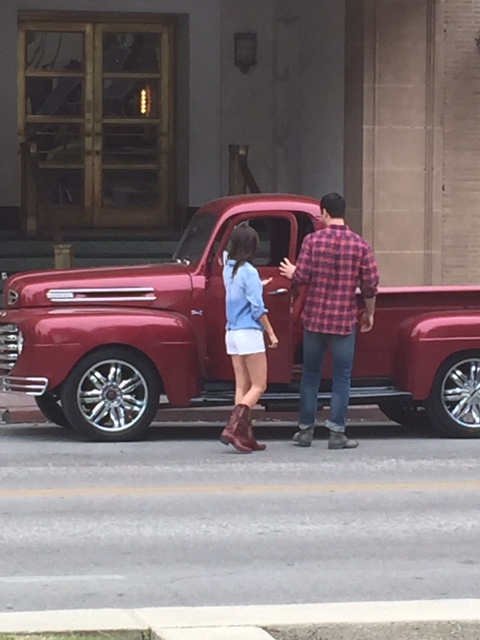 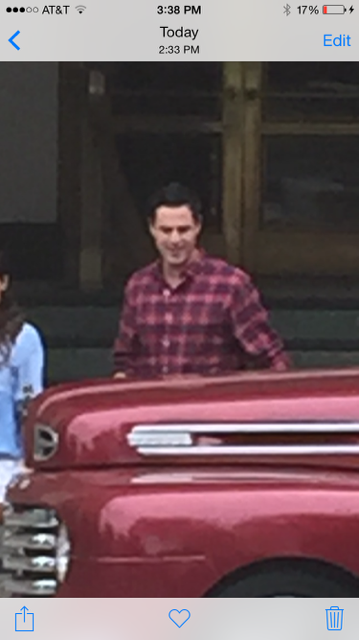 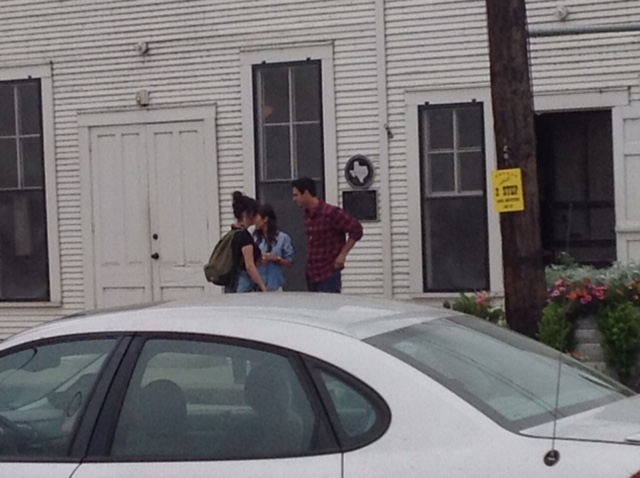 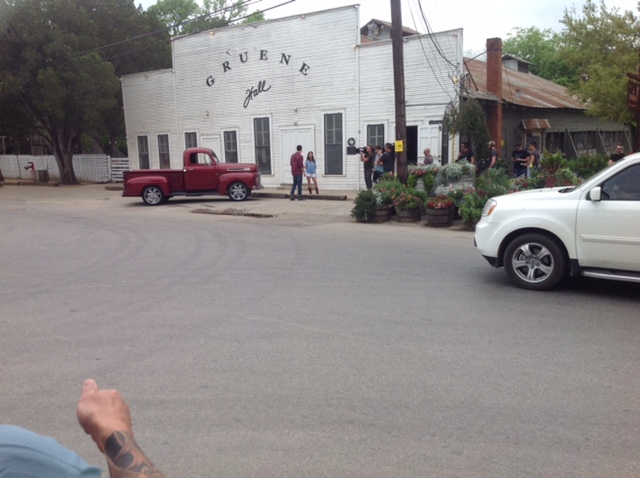 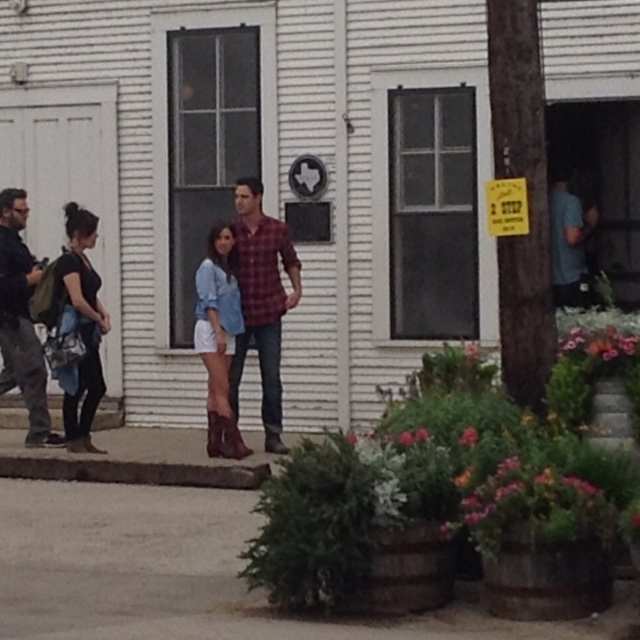 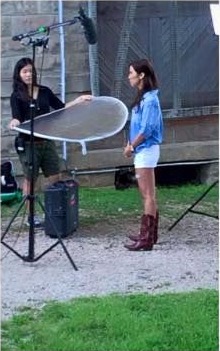 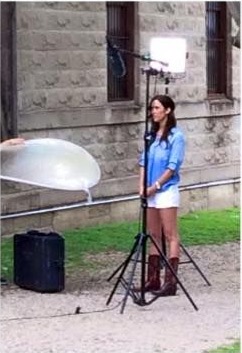 And finally, the best part of yesterday. When people were waiting in line to get in, some girl was talking loudly about how she doesn’t read my site often, but she did recently and realized they were coming to San Antonio. Producers heard her mention “Reality Steve,” turned around, took her out of line, and she wasn’t allowed in. Bahahahahahahahahahahahahahahahahaha. Nice one. Soooo yeah, future note to all people who attend “Bachelor/ette” tapings: Don’t ever mention my name. You will be escorted off the premises like you just said “bomb” at the airport. How pathetic.

-Nell Kalter’s RHOBH recap is up now for your enjoyment. I don’t watch it, but I read a review of Brandi being made fun of for having a paparazzi picture of her with her tampon string hanging out, to which she retorted back, “At least I still get my period, bitch!” Ummmm, good comeback? What a trainwreck.

-Only about 30 years too late. Are you kidding me? This is really happening? McDonald’s has announced they will try an all day breakfast menu in certain locations. With that certain location being San Diego. Exactly what is the point of this one city roll out? Everyone in freakin’ America wants McDonald’s to run breakfast all day. We’ve wanted that for decades. Do the right thing Mickey D’s. Jack in the Box is already doing this, and you don’t need to be losing to Jack in the Crap in anything.

-Since I started “Daily Links” a couple weeks ago, I don’t think anyone has appeared in this column more than Hilary Duff has. If you would’ve given me 100 names before I started saying who would appear the most, she would’ve been my 749th guess. But alas, here we are. She wore a red dress with a plunging neckline to the premiere of her new show. That is all. And seriously, ditch the blue hair. You look stupid.

-Zach Galifianakis and Kristen Wiig are in a movie called “Masterminds” and the trailer was just released. I had no idea this movie was apparently based on a true story of the biggest US bank robbery in history. No clue. But you put those two in a movie and good chance it’ll be funny. Then again, I also thought if you put Will Ferrell and Kevin Hart together the movie couldn’t fail, and “Get Hard” wasn’t very funny at all.

-Of all the stories today, I seriously thought this one was an April Fool’s Joke. When I clicked on it, I just immediately scrolled down to the last sentence to see if there was a retraction telling us it was a joke, but there wasn’t. So do with this what you will. January Jones is dating Will Forte. Has January still not revealed which director knocked her up a few years ago and became the father of her baby?

-Paparazzi are everywhere, and basically if you’re a celebrity, you better look like a million bucks everywhere you go or someone will get a picture of it and you’ll be embarrassed. Larry King was caught with a wet spot on his pants during a recent night out. However, Larry is also 173 years old, so this should be a normal daily occurrence for him. Lets not rain on the man’s parade. The fact he’s even out in public walking should be congratulations enough for him.

-Stephanie Pratt is topless on the cover of a new magazine and tells us she’ll be releasing a tell-all book in the near future to talk about among other things how fake “The Hills” was, her relationship with Spencer and Heidi, and her drug addiction. Can’t wait. I don’t read many books, but it’s smut like this that holds my interest. Can I pre-order it Stephanie?

-Haven’t heard from Britney in a while. Well, since last week when she was on the cover of “People.” Well anyway, she’s sharing her playlist with us so we all know what she listens to at the gym and what not. You mean she doesn’t listen to her own sh** on a loop? I think I would if I were a musician.

-Adam Levine’s wife is rather attractive. She’s even more attractive when she’s walking the red carpet and has a wardrobe malfunction. I guess we know who went commando that night, don’t we? Poor Behati. People just talking about her because of her body. What a shame.

-Speaking of people who are only interesting because of their body, DWTS castoff Charlotte McKinney isn’t thrilled with the critique she got from Bruno Tonioli on Monday night. I mean, the guy went about as sexist as you could by saying she’ll never be confused for a Nobel Peace Prize winner in quantum physics. Which she won’t. But that’s beside the point. Probably don’t want to throw that out there, Bruno.

-Here’s a a high school photo of Snoop Dogg back when he attended Long Beach Poly. I only even mention this because Long Beach Poly brings back one of my worst high school basketball memories ever. It was my sophomore year, it was my first varsity home game, and we played Poly who was led by future UCLA great, Tyus Edney. Place was packed, and I had two of the worst turnovers at the end of the game that cost us the win. I can’t tell you what I had for dinner last week, but I could probably diagram both of the plays that I screwed up on and what happened afterwards. Don’t worry. I’ll get over it at some point.

-Giuliana Rancic is admitting that she’s really thin. Lets not beat around the bush. Yes, she is. We all know it. She has been through cancer and obviously that’s played a major role. I would just like to point out the incredible double standard when it comes to something like this. Not to get on a soapbox, but how come larger women can call a skinny girl a “skinny bitch” or tell them to “eat a sandwich” all day long and no one gets mad, but god forbid a good looking, healthy woman criticizes Melissa McCarthy and calls her a “fatty” or any other name you can think of, and the world freaks out? It happens. You know it, and I know it. Pretty sad.

-And finally, I think a lot of you know my obsession with the Muppets. If you don’t, you do now. With that said, here’s Gonzo doing the “Humpty Dance.” You’re welcome.