You may have seen this already, but if not, the first big paragraph is worth reading:

Sharleen mentions that Kaitlyn sneaking in to see Shaun was definitely not authorized by producers. This insight, coupled with the fact that we know she does end up with Shaun, makes me agree with Sharleen when she suggests that some of the “plot twists” were designed as a slap on the wrist for Kaitlyn.

Enjoyed the initial seasons…before it became about the drama more than budding romance.

I’ve not read your blog from the start, however your irreverent wit
makes it possible for me to escape into this silly show whenever I
watch it these days. I do prefer The Bachelorette to The Bachelor;
the women’s antics competing for ‘the man’ are beyond difficult to
stomach. Perhaps it’s the idealist in me, but this show seemed to
have undergone a seismic shift from Tricia’s season to what it has
become now. I sure wish they’d cast a lead who has something original
to say while getting acquainted with a potential mate. I guess that
is missing the whole point, isn’t it?

Nice work on the BIP spoilers! I have a question/theory about Kaitlyn’s season. In Sharleen’s Flare recap this week, she said there was no way production would ever allow Kaitlyn have “off-camera time” with Shawn, so she must have snuck out to see him. She theorized that production was pissed about it, which was why Chris Harrison gave her such a stern talking-to about “leveling the playing field.” Do you think they were angry at her for seeing Shawn and telling him “you’re the one”? Chris H. certainly seemed angry with her when he broke the news about hometowns. My theory is that all the soundbytes of Kaitlyn talking about what a huge mistake she made and all the guilt she feels weren’t about the Nick sex at all. They were about the “you’re the one” conversation, but production made it seem like she felt guilty for having sex to spite her for breaking the rules. What do you think? Between that transgression and the snapchat video, I doubt Kaitlyn is their favorite person right now!

Kaitlyn says Ben H should be bachelor and he’s still on show, she continues to spoil her season herself.

I love you, and I love blind items. Any truth to this? Or is she already off your radar?

Hey Steve, let your reader know that the font she was looking for (from the group date card in UnReal) is most likely Dear Joe 6 and it’s a free download. I’m a graphic designer (and font nerd, obviously). 🙂

I attached the email below so you can remember what I am talking about. Also a picture of the letter. 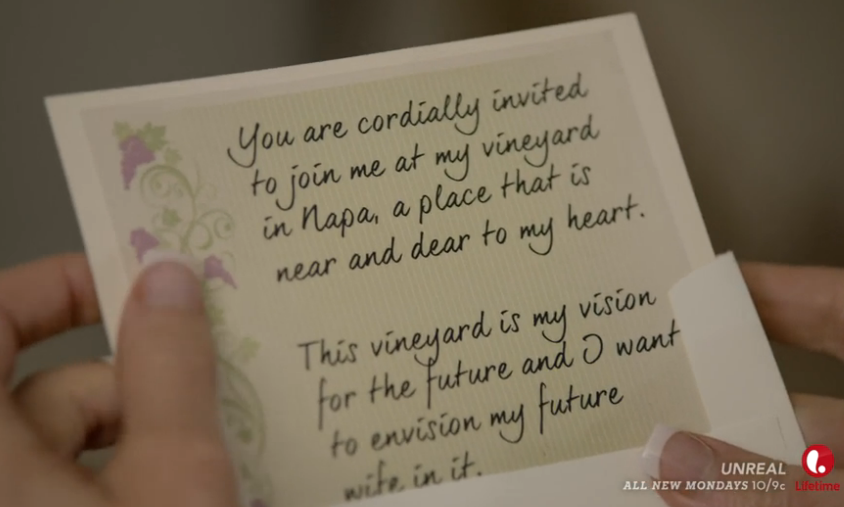 Long time reader, second time emailer. In the Dublin rose ceremony cocktail party Ben H. accuses Kaitlyn of telling Shawn that she is going to pick him. From that conversation, I got the impression that the “alone time” in San Antonio that Shawn keeps bragging about actually wasn’t “alone time” and in fact Ben H. was in the room the whole time because maybe he and Shawn shared a room at the time. I think this because Ben H. says something along the lines of “you visited the guys in San Antonio off camera, and so we were hanging out, then the morning finally rolled around and I hopped in the shower and when I came back the vibe was different between you and Shawn because I think you gave him too much reassurance” (obviously the producers planted the idea in Ben H.’s head that “something happened” while he was in the shower). Do you think it’s possible that Shawn’s “alone time” was actually shared with Ben H.?

If this is the case, I would think it makes it less likely that Shawn and Kaitlyn had sex before the fantasy suite.

OK, I am a new fan of yours and actually read your column and have been kind of ignoring the Bachelorette, as it’s really bad this year. I keep reading how viewership is up and can’t figure out why as the Bachelorette FB page has nothing but hate mail, very few seem to like Kaitlyn or the new format or the whole show. I’m wondering if those great ‘viewer’ figures might be pumped up to get people to watch because no one seems to like her or the show anymore. I know you think it’s great to have change, but it seems like the quality of the bachelors and bachelorettes are changing. It’s beginning to be more like a Jerry Springer Show. I realize it’s all fake and probably no intentions of marriage, but we still like to hope for a couple to hook up for real, that’s why we watch the show. Now it seems like it’s more of a game to see how they can shock the public.

My question is, of the many many choices, why did the producers pick Kaitlyn? Not too many people liked her even from the bachelor, just read all the reviews even on the promo pages for Bachelorette. She does not seem to have the quality or background of a woman with class. No job we know of, acts very immature, and not all that good looking from many peoples’ perspective. And it sounds like she is more interested in sex than finding a mate. I know the show is fake, but so are a lot of movies we go to see, but we all like happy endings and there is always hope that just one might have wedding bells…… and there is no way Kaitlyn will get married to one of these men.

Thank you for your spoilers, it has made this season bearable with your comments. And I now watch UnReal, thanks for letting us all know about it.

You ended the chat I wasn’t able to get it in.. Not show related at all. Was wondering Olivia was wearing a Ducks jersey does she play hockey too? Or only her brother? Do you play? Are you a hockey fan?

Are you happy with the NBA drafts and trades so far? Thoughts?

As an animal lover my heart goes ahhhh when maddie looks up at you..she justs wants to be picked up so she can sit on your lap…..she loves her steve sooo much…please acknowledge her more…her eyes are pleading!!!! Hehehe p.s. Hey doesn’t your sister have a fan you could use in the back room or doesn’t she like you???8…????

Comment: Actually Maddie doesn’t want to be picked up. I can never hold her for more than a few seconds before she immediately wants to be put down. That live chat is the weirdest thing. I’m in front of my computer a lot. Pretty much all day. When I’m typing all day, Maddie is never next to me. Ever. She’s always on the bed in the room. But come Thursday night, when I sit down to prepare for that show, the second she hears me talking to the computer, she comes running in. It’s the weirdest thing. Like she knows I’m doing some live show that she wants to show up on. That thing she does on Thursday’s where her paws are on my leg and she wants to be acknowledged? The only time she does that all week is every Thursday night between 8-9 CST. She NEVER does it any other time. Bizarre.

Anyway, I’m sitting at a coffee shop working on a Grad School paper, and overhear a woman talking about her recent trip to Ireland. She tells her coffee date how she and her travel friend initially missed a bus to the Blarney Store, but just HAD to get there. So they rent a car, and in their excitement to go, accidentally HIT a car on their way there. Thanks to my new-found knowledge from your column regarding Irish teens and their potty habits, it took everything in my not to yell “you HIT a car to kiss a piss covered stone?!!?!?!”

Thanks for the laughs, Steve. You make Tuesday – Thursday entertaining.

Comment: Have Kaitlyn and Jared had their lips inspected for any fungus growing on them since their trip to the Blarney Stone? If not, they should.