RS, huge fan. I’ve agreed with you on everything, but I have to say that I find Kaitlyn’s conduct reprehensible re Nick.

First, I believe Nick hit Andi below the belt at the AFTR because she was so cold to him after leading him to believe he was the one. I think Nick likes the limelight, but is genuinely a sensitive guy. She had sex with him and then dropped him with no explanations and acted very cold to him. I think he was hurt and desperate.

Re kaitlyn, sure they had sex on their first date, but to his credit, they had known each other for a while before the show. He, and even she, felt like they had started a relationship before the show started, so it’s a bit different.

Nick has not tried to milk his role in the Bachelor series. After Andi, he went back to his life and reached out to Kaitlyn privately. He’s not some bartender or wannabe actor. I just think he gets a lot of criticism unjustifiably. He seems passionate and a bit caught up in the moments, but comes off as being far more intelligent and reasonable than these other boneheads. Also, when he hangs with Kaitlyn, they actually have substantive conversations, rather than surface level small talk and make outs.

As for Kaitlyn, I could care less that she had sex w Nick – after all, they seem to have great chemistry and truly to have started something pre show. No judgment. But, what’s awful is her response to it. She keeps talking about how she feels bad for having sex w Nick because it’s hurting the other guys. What? She needs to take some accountability. How selfish is that? How does that make Nick feel- thanks for the sex but don’t talk about it because I’m still trying to be in a relationship w other guys. The fact is that for some people, sex means something. I think it does for Nick, but this makes me feel like it doesn’t for Kaitlyn. If the lead were a male and roles reversed, he would be crucified as being a sexist if he had sex w a girl and then talked about feeling bad because he wanted relationships w other women.

Lastly, I dont mind her making out w guys either, but why make out w them if you are sending them home? She knew she was going to boot Ben Z, but made out with him before the rose ceremony….wtf! Why do that? If I were booting a guy and had “relationships” with at least 5 other guys, I definitely wouldn’t be making out w him. It’s fine to make sure there’s chemistry, but this crosses into just gratuitous, counterintuitive behavior.

I read a column by a woman who thinks kaitlyn has borderline personality disorder. I’ve encountered this as an attorney w certain “victims”. Thoughts about Kaitlyn’s behaviors?

Comment: Everyone is entitled to their opinion of course, but I pretty much disagree with everything you said. My reaction to that is I think you take the show too seriously. Really? Would you rather see a lead only make out with one or two guys? How boring would that be? Kaitlyn isn’t the only one who’s done it and she isn’t the last.

OMG! Olivia was so completely adorable on the live chat last week, especially when someone asked her about a movie she’d seen. She immediately said she’d give it 4 stars.

This gave me the idea that she should do movie reviews each time she’s on your chat. She could review 1 or 2 movies and say what the movie was, what she liked about it, what she thought could have made the movie better (if anything), then rate it by the number of stars she thinks it should have.

I think this would be very well received.

Keep doing what you are doing!

I’ve never emailed you before but I saw this comment on Instagram and had to laugh! Apparently you need to be fired. 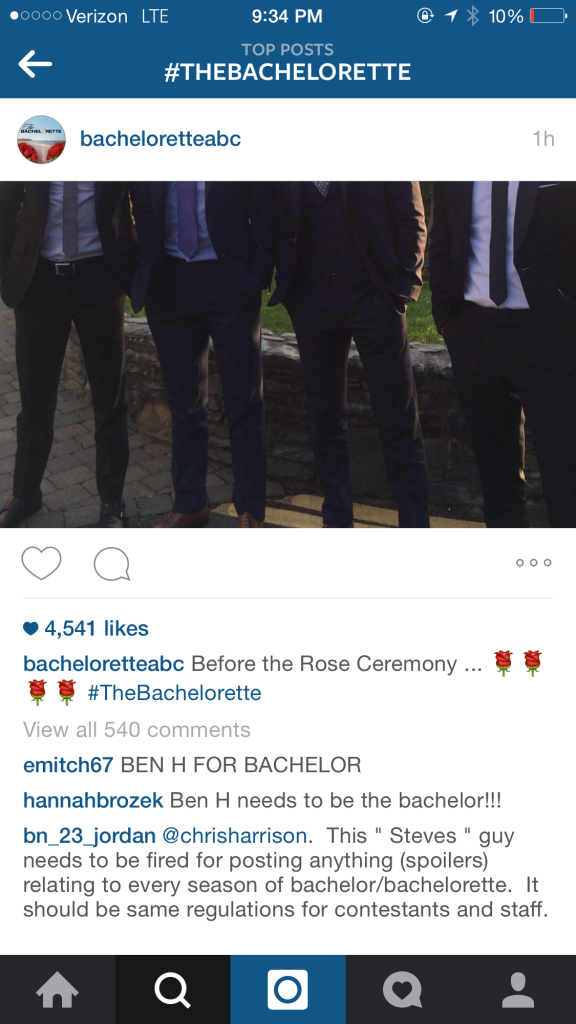 sorry for the randomness of this but do you have any idea whatever happened to Nicki Sterling? She just seemed to drop off the face of the Earth. Did she find a nice guy to remarry?

Shawn’s humiliation last night was really painful to watch. And the whole thing is enabled because Kaitlyn knows she has him by the privates. Her process was ruthless and methodical:

1. Begin aggressively: Tell Shawn that you were wrong to say he was “the one”. Translation: I know that was incredibly important and meaningful for you, but remember I own that, and I’m taking it back.

2. Tell him that you banged his chief rival after telling him he was the one!!! Translation: I do whatever the hell I want. If you don’t like it, there’s the door. If you get in line and cooperate, there’s potential sexy time waiting for you in the end.

3. Act like you feel guilty about it, because that gives him a chance to be a noble guy who doesn’t want to see you hurt.

4. Once he bites on that, remind him that there are other guys in the house that you want to “explore”, and that he has to let you do that. Translation: Never forget who the boss is, ‘cause you can get fired.

5. Go out to that rose ceremony and give another rose to the guy you banged, right in front of Shawn. Translation: live with it homey, I do what the hell I want, and it’s gonna be like that when we leave the show, too.

Kaitlyn’s snapchat of Shawn fits in perfectly with how we saw her completely cut his nuts off last night. He lays down where she tells him to, she takes the pic, she distributes the pic, in her time and for her purposes.

I’m far from being a fan of Nick’s, but it’s pretty obvious why she chose Shawn—he was the one she knew she could control. I realize that more women than men probably watch this show, but every guy watching it wishes we could sit down with Shawn over beers and talk some sense into that guy.

Was happy to find out UnReal got renewed for Season 2. Good news on that front.

The ending of this week’s episode on UnReal was a WTF moment. I have no idea what’s coming up next but I am looking forward to finding out. I can’t thank you enough for the suggestion. I must mention I haven’t given Friday Night Lights a look in yet, but will do so soon.

Keep doing what you do

Comment: I thought Mary plunging to her death was a bit extreme. Just seemed like they didn’t need to go there. Maybe the threat of it, sure. But to actually do it and now they have a dead contestant who killed themselves from the pressure of the show? Whoa. A bit excessive if you ask me.

I guess this point is sort of moot at this juncture now that Shawn knows anyway, but I often wonder why producers choose to keep some information private when it’s the perfect opportunity to create drama, which is obviously their main objective. Take Kaitlyn sleeping with Nick for example — don’t you think it would have resulted in a much bigger blow up if a producer had planted a seed for Shawn to find out from someone other than Kaitlyn? Combine his shock with the betrayal of her keeping a secret and it would have been the perfect recipe for an emotional meltdown. Or like when Courtney jumped in the water with Ben or the Claire and Juan Pablo thing, I don’t really understand why producers didn’t take those opportunities to spill the beans to the other guys/girls to create a blowup of drama and tears. Many of those events didn’t come to light to the other contestants until the ATFR … any thoughts on this?

Question: Several episodes ago on “UnReal” the “host” was seen talking out the window. Then it panned and showed him thanking a contestant for the sex and moving on. Since this show is based loosely on today’s reality shows, was this to represent Chris Harrison and if so, do you know who it might have been? Is there a history of Harrison and the contestants?

Hi Steve – I have to believe that at least 95% of the contestants that apply for the bachelor/bachelorette are aware of your site. That being said, they are all now privy to UnReal and how it works. I can’t imagine knowing the manipulation that goes along with this process that new contestants will fall for it as easily in future episodes the way Shawn has. What are your thoughts going forward?

I guess the promo they showed at the beginning of the season of a naked man running away is just another promo never to be explained by the show. But do you know what was going on there? Nope.

I didn’t watch Andie’s season. (But still read your spoilers). So I didn’t ever see Nick on that season. Besides the other guys just being jealous I don’t see what is wrong with him. Am I missing something? Impossible to explain that to you if you never watched Andi’s season.

I know looks are subjective. But Shawn is not attractive. And heaven forbid they ever have a daughter and she gets that nose.

Hi Steve, no questions about the Bachelorette now but I have one about Unreal. For some sick reason I’m not sure of, I really enjoy this show. Maybe b/c people now will believe what you’ve been saying for years about this franchise. My question: on the episode last night when Mary had the “family date” and they showed her true bi-polar self, do u think the producers would go so far as that one did in switching her medication? It seems really far fetched and very unethical. If they did and the contestants found out could they sue? For some reason this episode really bothered me and pissed me off to think that the show would stoop so low as to tinker with someone’s health. Your thoughts? Thanks for the spoilers this season. As always, you never disappoint. B—

Comment: I don’t think they’d switch out someone’s medication – no. Would they withhold it? Possibly.