Being only a week away from the finale, gossip sites have to get their last stories in before the big final reveal, and as is the case every season, they’re back to misreporting and giving you fake headlines so you’ll click on their sites. The rumor that’s been going around for at least the last couple weeks based on the emails I’ve been getting is that Kaitlyn and Shawn have broken up, and that Shawn is jealous watching all this stuff play out with Nick, and he and Kaitlyn argue all the time, blah blah blah. Here to tell you don’t believe a word of it. It isn’t true. Shawn and Kaitlyn are together, they’re engaged, and they have been since the final rose ceremony. I know I sound like a broken record, but this is what gossip sites do. No gossip magazine or site will ever in the history of ever print a headline that says, “Shawn and Kaitlyn Doing Great! Everything’s Perfect!” They HAVE to come up with something that will pique the readers interest, and it’s much more of a headline grabber to go with something negative. So yeah, nothing’s changed, they’re together, from all accounts they are giddy in love with each other, and that’s that.

Hey, look at Brady throwing a little personality at us. Did you see his Instagram post from yesterday? Pretty funny stuff. Who knew? He just earned 1 billion bonus points with me. Shows me he doesn’t take himself too seriously and isn’t driving around listening to Cranberries songs over a breakup like someone else we know. Kudos to Brady. He made a funny.

I watched Afterbuzz the other day and Brooks commented that the flights/transportation arrangements for the families weren’t covered by the show/ABC that his family had to make their own way to location of his hometown. They mentioned Andi saying similar on her tweet. Do you know anything about this or if this for all? And that’s a cheap of them to do that. It’s not convenient for everyone and costly if you have a large family.

So many of your readers are feeling some pretty strong rage against Shawn these days. As one who tends to get irritated with insecure, jealous, angry men, I would typically tend to agree with them. But in this situation, I just feel sorry for Shawn.

He was pretty confident that Kaitlyn would choose him in the end. Then she brings in someone with whom she has a history of sorts. And week-after-week, she keeps him around. I challenge any person to not feel upset by that slight. Then tag on the fact that Nick is a). arrogant and b). extremely intelligent when it comes to reading and manipulating people, and it’s got to be infuriating. Shawn is insecure, and Nick–with the help of producers, I imagine–is playing him like a ukulele. Just as Shawn met Nick at his room after his overnight, Nick did the same. Clearly this was staged by production. And Nick stood there acting innocent and “mature,” while Shawn lost his cool.

Plainly put, Nick is the sneaky older sister who persistently pokes her little brother while staring blankly out the car window and pretending she’s doing nothing wrong. And Shawn is becoming enraged at the fact that his mama is oblivious to it all.

In both of his Bachelorette seasons, Nick responds to difficult questions by sucking on various parts of the woman’s body. Both women praise “the passion” they feel with him. Because he can press them up against a wall or tree and feel them up? Foreplay is his M.O.

Consider that Nick, still claiming to be in love with Andi, threw her under the bus with the “making love” comment. I tend to believe it was a calculated attempt to cause conflict between Andi and Josh.

After having sex with Kaitlyn, he smoothly relays just enough info to the other men to make them question what happened, but not enough to get him in trouble with Kaitlyn (or all of America).

After pushing Shawn’s buttons and getting the desired response, and eyebrow lifts in amusement. “Are you threatening me?” He got exactly what he wanted out of that.

Even with his family, they are fiercely protective of him while he disregards their concern and ultimately does whatever the hell he wants.

And his coffee Tweet? Really? Was it actually about the coffee or about his clearly posed half-nekked plea to be the newly buff Bachelor Skeezewad.

Bottom line, he’s smart. (Not in a sexy, intellectual way so much as a sneaky, slimy, bottom-feeding kind of way.) He’s working Shawn. He’s working Kaitlyn. And with the help of the producers, he’s working America.

My favorite part of Monday’s episode was the awkward end of the rose ceremony. Shawn downs his drink and puts it down on the silver tray. Nick waits for Shawn to move away from the tray before silently walking to the tray and silently putting his glass down. I suspect we’re supposed to admire his cultured control and calmness. But check out his detour as he attempts to keep 20 feet of rug between him and Shawn. Hilarious!

Thanks for helping me get through this season. Perhaps the most contrived yet, and I am missing the cheesy poetry and other awkward romantic gestures. Apparently it’s Nick v Shawn and sex sex sex this season, big yawn fest.

So, here is my question. I know the show puts up for safe house visits while the season is airing. What happens for the long distance lovebirds after the season ends (assuming they are not yet broken up, ha ha)? Does the show continue to fund their meet ups, or do they have to pay their own way? I’m sure they could coast a bit on the PR tour, but…

Don’t worry, 40 isn’t so bad. Might want to keep your lower back toned up, though. 😉

so I guess my main question is about how much say the lead has in who they get to keep around for the next show. If Kaitlyn wasn’t into Nick, why keep him so long? Is it for her to save face? Or were the producers in her ear, saying how funny it would be for Nick to be in the final 2 twice and not “win” twice or to keep the drama between Shawn and Nick? What are your thoughts? From what you’ve heard, how often do the producers talk the lead into keeping someone just for the drama/ good TV (for example Tierra, Jenna etc.)?

Thanks for your answer, I really enjoy your site and I’m glad you were able to fix the spoiler in time.

So I watched a couple of episodes of Unreal and one thing struck me. The Chet character looks like the love child of Mike Fleiss and Elan Gale. And acts like a total douche. From what I have read, Fleiss appears to be kind of a jerk as well. Do you think they had him (or them) in mind when they cast that part? Absolutely.

Also, Elan Gale has responded so nastily to some posts about Kaitlyn on his instagram page. Way, Way out proportion to the comment made. Seems like a very angry person. What is his role with the Bachelor enterprise? I know he is a producer, but what level? Any insight or stories about this guy?

I’m sure other people have emailed you this, but pronouncing aunt ‘ont’ is very common in New England. A little less so in CT where Shawn is from, but no one born and raised in the state of MA, for example, says anything but ont.

I know you don’t care about Jake Pavelka (neither do I really!) but I did get a chuckle out of him popping up on the online dating app Bumble. I did “swipe right” on him just out of curiosity to see if we matched, but unfortunately I must not be as hot as Vienna ????. Anyway, here are few screen grabs of the pictures he has posted. I did think it was interesting it says he works in real estate now? I thought people still saw him working as a pilot. Pretty sad….he could not look any worse than he does in these pictures! 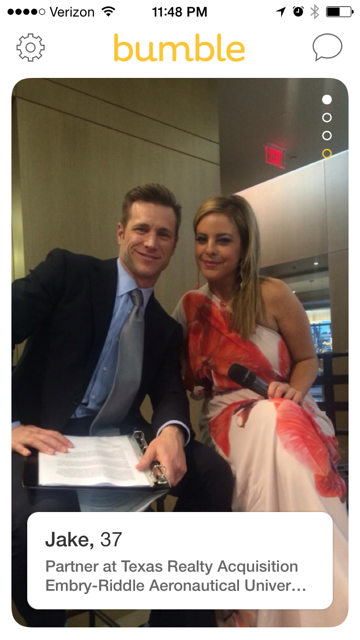 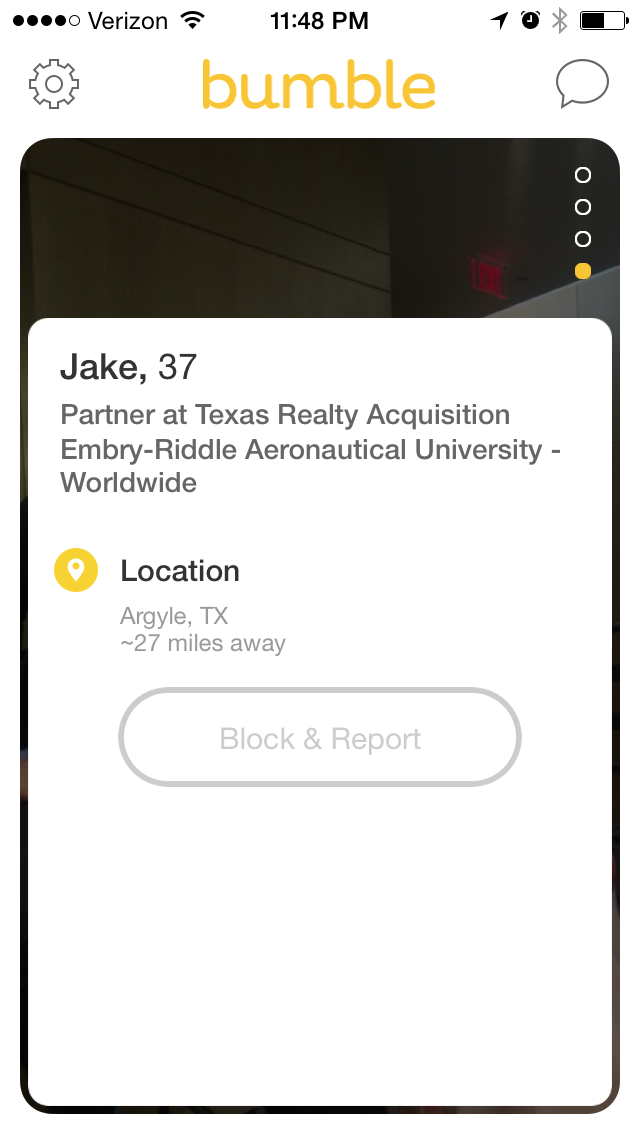 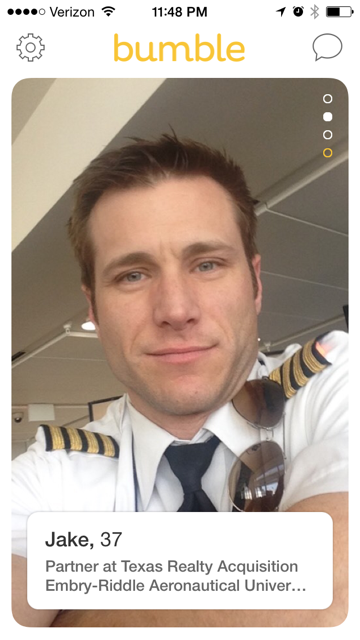 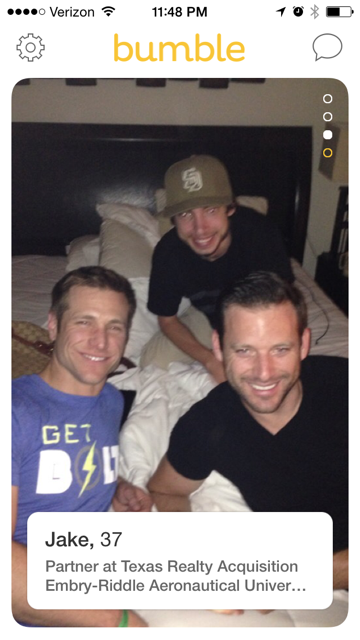 What country singer is Shawn’s “Eskimo brother”? I don’t know.

I find it kind of funny and ironic that Nick is calling Shawn out for that, when Kaitlyn is essentially doing the same thing. He’s having sex with a girl who he knows is having sex with Shawn….and possibly Ben H.

Okay, that was super cheesy. Hope it at least made you smile.

Thank you for the constant updates. They are so entertaining! A few questions:

1) I felt like last season of bachelor in paradise was so incomplete without the tell all episode, probably because im so used to that format. Do you think they will have one this season and why do you think there wasn’t one last time? I guess this season’s after-show will be their “Tell All,” except we’ll get it every week and want to shoot ourselves afterwards.

2) Do you think the producers and the network have some seasons in mind that they kinda just would like to sweep under the rug and pretend didn’t happen? Like JP’s season? Or even Ben Flajnik’s? I feel like no one ever mentions his? Are they embarrassed by them? Prince Lorenzo, Travis, and Ben are three that come to mind. And yeah, probably JP even though that gave them good ratings.

On a side note, i just wanted to point out that on one of tenley’s periscopes that she did with ashley i, jade stopped by and one of the first things she says is “tanner says hi,” clearly not knowing fans were watching live. I just think its so humorous that these people kinda spill it for us!

Comment: Yeah, it is kinda funny how inevitably social media will somehow spoil every season.