A correction from yesterday’s post. I had said that filming was in Vegas for a date, but that everyone was still in LA. That’s wrong. As I tweeted yesterday, filming has moved to Las Vegas for ALL of episode 4, with Ben’s first 1-on-1 date yesterday. It was filmed at Aria Resort & Casino and they were seen shooting scenes in the High Limit Lounge pretending like they were gambling. Also, they took a helicopter ride to the Valley of Fire State Park, then came back and eventually ended the night with a fireworks show. The fireworks were shot off from Aria but Ben and his date were watching from MGM Grand. What’s funny is this show had a run where it seemed like every season they were doing something in Vegas. Do you realize they haven’t been to Vegas on this show since Brad’s season? And “Bachelor Pad 1” had dates there as well. So it’s definitely been a while. So the picture posted yesterday of Olivia and a couple other girls was just them arriving. Sunday was a travel day, and yesterday started the dates in Vegas.

What’s funny is the firework show kinda pissed some people off who were staying at the hotel. Read a couple of the comments on these Instagram pics from last night. I’m sure they would’ve been even more livid if they knew the firework show was for a silly reality TV show… 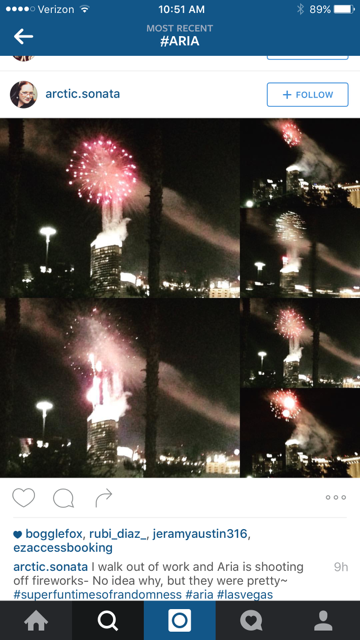 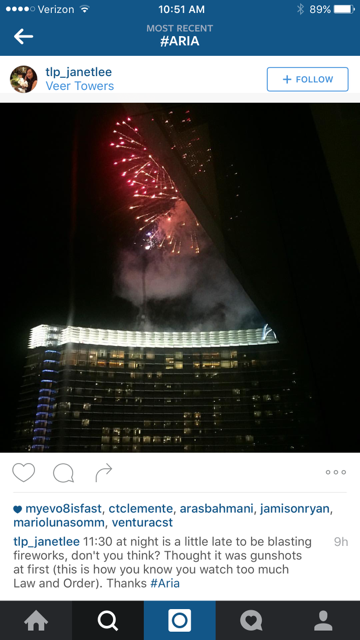 Still amazed that there weren’t any pictures of Ben and his date roaming the Aria casino yesterday, but that’s ok because I found out who it was with. It’s someone I haven’t released yet. I have a feeling we’re getting closer to more stuff getting spoiled on social media in the coming weeks. There’s basically been nothing at this point, which is rare, but not as uncommon as you may think. If more stuff starts getting out on social media, then I’ll release more girls. With that said, I can tell you that yes, Becca is still there. But no, he’s not going to pick her in the end. I expect her to be going home fairly soon. On to your “Daily Links”…

-Nell Kalter has your RHOC recap up now for your viewing. I’m amazed that this season is still on. Just keeps going forever, and doesn’t it suffer from the same thing that KUWTK does? Where we already see the storylines ahead of time in the gossip rags, then by the time the episodes air we already know what happened. I’ve never seen 5 minutes of the show but all I keep seeing about RHOC is one of the womens’ husband may or may not have cancer. I could’ve sworn I read that like 3 months ago.

-Here’s your behind the scenes info on all things DWTS last night. And it was just announced this morning that Maks is coming back next week as a guest judge. You know who’s been the best guest judge (that wasn’t a former pro) on the show? Alfonso. Most guest judges just kiss ass and don’t want to upset anyone. Alfonso wasn’t a jerk, but he didn’t mince words either if he knew someone needed improvement. That’s what I want to see from my guest judges.

-Remember how last week I brought up the Taylor Swift curse on Major League Baseball, where teams stadiums she performed in started sucking the second she was done. Well, she did in the Nationals and Padres, but Houston ended up barely making the playoffs. With the playoffs set to begin tonight, we may have a new victim: Toronto. She performed in Toronto this past weekend, and wouldn’t you know it, the Blow Jays open their playoff series at home this Thursday against the Rangers. They are also 2/1 favorites to win that series. Uh oh. I guess we know who to blame once the Rangers win that series.

-Speaking of T Swift, did you see the SNL Parody skit they did over the weekend talking about her squad? Good stuff. Pretty much exactly what I picture the world to look like if you’re not on her squad. How do I become a member? Can I pay someone? Do I have to fill out an application? Whatever I have to do, count me in.

-As if hearing your ex-girlfriend committed suicide wasn’t bad enough, now comes word that Jim Carrey’s ex, Cathriona White, had four prescription pill bottles with her at the time of her death, none of which were made out to her, but under an alias used by Jim. Wonderful. Why do I have a feeling this story is going to get worse before it gets better?

-Tiffani Thiessen has some designer baby clothes out now that her kid modeled. That’s great and all, but lets get to the real issue here. Stop denying your past. Quit removing the Amber from your name. I know you did this years ago, but it’s unbecoming of you. Your name is Tiffani Amber Thiessen. Always has been, always will be. You once dated Zack Morris. Then you moved zip codes and slept with everyone in the 90210 area code before moving back to Buffalo. Deal with it.

-With “Home Alone” having their 25th anniversary and getting re-released this Christmas, a mini controversy has popped up. Somebody is bothered by a plot hole they can’t seem to shake. Ummm, this is the movies. I think throughout the years and years of cinema, you could find a plot hole in basically every single movie ever made. Why people are spending time on phone lines from this movie is beyond me. THAT’S the plot hole from this movie that bothers you? I can think of about 100 others more ridiculous than that, but hey, whatever toots your horn.

-I really don’t care all that much about Miles Teller & Keleigh Sperry. Hell, I didn’t even know that was his girlfriend until I read this story. I just think their names are funny. Keleigh Sperry basically sounds like a knockoff Katy Perry. Like, if someone were to make a parody video of Katy Perry, but didn’t want to call themselves that, they’d go by Keleigh Sperry.

-I’m sure you saw last night on DWTS, but Allison Holker announced she was pregnant, and will continue dancing with Andy Grammer this season. Come to find out she’s 5 months pregnant. Yikes. Obviously this has been cleared by her doctors, but man, if they get to the finals, she’ll be dancing at six months pregnant. Who am I kidding? No need to worry Allison. You guys aren’t getting to the finals. Although if “Vote for the Worst” was still around, maybe you would because I’m guessing they’d want to see a six month pregnant woman dancing around on this show. 21 seasons of this show and this is the first time anyone has been pregnant while dancing – that we know of at least. Surprised it hasn’t happened more.

-Clare Danes was on Howard Stern’s show and talked about how her ex, Billy Crudup, left his then pregnant girlfriend Mary Louise Parker, to jump in bed with her. Man, some things I never recall. I guess it was good that Clare did this before the advent of social media, or else she would’ve gotten destroyed. And what a shocker, Clare and Billy didn’t end up working out. Ladies, if you ever are dating/hookin up with a guy who’s cheating on his girlfriend with you, then he leaves that girlfriend for you, why do you continuously believe he wouldn’t do that same exact thing to you? Makes zero sense on the logic scale.

-Kylie Jenner posted a picture of her in spanx yesterday, and the internet just about had a heart attack. So much so that she had to clarify that her spanx had butt pads in them, like we couldn’t tell. Isn’t spanx essentially false advertising for men? I guess women feel comfortable wearing them since they are pretty popular, but hey, you ain’t foolin’ us.

-More game show mayhem. Well, not all that much craziness but this Jeopardy! contestant is just all that kinda creepy. Who told him to smile this way when the camera was on him? Is this a bit? Or is he just that uncomfortable on camera? Part of me thinks this is genius if it was pre-planned, but if it wasn’t, part of me thinks this guy might be driving a van around with candy in the back.

-The old Nancy Drew books look like they might be coming to television. Outstanding. What’s next, the Hardy Boys? Encyclopedia Brown getting his own network show? Maybe they should just go all the way and give “Choose Your Own Adventures” an order to go straight to series. Are people really clamoring to see Nancy Drew books come to television life? My guess is no, and this is just unoriginal Hollywood doing what it does best.

-Now this is some 80’s news I can get behind. Will Smith has gone back in the studio and is going to tour again with DJ Jazzy Jeff. I basically listened to a lot of rap from 6th grade throughout college, and “Parents Just Don’t Understand” might’ve been one of the first rap songs I can remember. Almost 30 years later and I still know every lyric to that song. I think most people do.

-Another former “Laguna Beach” cast member got married over the weekend. Remember Taylor Cole from season 2? I definitely remember her and what she looked like, but don’t remember all the details of her storyline. Well anyway, a couple of her Laguna friends were in her wedding which goes to show, the lower end of the totem pole cast members all stuck together, while the elite ignore them like the plague. Good times.

-And finally, this. Just this. A day I’ve looked forward to for only 35 years probably. Lets all celebrate and rejoice.