Not one hour after I posted the link yesterday to the woman on Facebook who had taken video of the group date at the Mirage on Tuesday, she had taken the video down and deleted her tweet. I contacted her asking why, to which she hasn’t responded. The only reason why she’d do that that I can think of, is because producers saw it and requested that she remove it. Granted, she’s a regular citizen visiting Las Vegas who happened to stumble upon the “Bachelor” filming, so she has every right to take it and post it. So I have no idea why she removed it, but it’s gone now. Oh well. You briefly were able to see some of the girls on the date at least, and once the episode-by-episode spoilers come out, you’ll know who everyone was. As for yesterday, well, I’ve got an exclusive for you. These pictures aren’t anywhere on Twitter on Instagram, so any sites that are most likely going to claim this spoiler as their own and run these pictures, please give credit back to where you got them. Not much to ask.

Yesterday morning I told you there was going to be a “wedding” themed 1-on-1 date. Well, lookie who got it… 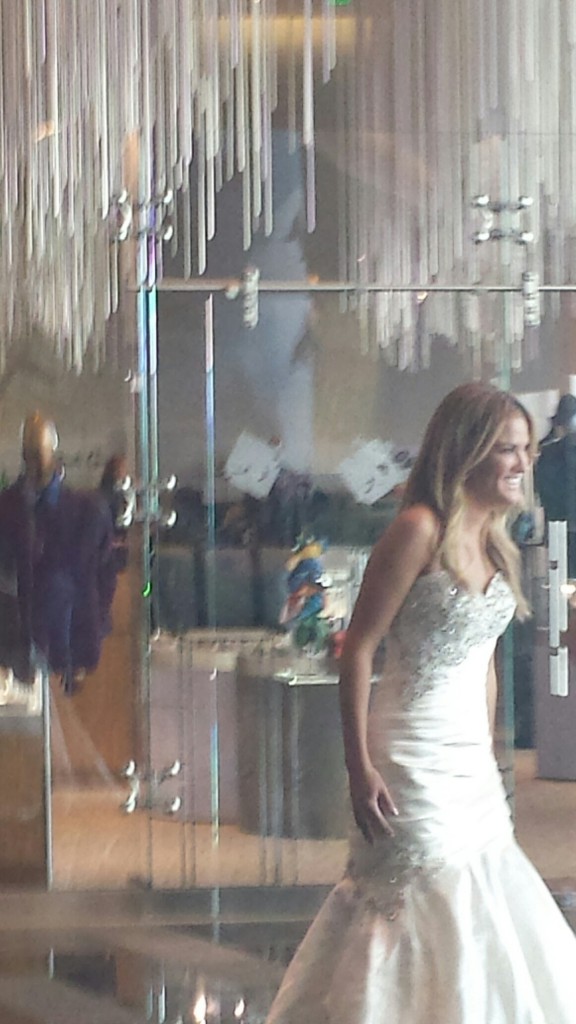 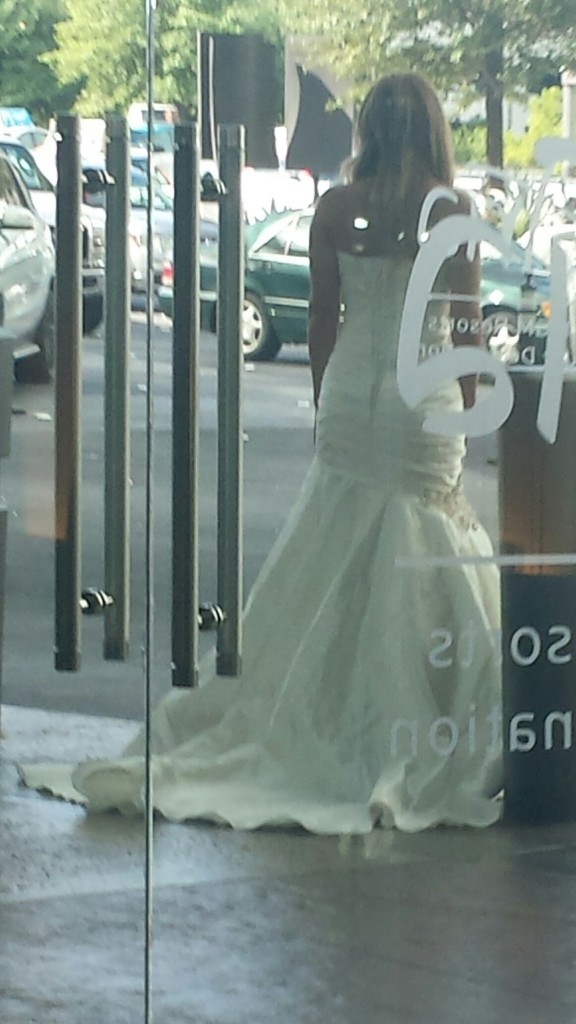 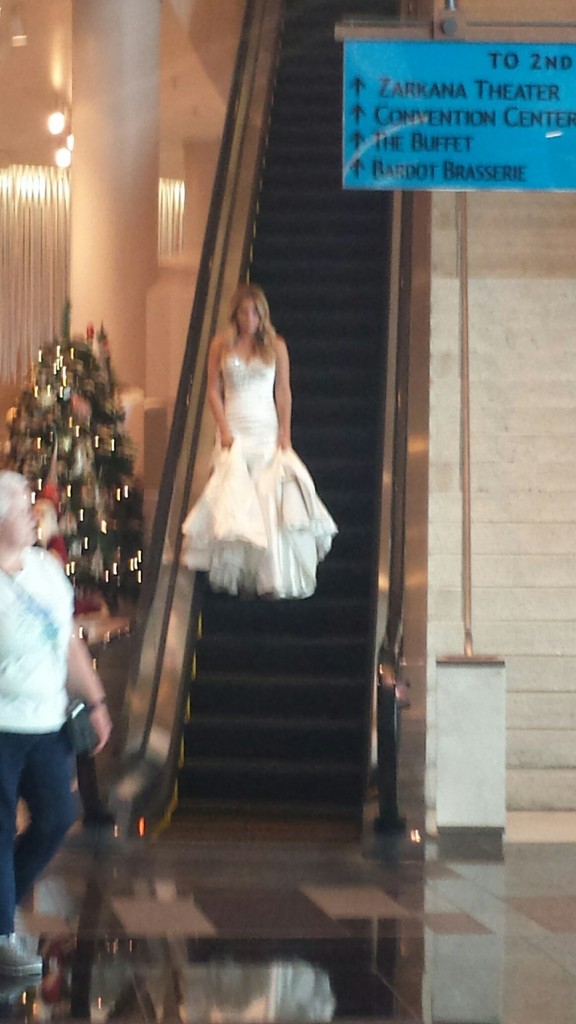 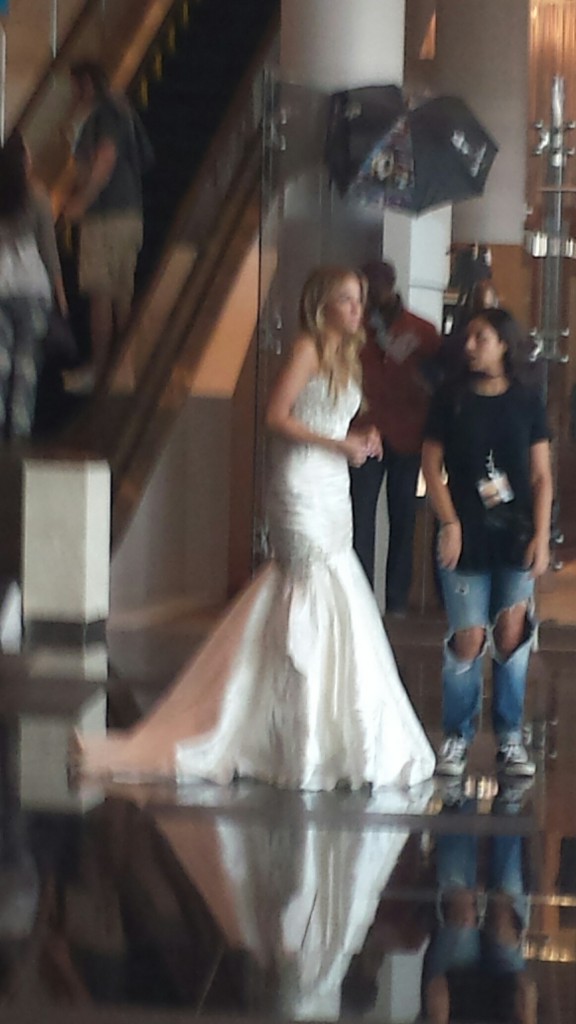 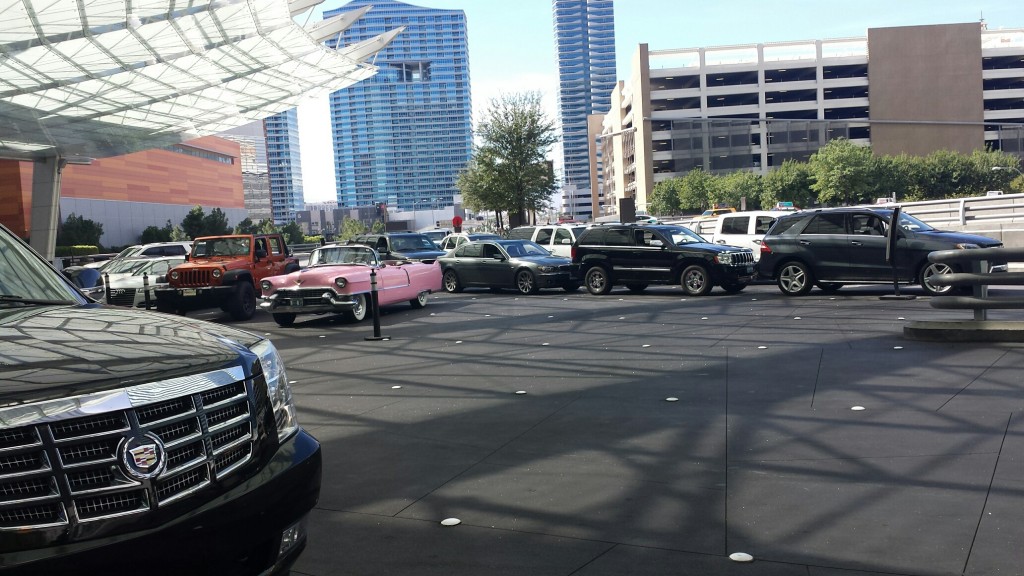 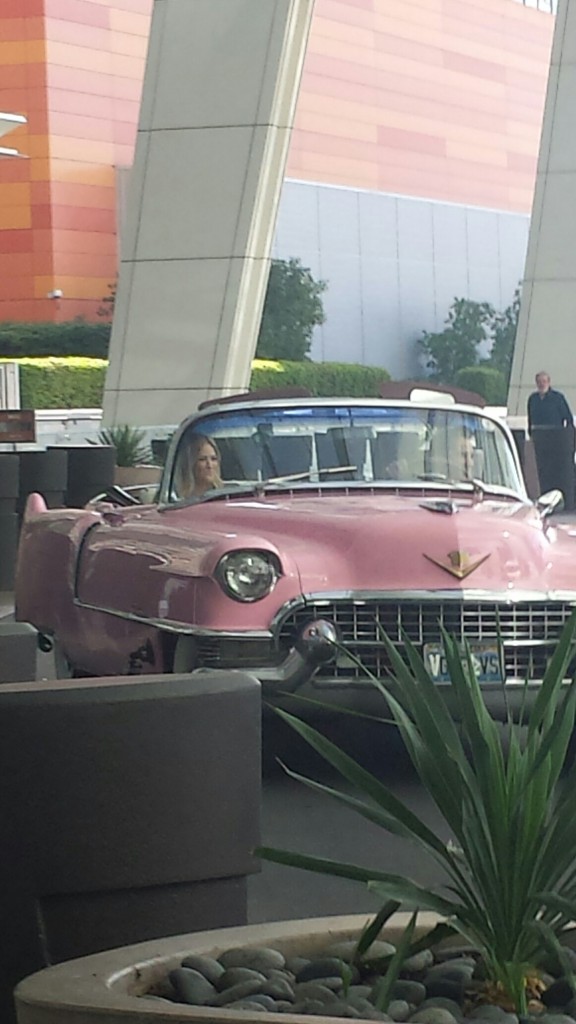 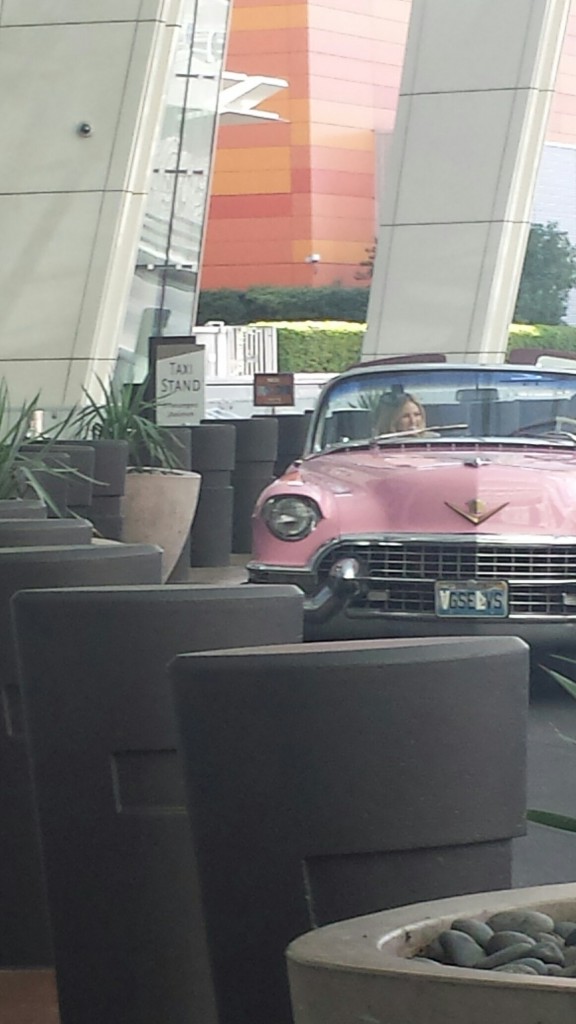 In case you aren’t a fan of the show or have poor eyesight, that’s Becca. Ben actually didn’t pick her up. This is just her leaving the Aria Resort and Casino, getting into a pink Cadillac, and driving off to wherever she was meeting Ben. Not a whole hell of a lot you can do on a 1-on-1 date in a wedding dress, so I’m just guessing it was probably some photo shoot or something like that. The cocktail party and rose ceremony tonight is at Liquid, which is the pool/lounge at Aria. I was told before the season that they would be going to Denver at some point this season. Seems logical since the last two “Bachelors” (Chris and Juan Pablo) both filmed an episode in the city they currently were living. But I never got it 100% confirmed about Denver, so I’m not sure where and when they’re going. But if they are, safe bet it would be this next episode since they’re essentially next door right now in Vegas. And since we know they’ll be in Indiana at the end of the month, I’d say odds are looking good they’re headed to Denver next. Tomorrow is a travel day, so if they are, expect pictures to start popping up on social media over the weekend. Follow my Twitter as I’ll keep you updated on where filming is if I hear/see anything. As for Becca, I still stand by what I’ve said all along this season. I don’t expect her to even reach hometown dates this season. Time will tell. On to “Daily Links…”

-Former “Bachelorette” and “Bachelor in Paradise” contestant Justin Reich, you know “Color Me Badd” hair guy, did an interview – with his son’s mother, Autumn Pippenburg. Kinda interesting to be interviewed by your ex that you have a child with. Seems like she was more weirded out by him going on the show twice than he was. I guess that’s understandable with a child that’s involved. It’s a good interview because of all the single parents who’ve been on this show, we rarely hear from the other party involved who has to stay at home with the child.

-Your Survivor recap from Bryan Fischer now up for your viewing pleasure, as is
Probst’s weekly interview with EW.com talking about the tribe swap after only 2 episodes, and how Savage and Tasha managed to flip a whole tribe around when they were outnumbered. As for Fishbach, I know he’s out of the country right now so maybe that’s why his blog isn’t up on People.com.

-Rumors are swirling now that they’re both single that Blake Shelton and Gwen Stefani are a thing. Sources have already come forward and said no chance. When it comes to Hollywood millionaires, I don’t put anything past these people. Do I think Blake and Gwen are an exclusive dating couple? No. Do I think that maybe these two have knocked it around a few times? Maybe. Those people live in a completely different world and lifestyle than the rest of us, and nothing that happens in Hollywood should shock anyone.

-Speaking of the “Voice,” Christina Aguilera is returning for season 10 in the spring. Boooooooooooooo. In the two seasons I’ve watched of that show, one was with Gwen and the other was with Christina. Gwen is a much better judge. I like how this story says that Christina has been a judge on every season “except 4, 6, 7, and 9.” Ummm, yeah. That’s almost half of their show. What an odd way to word it. That’s like saying Melissa Rycroft co-hosted every season of “Bachelor Pad” except “seasons 2 and 3.”

-The DWTS switch up pairings were announced yesterday for Monday’s show. Honestly, I think it’s the worst gimmick they do. Why? What’s the point? Just keep them with their same partners all season and let things play out. Switching them up really does nothing or adds anything valuable to the show. We already know who’s going to the finals pretty much. All this can do is maybe throw a wrench into things and send someone home earlier than they should.

-With the Ghostbusters re-boot happening and I believe getting released next summer, one original cast member who won’t be appearing is Rick Moranis. What? No, Louis Tully? No, Vince Glortho, keymaster of Gozer? Dammit. Then again, I didn’t realize until I read this story that Rick Moranis gave up acting a while ago. No wonder I haven’t seen him in anything. And thank you Rick for echoing what I’ve been saying for years – Hollywood is completely unoriginal. They just don’t make movies like they used to. Sucks.

-Khloe Kardashian decided to do a workout/photo shoot in just a bikini yesterday so she could show everyone her ass. I guess. Not really sure what the point of this was, but then again, we’re dealing with a Kardashian. Is there ever a point other than self-promotion to anything they do? Didn’t think so.

-Now this is some good stuff. I wish more audition tapes would get released. Here’s Blake Lively and Ed Westwick auditioning for “Gossip Girl” back in the day. Chuck Bass is definitely a legendary TV character. Problem is, every time I see the trailer for ABC’s new show “Wicked City” with Ed Westwick, I can’t help but think it’s just Chuck Bass on a different show. Some people can never escape an iconic character.

-Maybe you should think twice about how many women you sleep with on the road, eh Victor? So Victor Cruz’ fiancé busted him with all his mistresses by sending out a group text yesterday letting them know they’re a bunch of wh**es. While some may think it wasn’t real, or there’s no proof the text didn’t come from his fiancée, it did because Cruz confirmed it. Oops. Nice job, Victor. Funny thing is I just saw his fiancée on an episode of “WAGS,” and now this. I have ODB on my fantasy team, so this is all fine and dandy to me.

-Please tell me you saw the story and video of the 12 year old girl here in Texas that can’t stop sneezing? No, we’re not talking she’s got a bad case of allergies. Far from it. She sneezes 20 times a minute and 12,000 times a day. Yikes. That can’t be fun. That’s a lot of Kleenex she goes through. Someone might want to get her a lifetime supply.

-Two sports stories to end the column. If there’s ever a fight between teammates (or former teammates) in sports, there’s only two reasons it could be about: money or sex. Well, Matt Barnes isn’t happy Derek Fisher is now banging his ex-wife so he took matters into his own hands, literally. Who cannot wait until the Grizzlies play the Knicks this year? Will Barnes just cold cock Fisher out of the blue while he’s standing on the sidelines?

-And finally, this from Katie Nolan, host of “Garbage Time” Wednesday nights on FS1. You know I live in Dallas, but I’m not a Cowboy fan. I’m indifferent. I don’t care what they do. But this is about as real as you can get from a TV personality regarding the Greg Hardy situation. His answers were talked about a lot out here on sports radio, and no one had the balls to say what she did. This is a good 3 minute rant and everything she says is dead on:

.@katienolan offers her take on Greg Hardy's return to the NFL. https://t.co/6KWcvN2OdP