We have now completed four episodes of filming for the “Bachelor.” They are leaving Las Vegas today and heading, well, I don’t know where they’re headed for sure. Yesterday I told you I’d heard they were going to Denver this season, which sounds logical. Last two “Bachelors” filmed an episode in their hometown, and since Nevada and Colorado are close, it would make sense if they went there next. Not sure though. It’s much easier for them not to be seen on dates in LA (since basically none got out on social media), because there’s filming all the time going on in LA, so nothing would ever seem out of the ordinary. But if they do go to Denver, I’m sure dates will get spoiled. If I get it confirmed, or see on social media they are there, I will tweet it out over the weekend. But still, this is the fun time for me. I enjoy piecing together everything I can based on the little info that’s been spoiled on social media. I’ve still got 10 girls to release (by the way, 3 of which all have the same name) at some point, but I’m enjoying the lack of social media spoilers this season. Let tabloids run all the bogus stories they want about this season. It’s all garbage.

Yesterday we got another little nugget on Instagram. Some concierge worker at the Mirage tweeted out these pictures from the group date on Tuesday at Terry Fator’s show: 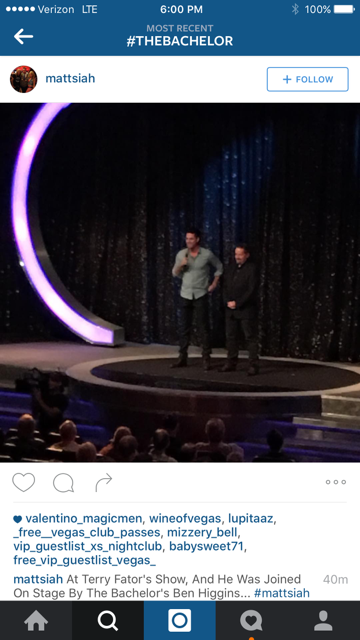 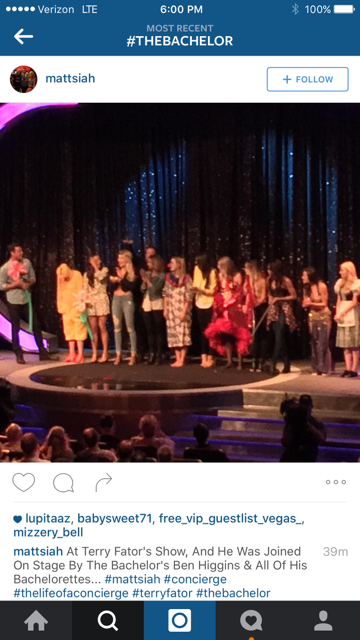 Too far away and too blurry to make out who everyone is on that stage other than the obvious of Amber fourth from the left. Breanne’s definitely not in the picture because, well, she was already eliminated. We know Olivia is on that date because she was in the video that’s now gone. But hey, at least it’s something since that video was taken down the other day. And no, that girl who posted the video in front of the Mirage on Tuesday still hasn’t responded to my email. Man, producers must’ve really scared her. Your spoilers are coming just like they do every season. Patience my friends. On to “Daily Links…”

-Someone asked Chris Soules if he still keeps in touch with Whitney, he answered in one sentence, then they made a headline of it. If you read the story, it’s pretty much all about his farming life and what he’s doing back in Iowa. But because US Weekly are notorious for headline chasing, they made the headline about Whitney, when he really doesn’t say much about her other than “we’re friends” and “she’s doing great.” Great. Glad you can speak for her. And if she wasn’t doing great for whatever reason, I highly doubt Chris would’ve told us that.

-I totally forgot that “Speed” did a sequel. Probably because it sucked so bad compared to the original. And Keanu Reeves wasn’t in it. He talked about the “Speed” sequel he wasn’t in on Jimmy Kimmel the other night. Probably a good career choice, Keanu. Didn’t the boat at the end of the movie end up crashing into the dock? What a horrible movie. At least make it “Speed” on motorcyles or, you know, something that actually goes fast. Not a cruise ship, morons. Jet ski’s? Trains? Airplanes? Anything but a cruise ship. No wonder Keanu hated the script. Who wouldn’t?

-Booted “Survivor” contestant Peih-Gee spoke with the media about getting booted from her tribe, even though their alliance had a 4-2 advantage. I know people are still saying how come people haven’t voted Abi out since she’s so annoying. That’s the thing. I think that’s the reason they are keeping her around. She’s annoying and she’ll never win any votes in the end, so of course people want to keep playing with her. Although I’d rather play with people who deserved to be there, I still understand that strategy.

-Man, it has not been a good couple week for DWTS contestant Alek Skarlatos. First there was the school shooting in Oregon, where he would’ve been enrolled at. Now, his buddy Spencer Stone who was with him when they apprehended that terrorist on the train overseas, was stabbed multiple times the other day and was hospitalized. Sounds like he’s ok, but you can assume this will be added to Alex’s video package this week on DWTS.

-Speaking of DWTS, Derek Hough’s blog is now up regarding this week’s switch up. He’s got Alexa as his partner, while Bindi is with Val, which pretty much secures both of them another week on the show. Speaking of Alexa, I saw “Spy Kids” when it first came out, and I watch “Nashville” religiously, but I had no idea until the DWTS cast was announced that Alexa was both of those girls. Hell, forget “Spy Kids,” I didn’t even know Alexa PenaVega was Gunner’s ex from last season, and I’d just watched it. Apparently I wasn’t paying attention enough.

-So I posted the story yesterday about Victor Cruz’ fiancée busting him by sending out a group text to all the women he was banging behind her back. Apparently the day before, Victor knew this was gonna blow up in his face, and had posted on social media that “God would take care of him,” hinting at a sign of things to come. Let me tell you something Victor, God isn’t intervening here. Your bed, now lie in it. God is probably a Cowboys fan anyway and is happy this happened to you.

-Mark-Paul Gosselaar says that his kids binge watch old “Saved by the Bell” episodes. Soooooo, that makes them no different than any of the rest of us red blooded Americans. Have they told you how bad Jessie Spano’s acting was when she was hopped up on caffeine pills? They should’ve seen that episode by now. Let us know what they think about when you got your panties in a bunch once Kelly started dating that college dude Jeff, played by Patrick Muldoon. You were a real loser that episode.

-The Matt Barnes/Derek Fisher fight story took another turn yesterday. It was first reported that Barnes had driven all the way from Santa Barbara because he heard Derek was at the house and he was pissed. Barnes says that’s not what happened. He explained his side to reporters yesterday. Hey, I wasn’t there. I don’t know what happened. Nor do I really care all that much. I just can’t wait til the Grizzlies play the Knicks and Derek Fisher orders the code red the first time Barnes comes charging down the lane. Someone might get decapitated.

-Katy Perry has spoken. All men, listen up. This is how she wants her men groomed. Thank you for that Katy. Will take it under advisement. Now, if only you’d stop dating and marrying sex addicts, everything would be wonderful. Not to mention, a guy that’s about 100 lbs underweight with giant bug eyes. I’m not asking much.

-Kendall Jenner. Shower pictures. Discuss. I mean, for the love of God, just do “Playboy” already. We know you’re going to. And basically every photo that comes out of you now is you ¾ naked. Is Vegas taking odds on what year her “Playboy” shoot will eventually come out? Lets hope so because I’m going to win a sh** ton on that.

-Taylor Swift is now the queen. Not that all of you shouldn’t have known that by now, but yesterday it became official. She now has reached 50 million Instagram followers, surpassing Beyonce and Kim Kardashian and is now the leader. Of course she is. However Taylor, I can assure you it’s not because of your cats. The fact she is such a cat woman is like the biggest red flag she has against her. Hopefully she’ll see the light someday and graduate into getting a real pet, like a dog.

-Victoria’s Secret is getting a little backlash today for a recent tweet they sent out. Great ad for their underwear line, but ummmm, this girl seems to be missing her left butt cheek. If it’s photoshop, they did an awful job. Especially when her right cheek seems to look perfect normal. Could it be the angle she was standing? I guess. I don’t know. But they’ve taken enough heat already for this that I’m sure a statement will be released sometime today addressing this picture. Or the picture will get taken down. Count on it.