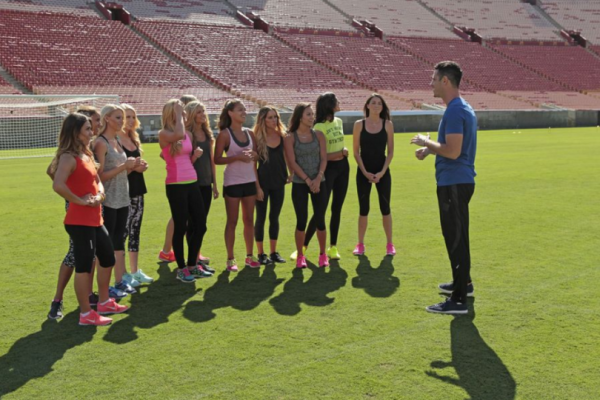 It’s almost like I can write two different columns on this show that would be completely separate from each other. One would just be to recap what we see for two hours every Monday night. Then the other would be to point out all editing and continuity mistakes for a whole episode. Not to mention, the inside stuff I learn about season by season. I try to mix the two as best I can but sometimes, in episodes like last night where there was so much producer prodding and coaching, it comes out in the column. It’s all fun and games anyway and it’s why I don’t take the show seriously for a second, but it’s a fine line to draw when recapping it. I can’t pretend I don’t know what’s going on behind the scenes and what’s happening now in the social media world. So I’m just gonna continue to write about what they show us, but then also fill you in when I can when there’s obvious producer manipulation happening and/or any inside information I can give you regarding the girls and the show. I mean, after three episodes, everything I told you two months is playing out like I said it would. Olivia is going to be the most talked about contestant for the time she’s on, whether warranted or not. She gave them plenty of ammo to work with, so that’s the girl producers decided to have a field day on this season. It’s only gonna get worse.

Some news to report on Tanner and Jade’s wedding. It’s happening this Sunday, and I’m pretty sure it’s gonna be in Dana Point, CA. Don’t have full confirmation, but if it is Dana Point, my guess is it’s at the Ritz Carlton Laguna Niguel. Would make the most sense since that’s the nicest hotel down there. Plenty of former cast mates will be there: JJ, Jared, Ben Z., Cupcake, Carly, Juelia, and Clare to name a few. Ben Higgins will definitely be there as well. It will be filmed Sunday but not shown until Valentine’s Day on ABC. I’m guessing though paparazzi pictures will end up getting out before then. Especially now that I’m pretty sure I just leaked the location since no one else has. As I mentioned on the live chat Thursday, I am surprised that they’re getting their own show, but mainly because Tanner & Jade haven’t been on our TV at all. The last that their “TV” audience saw them was in September when their engagement in the BIP 2 finale was shown. Of course people follow them on social media, but that’s such a minority of their audience. So from September until the Rose Parade, no one ever saw them on TV or making “Bachelor” TV appearances. At least with past couples like Sean & Catherine, Ashley & JP etc we saw them appear on “Tell All” and “ATFR” shows to update us on their relationship. Outside of their :60 Skype appearance last Monday night, the “Bachelor” audience saw them get engaged in September and now will see their wedding air on Valentine’s Day. Just a bit odd if you ask me, but whatever. I get why they’re doing it because who doesn’t want a free wedding, have friends and relatives all paid to be flown out and put up in a hotel, and make money on top of it. But it’s definitely the quickest engagement-to-wedding this show has ever had. They must really be trying to shove love stories down our throats.

A few more media hits last week in case you weren’t following me on Twitter. Juliet Litman’s “Bachelor Party” podcast that I appeared on after Week 1, had it’s second episode last week, and Juliet’s special guest was Jon Caramanica, the NY Times writer who penned the feature on me a couple weeks ago. The whole interview is very good, and they even talk a little Reality Steve in the beginning. Check it out:

Also did an interview with CBC radio last Friday talking about all things “Bachelor” that you can check out. One tense moment in there, but other than that, I thought it went well.

And of course you know by now I did Jenny McCarthy’s “Dirty Sexy Funny” satellite radio show last Thursday morning. I know it ran on her channel all weekend, but I haven’t been able to get a link to the full interview yet (not sure if I will either), but she did make one clip from it available online that you can listen to:

Ratings are in from last night and numbers are back up from last week and on par with exactly where they were a year ago during Chris’ season. Obviously competing against the national championship game last week dipped the ratings, but yesterday they drew 7.5 million viewers (same as the premiere) and a 2.1 rating. Chris Soules’ third episode last season? 7.5 million and a 2.1 rating. As for the garbage that is “Bachelor: Live,” that didn’t go up from last week. Stayed the same in overall viewers with 3.9 million, but down to a .9 rating from the 1.0 last week.

Chris Harrison’s blog is now up and is he just basically mailing it in this season? Geez. Nice effort Chris. He basically says absolutely nothing in that recap. He used to be way more wordy in these things. And all he’s doing it parroting what we see on TV and offering no insight whatsoever. It’s ok, Chris. That’s what I’m here for. As for Ben’s blog, pretty much what you’d expect. He’s not gonna give anything away and he’s going to be nice to everyone.

Nell Kalter has your Vanderpump Rules recap now up for your viewing pleasure. I have no idea how Nell does it pumping out two recaps a week on those shows, but she’s here every Tuesday and Wednesday w/ her Vpump and RHOBH recaps, so check them out.

I’m sure most of you didn’t see this but it was emailed to me last week. Olivia posted a blog about basically being an introvert. Funny thing is when reading it, it basically described me to a T. I identify with everything that her column says, so I guess you could say Olivia is my spirit animal. Does it excuse her behavior? Of course not. But it gives a little more insight as to probably why she acted the way she did on the show. When you don’t do well in large groups and small talk isn’t your forte, things can basically only go bad for you in the setting of this show. Doesn’t mean she couldn’t have said no when producers obviously prodded her for great soundbites, but you can see why she trusted them so much, and now they’re exploiting her.

But hey, that’s just my opinion. I’ll ask you in today’s poll question: