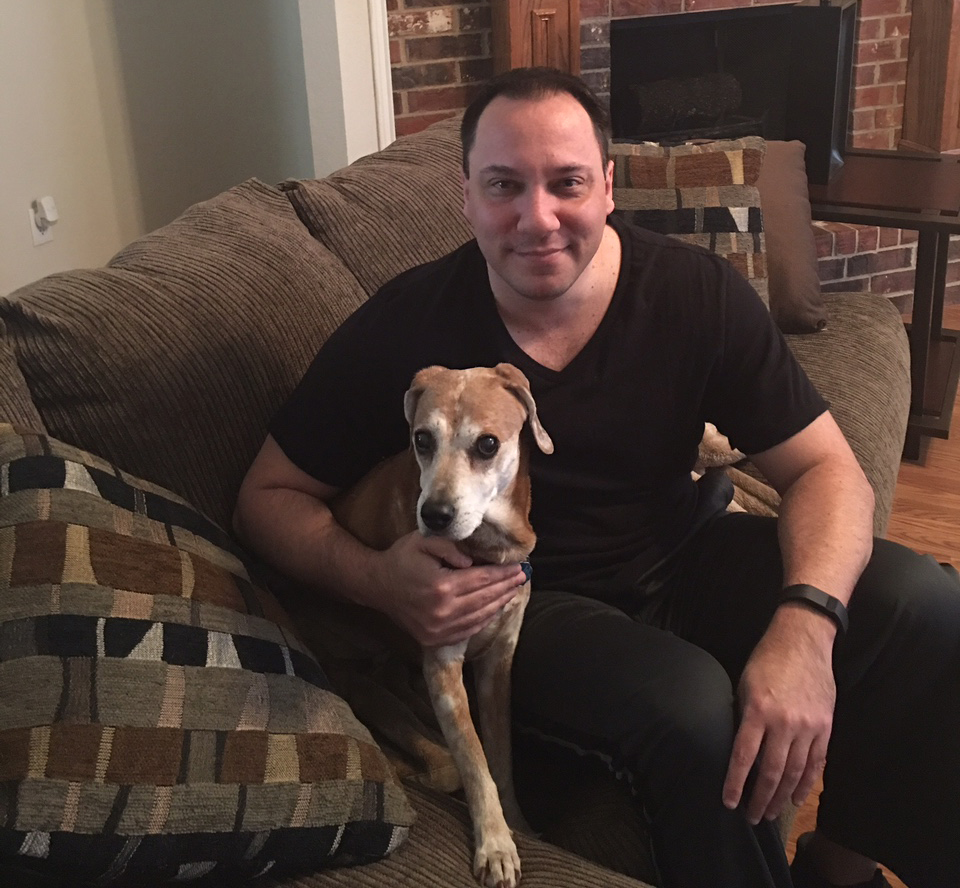 This is by far the hardest thing I’ve ever had to write in my life. Nothing even comes close. There will be no recap today, “Reader Emails,” “Dr. Reality Steve,” or live video chat this week. Excuse me for grammatical errors, run on sentences, or just for rambling, but this is the most therapeutic way for me to deal with what I’m going through. I don’t know any other way than to let all of these feelings out right now. I’ve cried enough in the last 24 hours to last me a lifetime. My sweet Maddie was diagnosed in the last couple days with hemangiosarcoma, which is an aggressive form of cancer that’s spread to her spleen and liver. Maddie started feeling pain over the weekend, and has since gotten a little bit better, but once the doctor explained everything to me, I knew I did not want to see her go through any suffering. It’s not a matter of if, but when. No surgery, no chemotherapy, and nothing I can do can save her now. We are probably not even talking month or weeks. More like days. The picture above I took yesterday with her knowing it was going to be the last. I’ve made the decision to put Maddie down later on this afternoon…

Just writing that sentence, I can’t help but cry uncontrollably. This is the worst feeling I’ve ever had in my life and nothing compares. I knew Maddie wouldn’t be with me forever, but I wanted her to. I can’t believe it happened so quickly and my girl is going to be gone. I am utterly devastated. I know a lot of you have followed me for a while and seen Maddie in pictures (even recently on Twitter) and on the live video chats, so I wanted to share her story with you. Maybe I’ll feel better after this, maybe I won’t. All I know is that Maddie is the only dog I’ve ever owned, and at this point, I don’t see myself ever owning again. Sure, I say that now and maybe in a few years I’ll change my mind. But from where I sit right now, just hours away from letting the one thing in my life go who’s meant so much to me, I just want to give her the respect she deserves and say I will never love any pet again as much as I loved her.

I adopted Maddie on March 15th, 2008 when the local Humane Society had their bi monthly visits to PetSmart to have dogs adopted. At the time, I wasn’t in the market for a dog. I never had a dog growing up, or any real pet for that matter, so I don’t think I could’ve ever been labeled as a “dog person.” Just wasn’t me. I wasn’t against them, but having never lived with one, I was pretty indifferent. Over the years, my sister had dogs and once I grew close with them, I knew I probably would get one eventually, but I certainly wasn’t planning on getting one that day. I remember that Saturday like it was yesterday. My friend Todd from California was out visiting me, and we had had lunch in the strip mall that day where PetSmart was. As we were exiting the strip mall, I saw a bunch of people out in front of PetSmart and dog cages so we decided to just go check it out. Little did I know what I was in for…

The first dog that I saw was Maddie. She was curled up in the back of her cage and wasn’t really responding to anyone. Most of those dogs love the attention when you come up to their cages. Maddie was the opposite. She never moved. She seemed very timid around everyone there, including me. When I asked if I could see her, they brought her out of the cage and she was petrified. Her tail tucked under her legs just walking around in the store, I had no idea what I was doing. I was asking myself, “This dog doesn’t even like me. Why would I want her?” But having little experience with dogs, I decided to spend a little more time with her in the play room and she opened up a little. Basically, never walked more than 2 feet away from me and huddled around my chair like she didn’t want me to let her go. I remember thinking at this moment that if there were ever a dog for me, this one was it. Wasn’t barking, wasn’t yapping, timid, and not very outgoing – kinda like me. I told the lady I’d like an application to fill out, and that if anyone else there wanted Maddie, please let me know because I really wanted her and would do whatever I needed to to get her. The next night, they called me up, said my application was accepted, and they’d bring Maddie over immediately. Even though I was the one who ended up choosing Maddie, in reality, she really chose me.

To say Maddie didn’t take to me and my place instantly would be an understatement. I remember when she came over, the foster mom let her off her leash, Maddie smelled around, went into my room, and went under the bed…and never came out until the next morning. The foster mom told me she liked to either sleep under the covers, or under the bed, and I guess she’d found her new “home.” So for my first night with Maddie, I never got to do anything with her other than bargain to try and get her out from under the bed. Didn’t happen. Once I realized this was a common occurrence for her when I was gone, I had to put books and plastic bins under my bed to block her from ever going under there. From that point on, the top of my bed then became Maddie’s new home.

Ever since then, Maddie has slept in the bed with me every night she’s been here. Most of the time on top of the covers by my feet, but during the night at some point would make her way up to my head, I’d lift up the covers, and she’d go right under crawling back to where my feet were. Or, sometimes just curl herself up in the V-formation of my legs when I sleep. It’s what I’ve been used to for almost the last 8 years, and I wouldn’t have it any other way. You know, before Maddie came along I remember having a conversation with a girl I was interested in and she had told me that in her past relationship, she basically ended it with her ex-boyfriend because he didn’t understand why her dogs had to sleep in the bed with her at night. At the time, I’m listening to this story, having a strong interest in this girl, but all the while thinking, “Well yeah. What guy would want that?” I thought she was the crazy one. Fast forward to about two years ago, and I saw something about her on Facebook that had popped up, so I decided to reach out to her. I sent her an email just saying basically I remember when she told me that story about dumping her ex because he couldn’t stand dogs in the bed and thinking she was crazy – but now I understand. Any girl that I’ve been with since 2008 knows full well about Maddie and that she was going to sleep on the bed every night. Those that could handle it were great. Those that didn’t, well, you guessed it. They didn’t last long.