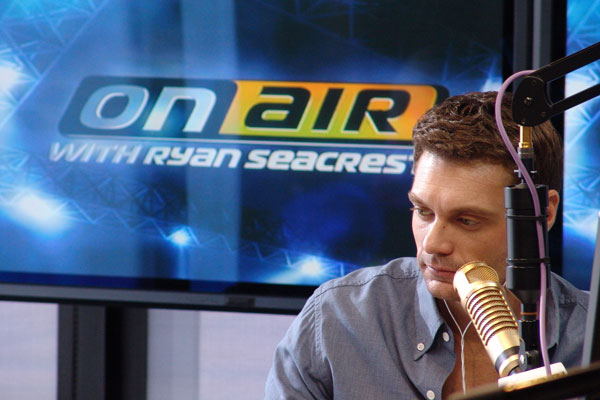 In touching on what I mentioned yesterday about the fake morning show bits (again, sorry for those who had no idea those weren’t real. I heard from plenty of you), here’s another one for you. I think this one is a little more well known, but maybe that’s because I was in radio and understand how syndication works. If you’re not currently living in Los Angeles right now, but yet you hear Ryan Seacrest’s radio show on in your city, you do know that he’s not broadcasting from your city, right? I know, I know. That may seem obvious, but I’m telling you, some people think he is. Like, even though maybe you hear him saying, “It’s Ryan Seacrest on 101.3 FM KIOI in San Francisco, here’s Adele…” (one of his affiliates), he’s not actually broadcasting from San Francisco or from that station. All he’s doing is cutting liners with other stations tags that broadcast his show to make it feel to their audience that “he’s one of you.” I bring this up because I remember hearing Seacrest in the car here in Dallas because he’s on 102.9 FM and someone I was in the car with saying to me, “I didn’t know Ryan Seacrest lives in Dallas.” And it’s not just Seacrest. Plenty of radio shows from all different cities broadcast in other markets. But Seacrest’s “home” station is 102.7 KIIS FM in LA. So if you’re outside of that signal, you’re hearing him on tape. And oh yeah, Santa Claus isn’t real either.

Help! My husband is driving me crazy. He never finishes anything. For example, he’s hungry and wants to make a sandwich. He gets all the stuff out, makes the sandwich, eats it, then goes on with his day. He doesn’t finish by putting everything away. He goes to get the mail, the phone rings, he puts the mail down, then he remembers he has to take the garbage out. Where is the mail? He doesn’t know. Why didn’t he put a fresh bag in the garbage can after taking it out? Because something else came up. He’s been tested for ADD and doesn’t have it. Plus, he’s always losing things. Takes his glasses off, then remembers the laundry needs to be folded (I’m lucky he enjoys doing laundry), then needs to go to the dry cleaners, but where are his glasses? He has no idea. Arghhhh! Nothing I say or do, no matter how kindly I am, makes any difference. I’m tired of him asking me to help find what he lost/misplaced, and I am tired of being the bad guy when I ask him to finish what he started. Help me understand or cope or something! I suspect it’s going to be cope… Frustrated in Portland

Comment: C’mon, you couldn’t have done a Pissy in Portland? Or maybe a Perturbed in P-Town? Shame on you.

You’re definitely not being a bad guy by reminding him of this stuff. However, there really doesn’t seem to be much you can do. I guess you can look at the bright side and realize if this is the WORST thing you have to deal with in your marriage, then be thankful. Yes, this would drive me absolutely nuts if I were in your shoes, but I guess things could be worse.

As for a solution to fix it? I doubt anything will make him all the sudden remember to do all this stuff, but maybe turn it into a game. Every time he doesn’t forget something, or remembers to do something he normally doesn’t remember, he gets rewarded. It’s up to you what type of reward to give him, but going the sexual favor route would probably work. That’s all up to you though.

Apologies for the somewhat late notice with my Dr. Reality Steve question, but here it goes…

Five years ago when I was in my mid-twenties I dated a guy I will call “Ryan” for a little over a year. He treated me really well and it was a wonderful relationship, but it just didn’t work out for a number of reasons. I ended things and it was amicable, but I was his “first love” so he took it very hard. While I was dating Ryan, I met his cousin who I will call “Craig” a couple of times. Craig and I got along really well (almost too well) but I didn’t think too much of it at the time because I was with Ryan.

Early this summer, I began thinking about Craig again and wondering “what if” so I decided to contact him. The moment we began talking, we both felt an immediate connection. We met up for a weekend and it was honestly the best weekend of my life. We have been together ever since and things have been amazing. I am almost 30 and he is 34, and neither of this have ever felt this way. His actions consistently match his words, he looks at me with love in his eyes, and we consistently talk about and plan for the future. However, the unfortunate circumstances of how we initially met continuously lingers in the background of our relationship.

Several months ago, after his extended family discovered we were together, Ryan’s sister sent Craig some very nasty text messages about me. Basically, Ryan’s sister told Craig that she does not trust me and that I am disrespecting their family by dating Craig. Craig was really upset by this, and we had a rough few days. (Keep in mind that Ryan himself has never contacted Craig about this. When Craig and I initially began talking this summer, Ryan told Craig that though this whole situation was uncomfortable for him, he was over me and Craig should “do what he has to do.”) Ultimately, after this drama transpired a few months ago, Craig decided that he loves me and wants to be together. Since then, Craig’s immediate family has expressed their support for us, and the issue has not come up again with his extended family though they saw each other over the holidays.

So, I have three questions for you (and anyone who cares to weigh in):

1) Are Craig and I doing anything wrong by dating? Absolutely not. Especially since Ryan doesn’t seem as bothered by it than his sister is. Is it uncomfortable for some family members? Sure. I don’t think you’re naïve enough to think that at least a couple people might’ve been a little weirded out by the situation. But all in all, outside of Ryan’s sister, seems like people have accepted it.

2) Should I be concerned that months after the initial conflict with his extended family Craig has still not had a direct conversation with Ryan about his and I’s relationship? (Some people have told me that “guys just don’t talk about those sort of things” but I still feel like there needs to be some sort of conversation.) Didn’t you say just recently that Craig basically decided he loves you and wants to be together? He doesn’t need to have his man-to-man with Ryan right away. At some point, sure. But this sounds like it’s fairly new, plus I don’t know how close Ryan and Craig really are. If Craig thinks things with him and Ryan will never be the same, then that’s the decision he’s made. That’s not on you. He knew what he was getting into dating his cousin’s first love. It’s not like this was out of nowhere.

Plus, you have the whole issue of 5 years have passed by. Some people in this world think you never date a relative’s ex, some think it’s fair game, and some think it’s fair game as long as there’s some sort of grace period. It’s different for everyone and there’s no universal answer. So based on what you told me, everyone seems fine with it outside of his sister, and maybe Ryan is still getting used to the whole thing. But other than that, no one seems to have a problem with it. At least not now. Can’t predict the future, but it looks pretty solid at this point, so just continue doing what you’re doing.

3) How should Craig approach this with his extended family? How many from the extended family are having a problem with this? Sounds like only Ryan’s sister at this point. And even Ryan told him in the beginning he was over you and for him to do what he needed to do. Granted, he could be saying that just to save face, but at this point, what is Ryan gonna say? “I don’t want you dating my ex. Make choice, me as your cousin or her as your girlfriend.” I highly doubt that. If he does, then again, that’s nothing you have control over. That’s just a consequence of dating an ex’s family member. Everyone handles it differently. Ryan seems to be fine with it to the point where he’s aware what’s going on, but hasn’t made any sort of ultimatum yet. Will family functions be a tad awkward in the beginning with you and Craig together and Ryan being there? Probably. But maybe only while Ryan is still single. I guarantee if he gets a gf (or if maybe has one now), it’ll be water under the bridge. Will all three of you ever go on weeklong vacations together and be BFF’s? Probably not. But I doubt you were expecting that. In fact, be thankful that it’s just been a few nasty texts from Ryan’s sister that only seems to be the drama you’ve dealt with so far. As I said, everyone is different. Stuff like this has been known to divide families all together. This looks pretty tame right now.