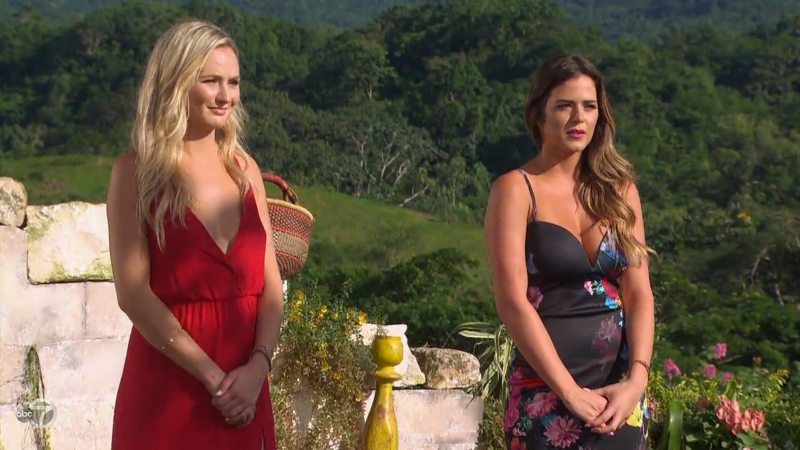 A lot of emails this week regarding the Caila vs JoJo debate. You take into account yesterday’s poll question, then read a lot of these emails, you’ll see most people are way more Team JoJo. As am I. However, I don’t think that means anything. I will stand by what I’ve said for the last couple of weeks and I really think that we’re headed for a season of Caila as the “Bachelorette.” Nothing official yet as the announcement obviously hasn’t been made, and I haven’t been told by sources that she’s locked in, but I just get a feeling based on numerous factors that they’re going to eventually go with her. I’m sure that won’t make a lot of you happy, and you’ll probably tell me that you won’t watch next season. Just know that that doesn’t matter. Have you looked at the ratings for the last two “Bachelorette” seasons? Both seasons roughly averaged 6.5 million viewers a week with both finales pulling in around 8 million viewers. Regardless of who gets the “Bachelorette” gig, I fully expect those numbers to be exactly the same. Just remember this paragraph once the “Bachelorette” season ends and then tell me again, “But no one wants Caila as the Bachelorette.” I’m telling you, it doesn’t matter. People are going to watch anyway. Hell, we have people in the emails this week basically say they can’t stand Caila but are still going to watch. They’re going to be fine whoever they choose. It’s the formula that people watch, not the lead.

Obviously all the talk yesterday surrounded Ben telling both Lauren and JoJo that he loved them and that’s all anyone can talk about now. Every news outlet that covers the “Bachelor” had that as their main focus, it’s the cover of US Weekly this week, on and on and on it goes. And that’s exactly what the show wants. The show’s producers don’t just show up the first night of filming, start recording, then go “ok, what do we got here?” They know everything about every girl cast months before the show even starts. And there are production meetings upon production meetings to map out how they want the season to go in terms of storyboarding everything. UnREAL showed a glimpse of this, but it’s not just for the “Bachelor/ette,” EVERY TV show does this. And TV is a very copycat market. Name the last original idea you saw on TV? Especially in the reality TV world. They all copy each other in some way, shape, or form. And when your show is on for 31 seasons, you absolutely have to think of ways before the season on how you’re going to make things different, all while keeping the basic fundamentals of the show the same. Every season this show has to come up with a way at the end to keep people guessing on who the lead chooses. Or what the conflict is. For Kaitlyn’s it was having sex with her final 2 guy and making a huge deal out of it. For Desiree it was dealing with Brooks leaving. For Ben it’s the two “I love you’s.” The list goes on and on. You’ve seen the show. You know every season there’s some conflict at the end that has the lead torn on what to do.

Well knowing that, and knowing that producers get their ideas from movies, tv, books, etc, this hit me yesterday when I was reading an interview that Chris Harrison did. Even though I didn’t read his book, did you know that Chris Harrison’s novel is about a man who’s in love with two different women? (Correction: His book is about a woman in love with two different men. But point remains same. Hey, maybe we’ll see that on the next “Bachelorette” season) Granted, none of this can ever be proven, but I tend to think now that this was their storyboard before the season even started. Didn’t mean they sat Ben down before the first night and said, “Ok, when we get to the end, you’re gonna do this.” But I could easily see producers by themselves sitting around before the season season saying “Why not have Ben in love with BOTH his final 2 and tell them. That’s something we haven’t done before.” I certainly wouldn’t put it past them. Then during filming, and probably once they got to Jamaica, it’s very easy to coerce Ben into telling both women he loves them. All it takes is a producer telling Ben to go with his feelings, and if he feels like telling someone in the moment that he loves them, then go for it. That part is easy. I just find it very coincidental that we’ve never seen this storyline 31 seasons in, and Chris Harrison’s book just happens to be about a man in love with two women, and now that’s the storyline they’ve been pushing on us for the last month of the show and will focus on for the next two weeks. Certainly not far fetched to think Chris’ book put the idea into producer’s head on what to do this season. Things that make you go hmmmmmmmmmm……

Get your “Dr. Reality Steve” emails in for tomorrow. We’re currently at 6. Just a few more would be dandy. I’m ready to go.

Nell Kalter’s RHOBH recap is now up for your viewing. That’s all. Go read it. It’s funny. I laughed and have no idea who or what she’s talking about.

It’s fantasy suite time, and Molly Hawkey finally gets her alone time with Ben. How did that turn out? About how you’d expect. Check out her latest edition…

I know you’re expecting some boffo “Women Tell All” spoilers to blow your socks off. Like most “Tell All’s,” this turned into a whole lot of nothing. Here’s what I can report:

-There were 17 girls on stage: Jami, Rachel, Jen, Lace, Amber, Caila, Becca, Olivia, Lauren H., Emily, Haley, Jubilee, Leah, Amanda, Shushanna, Tiara, and Izzy. So basically everyone who was on the show from episode 3 on, plus adding in Tiara and Izzy who were eliminated night one. And obviously minus Lauren B. and JoJo.

-4 girls were called up to the hot seat: Lace, Jubilee, Olivia, and Caila.

Lace was asked about Paradise and eventually said she’d like to go on it. Mark it down. She’s gonna be on it. Also, a guy came out from the audience who got a tattoo of Lace’s face on his stomach.

Jubilee was attacked mostly by Jami & Amber for playing the race card. Jami doesn’t like the fact that Jubilee uses the n-word with her. Jubilee keeps reiterating that everyone knows she’s “the black one” of this show. Uhhhhhh, ok. Then again, if you saw any of the photos/videos on snapchat of the afterparty, Jubilee was in a lot of them, so within hours sure looks like everyone was over it.

Olivia did apologize to Amanda for the Teen Mom comment, but was definitely under attack by girls like Emily, Amanda, Lauren H., and Jen. Talked about the things she told Ben about why she didn’t get along with the girls, they said she never gave them a chance, and basically nothing got resolved. Olivia did start crying when talking about her time on the show, the bullying she’s received on social media, etc. I’m sure more will be made of this when it airs, but a lot of girls did chime in to the way she acted during the season. Olivia didn’t really take anything back and never gave an overall apology. Lets hope this is the last we see of her and she just stays away from the franchise now.

Caila had to re-watch Ben dumping her and got a case of the sadz. Said she was heartbroken, but then forced to move on. Heard it was definitely her audition for the “Bachelorette.”

Leah apologized for lying about what she said about Lauren when that was brought up.

When Ben came on stage, the usual suspects talked to him, but there weren’t any major fireworks. I’m sure the promos will make it seem there were, but most of the women had nice things to say about him and there weren’t any unresolved issues with anyone.

They showed bloopers which I hear weren’t all that great.

Overall, Jubilee and Olivia are the ones who took most of the heat up on stage, as expected. But overall, somehow they’re going to milk this thing into a two hour show like they do every season. Don’t expect much and you won’t be disappointed.