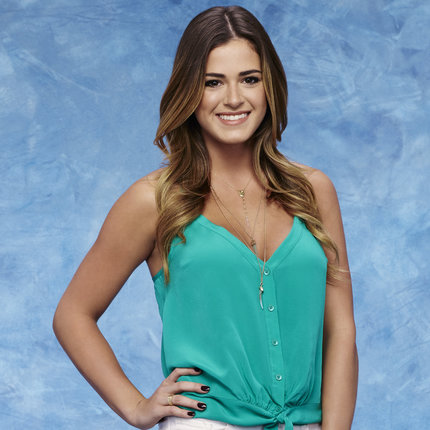 Every season on the “Bachelor/ette” rumors fly. It’s inevitable. Mostly they are unsubstantiated rumors perpetuated by tabloids that quote “sources,” “insiders,” “friends close to the situation,” etc. However every once in a while, although rare, they actually do their job and contact someone directly involved and interview them. In Touch came out today interviewing JoJo’s ex Chad (the one who sent the flowers and she called during hometown), and he basically sold her down the river. Says they got back together while the show was airing and had to sneak around to not give anything away, that JoJo wasn’t really in love with Ben and it was done for TV purposes, and that he felt used by her knowing she had a chance to be the “Bachelorette” and dumped him the second she got the chance. You can read the interview here. By the way, the producer that Chad is talking about who is friends with her brother Ben is Louis Caric, who was a producer on Ben’s show “Ready for Love.” Shocker. My stance has always been the same on ex’s that talk to magazines: just because they are paid to give exposes like this, doesn’t mean it’s not true.

Do I think they hooked up after she got home from filming? Absolutely. I was told by at least three different people they were seeing each other. But sometimes for me it’s just better to let sleeping dogs lie. I was never gonna get an interview with Chad, there was no way to prove what I’d heard, and it would’ve started up a giant sh**storm that I really didn’t want to be a part of. So thank you Chad for doing this yourself as I didn’t have to be the bad guy for once, even though I’m just the middle man in all these stories. Did I know the extent of it? No. Was I surprised? No. Plenty girls from this show go running back to the comfort of their ex when they get home. We’ve seen it time and time again. JoJo is no different. In terms of their conversations and what she told him, yeah, we’re only getting his side. I’m not necessarily sure I fully believe JoJo didn’t have any feelings for Ben or that she’s not looking to find someone on her season. That’s his opinion based on what he knows about her, which is quite a lot considering their history, so you can take that for whatever you think it’s worth. I doubt this will be a storyline this season, nor do I think Chad will appear in any form for a second time. However, the base of what Chad said, that JoJo is out to help her career isn’t anything new. We know that’s what a lot of these people are doing. So no one should be the least bit shocked by this. I’m sure everyone who loves JoJo will defend her and call Chad slime, and those that dislike her will pounce on this story. Same ol’, same ol’. For me, it’s par for the course. Nothing in this story surprises me. This is what the show has turned into.

Now, lets get back to what’s happening today. Today is a group date in LA, and JoJo and the guys will be “performing” at something called Sunday Night Sex Talks. I know that link doesn’t say anything about the “Bachelorette,” but trust me, that’s what today’s date is gonna be. Just looking at that site, looks like it’s a roundtable discussion on Sunday night’s where people sit around and talk about sex. But for today’s date, they moved it to Wednesday. Well, last season on the third episode, Kaitlyn took 6 guys to a school where they had to teach little kids about sex, so a date like this seems right up their alley. Hopefully by the end of today either on Twitter, or in my column tomorrow, I’ll let you know exactly what happened on the date.

-Nell Kalter has your RHOBH recap up now for your viewing. Do we have less than 100 episodes left this season? Or are we pushing another 150? I lose track. It’d be nice if each season didn’t last as long as a MLB season. Only can only wish.

-As for RHOBH, looks like they’re cut cut some cast members next season. Awwwww, what a shame. I mean, how are they ever going to find more snobby, rich, uppity plastic women to have fake fights with each other and trash one another to the media? I can’t imagine where they’ll find any more of those. Good luck to them.

-The Biebs has decided to shut down the meet and greets at his concerts because he’s getting too depressed. I think I’m depressed just knowing he charges fans $2k to get a picture with him and shake his hand. I know celebrities live in a completely different world than that the rest of us, but I’m sorry, this story is ridiculous. Suck it up, Biebs.

-Taylor Kitsch will be directing, writing, and starring and indie film called “Pieces.” That’s great and all, but unless he’s getting in racial fights with Smash, or winning state titles with Saracen, I can’t say I’m all that interested. I thought I would be sold on him in “True Detective 2,” and even that kinda bored me. He’s Tim Riggins and will forever be Tim Riggins. Sorry, T.

-The boys in Hanson want to let everyone know that we’ve been singing “MMMbop” wrong all these years. Ummmmm, no we haven’t since the only thing anyone ever sings from that song is those six letters. No one knows, or probably cares, about the rest of the lyrics. If you see anyone attempt this song at karaoke, you have my permission to walk up on stage and beat them with the microphone.

-A Rod is now dating Anne Wojcicki. I have no idea who she is other than what the story says, but she certainly doesn’t look like A Rod’s past conquests. Then again, the person A Rod is in love with more than anyone else in the world is A Rod, so, have fun Anne. I’m sure you’ll enjoy the hell out of this relationship.

-Bethenny Frankel no longer has to pay her ex Jason Hoppy $12,000 a month in spousal support. So this guy was making $144k a year just because he was the ex-husband of someone who made it rich without his help? Seems fair. He deserves about $.12 a month if you ask me.

-Nick Cannon is turning into the male Taylor Swift as he released a new rap song pretty much dissing Mariah. I mean, who else could he be talking about in those lyrics? A girl he dated in high school? My guess would be no. I think the better question to ask at this point is who is a better singer, Nick or Mariah?

-Hilary Swank found herself a new man as she just got engaged to boyfriend Ruben Torres. This upsets me. I mean, whatever happened with her and Steve Saunders? I know she had a kid and all, but they couldn’t have made that work? You know, with her waitressing at the Peach Pit and Steve making $8/hr at the “Beverly Beat.” Shame on these two for giving up so soon. Booooooooooooo.

-Channing Tatum and Jenna Dewan Tatum are bringing a new dance show to NBC. I have no idea how good this will be, nor will I probably watch, however after seeing these two blow the roof off “Lip Sync Battle,” I’d probably attach their name to anything as well. In case you missed it, here were their legendary performances: