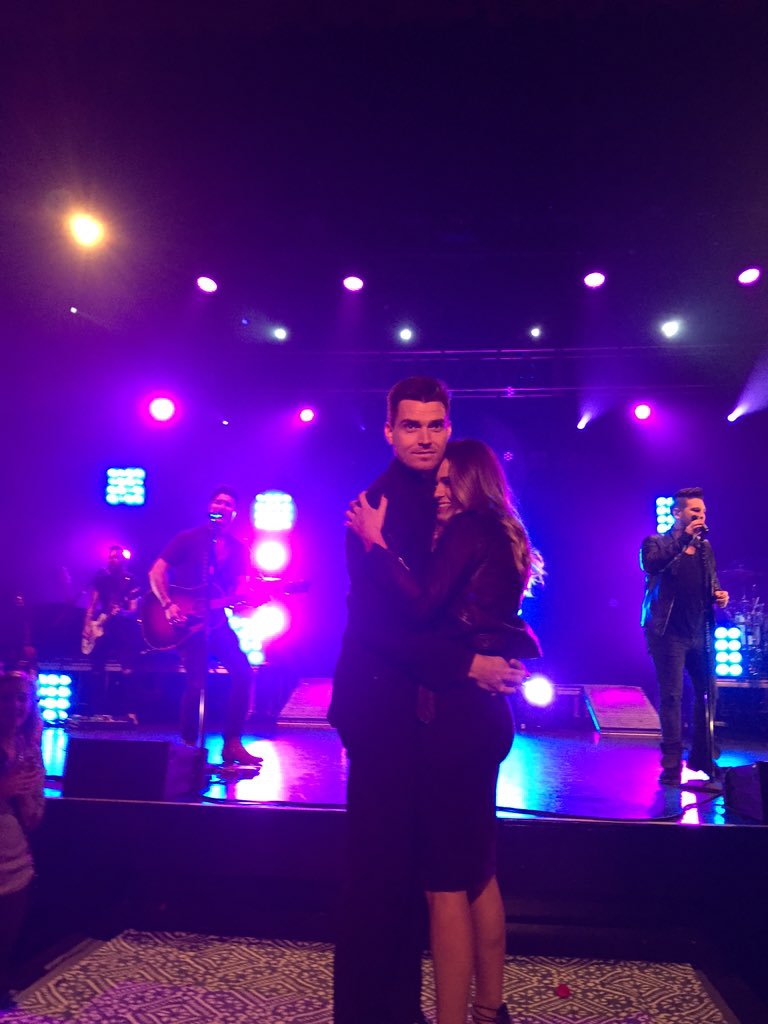 No surprise that last night’s 1-on-1 date was all over social media. If you were following on Twitter late last night, you saw me post numerous pictures and four videos of JoJo and her date arriving at the Palace in Greensburg, PA for a public concert with artists Dan + Shay. Today is a group date at Heinz Field in Pittsburgh. Follow along on Twitter as I’ll hopefully be updating any info I get about the date during the day. I don’t expect any pics from that date since it’s closed to the public, but maybe the group date after party is somewhere where they can be seen. Tomorrow will be a 1-on-1 with the rose ceremony Thursday. With me heading to Vegas tomorrow morning through Sunday, not sure how much I’ll be able to retweet anything, but if I get any info, I’ll most certainly try to tweet it out. With Thursday being a rose ceremony and Friday a travel day, there won’t be anything to update those days, so that’s good. Won’t cut into my pool/gambling time. Tomorrow might be the only day I miss anything. All depends on what is seen and any info I get. I’ll be checking my phone periodically tomorrow, but much less than I do on a normal day when I’m home. So we’ll play it by ear.

Lets get to a couple things first regarding JoJo’s season that you can add to your spoilers. It’s been updated on the JoJo’s Guys page, but one of the five original guys that I posted back on March 15th, Paul Tappon, is not a contestant on JoJo’s season. He was flown out to LA, was set to be on the show up until the last minute, when apparently it was found out there was a relative of his who once worked on the show, so he never ended up making the final cut. A quick google search shows that a Drew Tappon was a Production Executive on the “Bachelorette” back in 2010. Possible that’s the link. He’s actually the Senior VP of Reality Development and Programming at A&E. At least he was back in 2014. Maybe he still is. I heard that’s why Paul didn’t get end up getting cast, and this was found out very late in the process after he’d already been flown out to LA, so this looks to be the link, but I’m not 100% sure. Seems like it is. I mean, same last name and all. I don’t know the relation.

Also, as I told you two weeks ago they were headed to Nemacolin, I’ve gotten confirmation on two other locations they are headed this season. I just don’t know when, and which one comes first. Two places that I’m sure they are headed this season are Uruguay and Thailand. Uruguay would be a first. They’ve never been there. Thailand they’ve actually been to twice already. They did episodes 4 & 5 of Ashley’s season in Thailand, and Sean’s overnight dates and final rose ceremony were there. Those are two I’m sure they are headed to at some point after PA, I just don’t know when.

Remember back a couple seasons ago I was told that production put in a bid to have the overnight dates and final rose ceremony in Australia, but that hotel chain actually turned them down for whatever reason. So I didn’t know that it meant they’d try a different location within the same country, or they’d just go completely somewhere else. Since they’ve never been to Australia, it obviously meant they went somewhere else. Well, I can tell you this season that a bid was put in this season to shoot in Ecuador, but that particular location didn’t take the offer. So I wouldn’t completely rule them out because they did try to go there, but that particular location couldn’t accommodate them. I’m just not sure if that means they won’t go there at all. I guess we’ll see.

As for last night, JoJo and her date Luke showed up for the Dan + Shay concert at around 11:45pm local time, a good 2 hrs and 45 minutes after they let people in the venue. Here’s one onlooker’s account of the night:

“We waited over an hour in the cold and rain to finally get in at 9pm. Jojo and Luke did not arrive until after 11:45pm so we sat and got to listen to a mini set by Dan + Shay (one of them is from the area) then sat & waited some more. One of the producers kept having us practice for when JoJo would arrive cheering and yelling-they kept telling us she was minutes away. They also said she did not have any idea what she was doing at the theatre so it was a big surprise for her-who knows if that was really true. Jojo finally arrived and they made the big production of her and Luke getting up on a mini stage set up in front of the band. The entire time it was super awkward- watching them somewhat swaying to the music and making out. His rose kept falling off and Jojo kept putting it back on. They did let her talk to us and she told us his name and that she liked Pittsburgh and had a really great date that day.”

So there you go. Nothing too different than what we’ve heard from people who’ve been in attendance at these things in the past. They make you sit around forever and they have you “practice” cheering because, you know, that’s so hard to do.

Below are the pictures and videos from last night’s date I posted last night. As for Luke, I will reveal him at a later date UPDATE: Fine, I caved. I added him at the end. For the time being, on the next page, there are more guys you can add to the list of guys you will see on JoJo’s season…

(SPOILER): More pics as they gaze into each other's eyes… pic.twitter.com/jgSIDVpWf9

(SPOILER): Aaaaannnnd the date's over. Drive home safely. Thanks for waiting 4 hrs to watch them for 10 minutes… pic.twitter.com/HKxZct1MuC

(SPOILER): Video of JoJo and Luke arriving then kissing… pic.twitter.com/2MHHY9eoEA