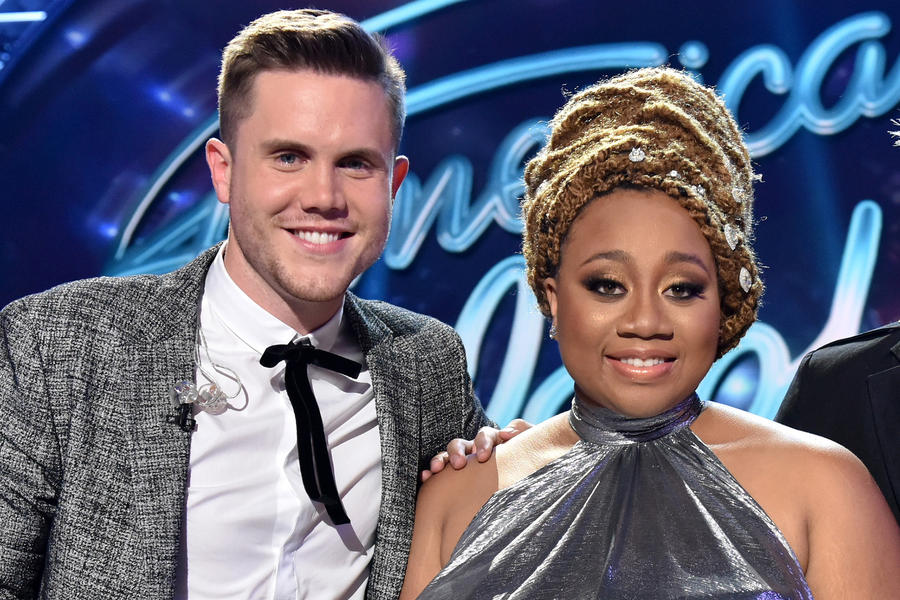 The good thing about the Idol finale last night is that they didn’t focus at all on this season. Outside of a few short spots here and there, it was mostly a reunion show. Which was good for the most part, very nostaglic, although a couple head scratchers in there (more on that later). Was I surprised that Trent won? Yes. I get this is a popularity contest but listening to the judges all season gush over La’Porsha, I just figured she was a shoe in. Apparently not. So I guess we’re stuck with Trent’s over exaggerated facial expressions for years to come. He’s ok, not necessarily my cup of tea, but I get he has a fan base. However, no winner of this show has sold sh** in the music industry since Phillip Phillips, so good luck to Trent. This isn’t gonna be easy. Overall I liked the finale, I’m glad Simon found time in his schedule to make an appearance, even though we all knew he would, and William Hung’s “She Bangs” rendition was just as awesome this time around as it was the previous 100 times I’d seen it. When is he going on tour? Can he open for Taylor next time? I think that could really be a duet I’d shell out gobs of money to see. Hey, a man can dream can’t he?

-Yesterday I gave you Bustle’s review of Emily’s book, and now today Andi is talking about some of the things you should expect to see when her book gets released in May. I guess it’s gonna be a look inside her journal when she was dating Josh and others. The good thing is she readily admits it’s gonna show some of her crazy side, so at least we know it won’t be some one-sided rip job on every guy she dated. Maybe this one will be worth actually reading.

-This is a fascinating read about the editor of the National Enquirer who broke the Charlie Sheen HIV story. It’s long, but if you have 10-15 minutes, I highly suggest you read how detailed and thorough this reporter was and how much he found out about Charlie before running with the story. Really, really good read. Check it out. And yes, apparently Charlie likes orally pleasuring men according to this reporter who saw it first hand. Oh boy.

-With the Idol finale in the books, EW.com looked back on some of Idol’s top performances over the years. Granted, this is all subjective, and it looked like they tried to keep it to one per performer. Some I agree with and some I don’t. Also, they did an
interview with Adam Lambert regarding his journey on the show. He’s been a guest judge in the past and has helped out a lot, so I was a little surprised he wasn’t at the finale, but something tells me he had a prior engagement.

-And speaking of the finale, the Hollywood Reporter had their critique, which was mostly positive. The thing I agree with the most in this was just the random pairings they had with some of the former contestants. Not to mention, they really chose some randoms from the past to come back and sing. And, ummmmm, some of them were unnoticeable.

-The sister of Ron Goldman, Kim, took some heat on social media for giving out OJ’s address in prison. Did she need to do that? No. But am I missing something or what’s wrong with that? It’s not like she gave out his private home address. And it’s not like someone can do anything to him. He’s in prison. If someone really wants to go out of their way and write a scathing letter to OJ, well, they should thank Kim because now they know where to send it.

-Eliminated “Survivor” contestant Nick spoke to the media yesterday regarding his boot from the show, and why Thai ended up voting for Jason. Apparently Thai was left out of the loop on some things. Not to mention, he kinda ran his mouth at Tribal that may come back to haunt him.

-One of my all time favorite movies from the 80’s the “Breakfast Club” had an iconic performance from one Judd Nelson. Here’s what Judd looks like now. Oh boy. Someone might want to check on him. I don’t know if going with the Unabomber look is something he really should be striving for. What’s he even doing now? Or for the last 10 years?

-If I said the name “Joseph Baena” to you, would it ring a bell? Probably not. However, if you click on this link you’ll realize he’s the love child of Arnold Schwarzenegger and the maid he was banging behind Maria Shriver’s back. Uhhhhh, yeah. I’d say that’s Arnold’s kid all right. Usually Hollywood celebs bang the hot nanny. Not Arnold. He went after the maid who, for lack of a better phrase, wasn’t hot.

-I don’t watch “Kendra on Top” (which is about as appropriately titled as you can get since Kendra is basically famous for being on top), so when I hear any news regarding that show, I figure it must be super important. Like Kendra being worried her mother’s tell all book is hurting her image. Really? That’s what’s hurting your image? Not the fact that your husband likes having relations with transsexuals behind your back and you choose to stay with him? Got it.

-Anne Hathaway gave birth to a baby boy named Jonathan yesterday. At one day old, Jonathan now has become the most insufferable 1 day old in the world. Sorry Jonathan. Guilt by association.

-Ooooohhhhh, more reality TV mom nonsense today. Now Courtney Stodden is all up in arms that her mother once told her then perv husband, Doug Hutchinson, that she was in love with him. Courtney is very bothered by this and doesn’t think a mom should ever do that. You’re right. Nor should a mom ever let her 16 year old daughter out of the house looking the way you did, but you didn’t seem to have a problem with that.

-Khloe is ignoring Rob’s engagement to Blac Chyna because of course she is. She knows it’ll work out about as well as Kim’s marriage to Kris Humphries. You know your family doesn’t give a sh** about your engagement when you propose to your girlfriend while the rest of them are on vacation. And as far as I know, not many of them have sent any congratulations either. Good luck to Rob and Blac. Did you see once they’re married she’s going to legally change her name to Angela Kardashian? Ha ha yeah right. There’s no chance in hell the Kardashian empire is going to allow that to happen. Sorry Angela. You might wanna choose a new name.

-A fascinating story here. You know if I’m bringing up women’s college basketball, it must be because of some scandal. Well, it is. Tyler Summit, the son of legendary women’s coach Pat Summit, resigned yesterday as head coach from La Tech University because of an “inappropriate relationship” he was having outside his marriage. Translation: He was banging one of his players. And to boot, reports are he got her pregnant. Yeah, I’d say that’s reason enough to step down. Good luck ever coaching again, Ty.