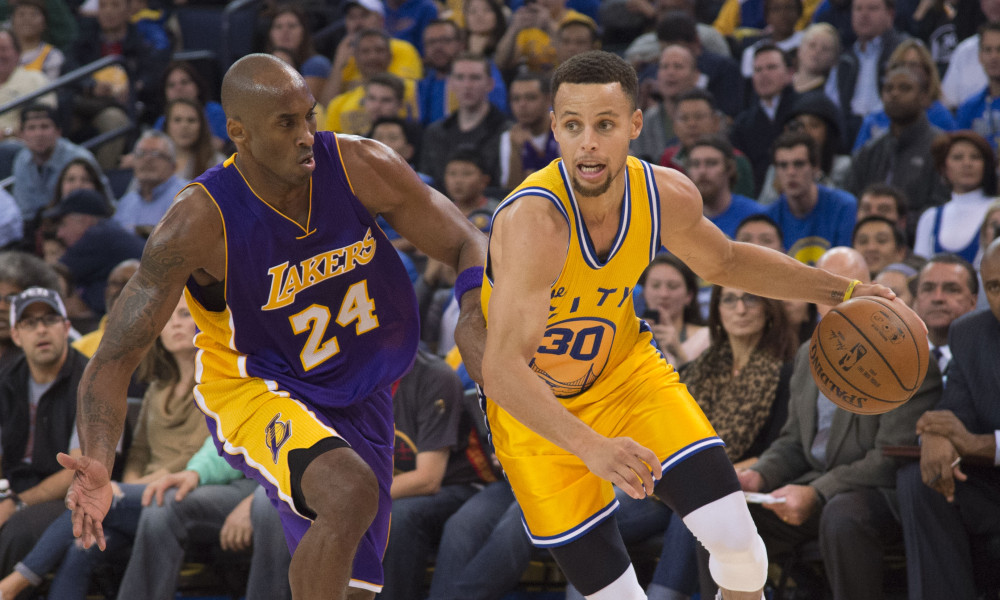 If I’ve said it once, I’ve said it 1,000 times: Sports is the best reality TV going. If you’re an NBA fan, last night was awesome. Even if you don’t have a rooting interest in either team, or hell, even if you hate Kobe, last night was fun to watch. Who cares if it was a meaningless game between a 16 win team and a team already eliminated from the playoffs. Did anyone expect THAT last night? I sure didn’t. We knew he’d play most of the game, and we knew he’d be gunning the whole time he was in there, but 60???!!! 60???!!! That’s just ridiculous. I don’t care if it took him 50 shots to do it, it’s still asinine considering it’s his last game, he’s 38 years old or whatever, and the Lakers were down 10 with 3:00 minutes left before Kobe took it upon himself to score 13 in a row and put the game away. Very fun to watch. And oh yeah, Steph Curry ho-hummed his way to 10 three pointers and finished the season with 402. So 73 wins, 400 three pointers, undoubtedly will win his second consecutive MVP, finished the season averaging 30 pts, 7 assists, and 5 rebounds a game, and also only became only the second player in history to finish a season in the 50-45-90 club – 50% FG shooting, 45% from 3 pt range, and 90% from the line. Dumb. Just dumb. And broke his own 3 point record in a season by 116.

Since there were no “Daily Links” yesterday, most of these stories were from Tuesday.

-If you like mini “Survivor” spoilers, here’s one for you: there was a cast leak for season 34 of returnees who are being interviewed for that season, all returnees. Some good ones in there, and some head scratchers. Exactly why do we need Cirie a possible 4th time? And Ozzy? Looks like it will be another season though of all returnees, so get ready for that.

-Even though I told you this 10 months ago while they were off filming it, it became official the other day when Celebrity Marriage Boot Camp released their first preview of the season and Cody & Michelle are on it. I’ve gotten asked a lot “Don’t you have to be married to be on that show?” The answer is no. In fact, most of the people on it aren’t married. Some are, but a majority aren’t. It’s basically just a relationship counseling show. If you’re already married, it works on things to improve your marriage. If you’re in a relationship, it prepares you for marriage. Well, prepares you however a reality show with manufactured drama and the same couples exercises they do every season can.

-The new Spiderman movie has a new title, Spiderman: Homecoming.. Sweet. Does he ask Mary Jane to the dance in this movie? Oh wait, she’s dead. Or is this gonna be another prequel. I’ve completely lost track with these movies. I think this is the second reboot of the franchise since the original with Tobey McGuire. Hell I don’t know. I just know I’ll watch this sone.

-In other comic book movie news, Ben Affleck is getting his own standalone Batman movie. Considering how fired up I was for Batman vs Superman and have still yet to see it since I heard it sucked donkeys, I’m guessing I won’t be running about to see this one either. But hey, my feelings may change. Still a long ways to go. But gimmie the Star Wars movies first, then I’ll make a decision. Those I’m fired up for.

-Kirsten Dunst has split from her boyfriend of four years, Garrett Hedlund. Well, obviously! I mean, we all know who she’s after right?

Kirsten, I’ll let you order whatever you want from Macaroni Grill and lets call it a date. Deal?

-Not that any of us should be surprised, but Megan Fox confirmed that her third baby’s daddy is none other than David Silver. For all of those who corrected me after Tuesday’s story and told me, “No, Brian Austin Green is his name” – I know. All that shows me is you aren’t nearly the 90210 fan you should be. Brian Austin Green’s character’s name in 90210 is David Silver. And since that’s by far the biggest acting role he’s ever had or will ever have, he will always be David Silver. With that said, way to knock up your wife who you were separated from, D. He knew what he was doing.

-Kim Kardashian is inspiring women everywhere to take their clothes off and photo themselves. The latest? Brandi Glanville as she posted this photo on Instagram. Hey, I’m certainly not complaining, but lets not pretend it was Kim who inspired that. Brandi, that’s pretty much called “Thursday” for you. Or any day of the week for that matter. All I want to know is if Josh Murray hit that during the filming of their E! show coming up.

-Man, the more details I read about this woman who was murdered by her online boyfriend in Seattle, the crazier it gets. There are some sick people in this world, and this guy should be locked up for good. Who thinks to do something like this to someone they’ve barely been seeing for 2 months? Well, crazy, psychotics, lunatics for one. But geez. Awful story.

-I guess Lindsay Lohan is engaged to some Russian heir. Isn’t Lindsay not even living in US anymore? Whatever the case, I think this probably suits Lindsay best just to get away from Sunset Blvd. Johnny Manziel has taken over that mantle now of being the daily TMZ drunk who’ll give them a good story every day. I wonder if Lindsay had a ceremony where she officially passed the torch to Johnny or if she just does it in private? These are some of the things I’d like to know.

-Khloe is very happy to be on the cover of Shape magazine flaunting her body. Because it’s a way for her to tell the haters that the fat one is on the cover of a magazine. Of course the first thing she talks about is some sort of revenge on all people who doubted her. Doesn’t she have a show about that or something? And oh yeah, apparently she’s breaking up with Lamar – again. But this time it’s for real, guys. Seriously. Like, they’re done. Until they’re not.

-And finally, Kate Hudson went on a date with JJ Watt, and they snapchatted it. Are they 12? I didn’t know grown adults, especially A list celebs, felt the need to do this. Not sure how serious these two are or if it’ll even last, but one things for certain: Kate likes em’ young. First Nick Jonas, now JJ Watt? You do you, Kate. And make sure they’re fresh out of college while you’re at it. You know how people will now try and gain attention by asking some celebrity to prom with some cheesy video? I guarantee someone can rope Kate into this. Hell, she’ll probably offer herself to go to a HS prom considering her track record recently.