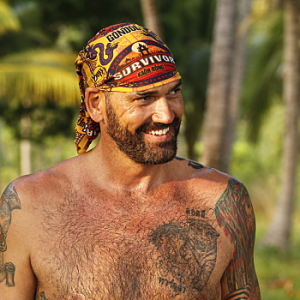 An epic episode of “Survivor” last night, which constantly goes to prove it’s basically impossible to ever predict what is going to happen on that show. When we ended last week, a three person alliance of Jason, Scot, and Tai were in control of the game with two idols versus an alliance of five. We’d never seen anything like it before. Then Tai goes and wins another advantage in the game last night to add another vote at Tribal whenever he chooses. Of course, once we started seeing ITM’s of Scot and Jason’s overconfidence, you could kinda see where last night’s Tribal was headed. Usually when they show someone being overconfident (not just in this show, but ANY reality show…cough…Olivia…cough), usually something opposite is about to happen. And that’s exactly what happened last night when Tai decided not to save Scot. Of course it was the right decision to make since Tai was a goner the next time he didn’t win immunity, and now Tai is controlling the game. Until, probably next week or something, where everyone gangs up on him. The game is too unpredictable on a week to week basis to ever say you know for sure what’s going to happen. And that’s why it’s still one of the best, if not the best reality show on television.

As for the “Bachelorette,” as mentioned yesterday, JoJo’s in Jacksonville today for her hometown date with Robby Hayes. Was told they will be dining at Aunt Kate’s in St. Augustine for the day portion of their date before meeting his parents at night. Stay tuned on Twitter as I may or not get pictures from Aunt Kate’s. We’ll see.

-Ok, I’m apparently a complete moron. “Three’s Company” was easily my favorite show as a kid growing up. I was under 10 when I started watching it, so obviously at the time a few of the jokes went over my head. Now they’re going to do a Three’s Company movie reboot. In reading this description, how did I not have any clue that Janet and Chrissy told Mr. Roper that Jack was gay so they’d let him live with them? I don’t think I ever knew that. Now looking back on it, I always remember Mr. Roper making faces at the camera or smirking when Jack did something he’d consider “gay.” This is a whole new revelation to me. I had no idea Mr. Roper thought he was gay because Chrissy and Janet told him he was. Crazy.

-Jennifer Aniston has been voted People Magazine World’s Most Beautiful Woman. I mean, is she attractive? Sure. But is she really the most beautiful woman in the world? Ummmm, no. And all the women on their list are attractive in their own way, but since beauty is so subjective, it’s impossible to really get a clear answer for this which is why it seems pointless. It’s an ego stroke, it’s done to appease certain people, keep people and management teams happy, etc. With that said, Nina Dobrev not being on that list is shocking. She’s absolutely moved into my top 5 now, a top 5 that I might add, probably has 15-20 women in it. Hey, it’s my list. I can make it as long as I want.

-The Miss USA Pageant is adding a 52nd contestant this season, that’s being voted on by the fans. Wait, this can be just anyone? Does it have to be a woman who’s competed in pageants before, or just any rando out there can sign up and get voted through? Seems like they’re really grasping at straws here for some attention. And if this 52nd person doesn’t even make the top 15, seems like it would be kind of pointless. I would think the ONLY reason they’d do this is to create interest, and if this woman gets the boot before top 15, wouldn’t seem to make sense. Of course people will stick around if they’re seeing contestant 52 making it farther and farther into the show.

-The Kiss Cam has become a staple at most every arena during baseball, basketball, and hockey games. Hell, I’ll be at the Mavericks game 3 tonight, but with my dad, so I don’t think we’ll be making it on the Kiss Cam. Usually it’s the couple on the Jumbotron that becomes the story, but not in this case. Nope, the girl behind the kissers hoovering two slices a pizza like it’s her last meal is probably dreading that now.

-This “Kelly and Michael” stuff sure is getting interesting isn’t it? You knew this wouldn’t just be a one day story. Depending on which story you want to believe, there seems to be friction. Kelly is livid that Michael didn’t tell her he was leaving, and basically boycotted the show the rest of the week. Oh sure, they’re masking it by saying Kelly and her husband had a pre-planned vacation that juuuuuuuuust happened to start the day after Michael announced his exit. Sure they didn’t. I have a feeling more will be coming out about these two in the coming days.

-Gwen Stefani and Gavin Rossdale’s divorce has been settled. The only issue I’m seemingly interested in is how much did that nanny get in all this? And didn’t we come to find out that she’s pregnant, but it’s NOT Gavin’s? Whatever happened with that? Shouldn’t she have delivered by now? Are we sure it’s not his? If I’m Gwen, I’m absolutely ordering a paternity test on that one. Too close to the situation to at least not check for sure.

-I feel like I wrote this exact same story a month ago, and I probably did. Because Leah Messer from “Teen Mom 2” blasted the show again for their editing. Which is truly comical. Blaming the show for how your edit comes across is about the most ignorant thing you can do nowadays on reality TV. What do you think they’re going to do? Show everything how it actually happened? Oh honey. You have a lot to learn.

-And finally, since Rob Kardashian seems to be going along so well with his new fiancé, he did what all guys in his position usually do – he bought her a nice gift. A Tiffany’s necklace? No. A diamond bracelet? Not quite. He just forked over $200k for a purple lamborghini. Yeah, that’s the way to her heart Rob. Hey Rob, you realize once she dumps your ass you can’t get that back, right? Clueless.