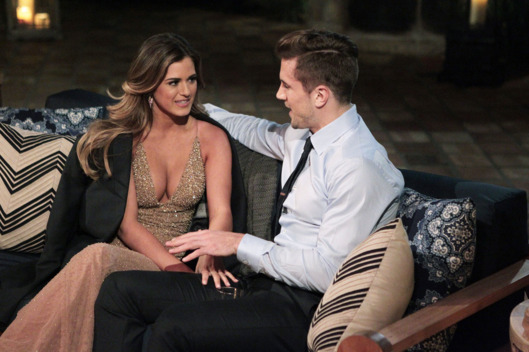 Not every guy did something to make an impression, but here were the ones that stood out to me:

–Jordan first out told her that his parents got engaged after only dating a few months and they’ve been married 36 years. Yeah, but that’s probably because social media wasn’t around in the 70’s. Maybe your dad had a long line of women waiting to throw him under the bus like what’s about to happen to you.

–Grant tells her “I’m not gonna do what Ben did to you last season. I’m not gonna fall in love with two girls.” Weeeellllll, I’m not so sure about that. It might actually be three girls. Seriously, I’m stunned at the amount of how many past ex’s are coming forward with nothing good to say about these guys.

–Robby brings a bottle of wine and wants to drink it “Fletcher style,” which is straight from the bottle. JoJo is down for that. Of course she is. Robby will probably need to get her hammered to have her believe the B.S. he’s selling this season.

–Will dropping his cue cards then saying “I am the most beautiful woman in the world” could’ve been funny, until now we know he likes humping blow up dolls.

–Nick B. and the Santa gimmick was just, ummmmm, well let me just say it…f***ing stupid. Did we really need him “JoJoJo-ing” all night? We got it. Once was enough.

–Sal got blue balled all right. Tried a play on words with his stress balls, but ended up being a metaphor for his night. You gets nothing and you will like it, Sal.

–Brandon said he doesn’t watch the show and didn’t know a thing about JoJo. Perfect. Because that’s exactly the type of guy I’m sure she’s looking for. Couple that with your greasy, stringy hair, I can’t imagine why you aren’t engaged to her.

–Wells bringing in All-4-One to sing “I Swear” was so disappointing. Really? Couldn’t come up with a better 90’s R&B group than that? I mean, I know Color Me Badd probably had a state fair they were performing at, but I think “I Wanna Sex You Up” would’ve worked way better on JoJo.
ol