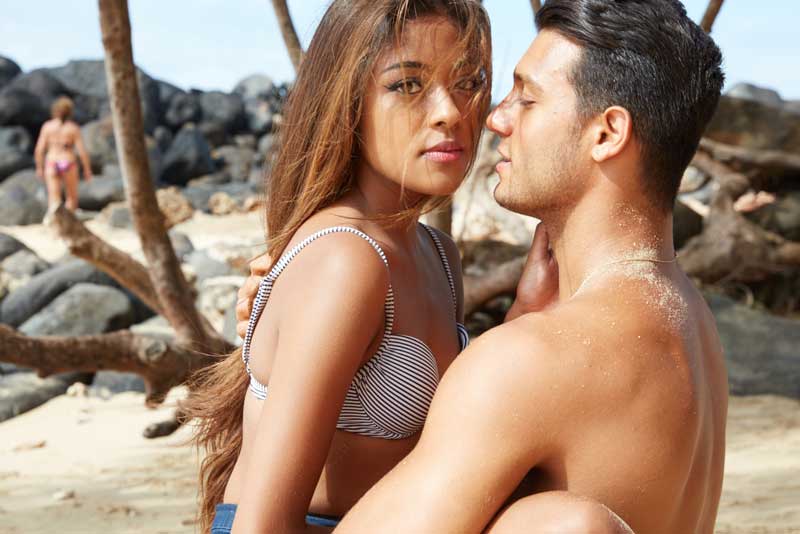 Like many of our favorite reality shows, Are You the One? comes with its own very specific vernacular – and since I hope you will wade into the waters of this show along with me this season to watch strangers who believe they will fall in everlasting love, I thought it might be helpful to lay out a little glossary and some background to help guide you through a series that’s about to enter its fourth season:

The concept first: Ten guys and ten girls are hoping to find their perfect matches while stuck on an island. If each person can locate his or her soulmate, the group will walk away with one million dollars. And yes, I know what you’re thinking: How can a bunch of people in their early twenties even know what they want, let alone suss out the person trapped on that island a group of experts decided was their ideal mate? I’m just going to go ahead and encourage you to view that as a rhetorical question so we can pretend that any of this will matter to anybody in the long run. Deal?

As for the procedure that will lead to permanent (or very temporary) romantic bliss, the group meets, sizes one another up, and then tries to figure out which person of the opposite sex was deigned by the heavens and the moon and the stars and MTV to be the perfect match. There will be ten attempts over six weeks for all of these people to link up correctly, but I’m getting ahead of myself here because we really need to talk lingo:

The Getaway Date: This is the name for the excursion two people go on after a challenge where they try to decide if they belong together for all of eternity. The tension is notched up when the asker of The Getaway Date chooses someone other than he or she was expected to, throwing the house into almost-immediate chaos. And for those of you unaccustomed to watching dating shows – especially those on MTV – “chaos” can be translated into meaning “total and complete emotional breakdowns often accompanied by the heaving of glass, the throwing of meaty punches, and torrents of salty tears.”

Lock In: During the ceremony that typically ends an episode, contestants have to guess their perfect match and both people shove their hands onto a screen to lock in a guess. After everyone locks in, great beams of light are what’s used to let us know how many matches were successfully figured out and the group needs at least one beam to avoid the blackout. I like to believe those beams come directly from God himself, but I have yet to corroborate such a thing.

Ah, The Blackout: The group as a whole loses money from that potential million dollar payout if no matches are discovered. All of that sounds terribly disappointing, but try to look on the bright side and remember that these contestants probably weren’t selected because of how well they handle adversity. We’re tuning in to watch shit go down and I’m pretty sure the reality of a blackout will bring about a mess of shit.

There’s also a Honeymoon Suite, where a couple gets to spend an evening. But before you can enter that Honeymoon Suite, you have to brave The Truth Booth, a pod-like white room where two people who are either praying to be confirmed as soulmates or are terrified such a pairing will be verified stand still while lasers and lights run up and down their bodies. Eventually, results pop up that reveal whether these two are indeed meant for one another. (Oh, and even if they are proven to be correct matches, I’d wait a while to buy the couple something off their registry. But when you feel ready to make that celebratory purchase, my guess is they will be registered at Spencer’s.)

Season four of Are You the One? premieres on MTV on June 13th – and I cannot wait. I love a good competition and I will undoubtedly find myself rooting for (and very much against) several of these contestants. I’ll be tuning in every Monday night to watch and my recaps will be up on this site every Tuesday. But until then, go outside and wait for your beam of light to shine down upon you! Oh – and please let me know if you find out for sure that it’s some deity doing all that shining.

Nell Kalter teaches Film and Media at a school in New York. She is the author of the books THAT YEAR and STUDENT, both available on amazon.com in paperback and for your Kindle. Also be sure to check out her website at nellkalter.com. Her twitter is @nell_kalter.

Are You the One? Episode 1 Recap
To Top