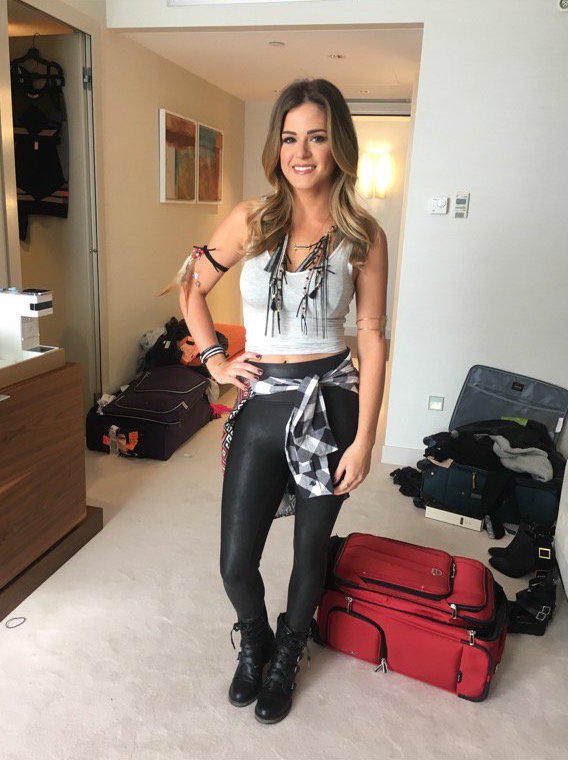 To say that yesterday’s column caused a bit of an uproar I guess would be an understatement. And of course with everything I write, it brings skepticism, which is fine. I get that. All I can do is tell you what I do pretty much every season. I vet out sources as much as I can and I give you the information provided me. I know who all those girls were who emailed me about Jordan, and Jordan sure as hell knows who they are, so that’s really all that matters. I didn’t make anything up, I wasn’t trying to incite a scandal, etc. All these people came to me first. I had a back and forth email conversation that lasted weeks with all of them. Even spoke on the phone to some. I don’t just post emails like that without thoroughly looking in to them and seeing how credible they are. Every one of them checked out. Now with that said, I know what I posted yesterday basically puts JoJo in a lose-lose situation. If she stays with him, she gets the “Ugh, he’s such a dog. Haven’t you read about this guy’s past and being back on Raya?” And if she immediately dumps him, it becomes “Why would you let the tabloids destroy your relationship? You should stand by your man.” Problem is, there’s no way this stuff won’t get brought up in their relationship. I’m sure she will bring it up, if she hasn’t already. And all Jordan has to do is continue to lie and she’s buying it. Sucks, wish it wasn’t that way, but as of now, that’s certainly what it looks like.

So US Weekly jumped into the fray with this week’s cover story and, as predicted, here comes about two months straight of negative JoJo stories on the cover of the magazine. Did you see this week’s cover story? This is all you’re going to see for the next 2 months. Never in the history of tabloid coverage will you ever see a headline that reads, “JoJo Happy and In Love! Everything is Going Great!” That doesn’t sell. So they will find every ex, high school classmate, former roommates, etc and dive into these guys’ pasts as much as they can. And most of it will be true.

Now, someone actually sent me over the story and in true US Weekly fashion, it’s void of any concrete information. While the on the surface saying that JoJo had a “chance encounter with one of Jordan’s exes, Brittany Farrar, last winter in Dallas and Brittany told her Jordan wasn’t a good boyfriend” – that’s all it says. Last winter? JoJo didn’t even know she was the “Bachelorette.” Nor did Jordan know he was gonna be on this show. There’s too many details missing from that little nugget. What they presented doesn’t make sense. Why would Brittany talk to JoJo about Jordan last winter? Seems like a reach after what Brittany posted on her IG the night of the premiere, and US is just trying to build a story off that. Look, I have no idea if JoJo met Brittany last winter in Dallas. But it seems highly unlikely to me. The story also just uses a bunch of quotes from JoJo from the beginning of the season when she spoke to the media, yet they intertwined it with stuff that’s currently happening on the show, which makes the whole thing confusing. But this is to be expected. This is how tabloids work. The bottom line is neither JoJo nor Jordan will directly acknowledge what was posted yesterday, or speak out on it, until the ATFR, and even then it’ll be more positioned as, “A lot of stuff has come out about your past Jordan, what do you have to say?” And then he’ll lie again because, ummmmmm, you really think he’s gonna sit there and say, “Yep. All true. You guys got me.” Of course not.

Moving on to “Bachelor in Paradise,” a lot of contestants are making it quite known on social media they are already back from filming. Chad, Leah, and Jubilee have all been active and posting pictures or snapping since they were announced as cast, so yes, they’re back home. Josh Murray isn’t in Mexico yet, but he will be. Ashley I. I believe got there this weekend. More and more casting and spoilers will be released in the coming weeks, but just wanted to catch everyone up on stuff who haven’t been following me on Twitter.

I think the “Bachelor” franchise has suddenly become the minor leagues for WE Tv’s “Celebrity Marriage Boot Camp.” Holy crap. So we had Ryan and Trista go on it. Then Sean and Catherine did it last season. The current season airing Friday nights has Michelle and Cody on it (even though this was filmed last July and they aren’t even a couple anymore). Well, I can now report to you that you’ll be seeing two more “Bachelor” franchise couples appearing on future seasons of that show. Remember a couple weeks ago when I reported Ashley and JP filmed “Couples Therapy” but then quickly retracted? Yeah, I had the wrong show. They filmed “Celebrity Marriage Boot Camp” in beginning of May. CMBC films two seasons back-to-back. In April they filmed a season that Tanner and Jade went on. I’ve already been emailed by people questioning this that the two main counselors, Jim and Elizabeth Carroll, were tweeting from Texas during that time so filming couldn’t have happened. It did. For season 8 (the one Tanner and Jade are on), they switched up the counselors. So there’s your answer. Ashley & JP will be on season 9. Last year, Sean & Catherine’s season taped in June of 2015, and ran from Dec 2015 through February 2016. Cody and Michelle’s season taped last July, and is airing from now until August. I’m guessing we’ll see something of the same schedule for Tanner & Jade’s (season 8) and Ashley & JP’s (season 9).

Don’t forget to get your “Dr. Reality Steve” emails in for tomorrow. Right now, I have three. Not nearly enough. Lets see if we can get 5 more in today so we can enjoy a full set of emails tomorrow.