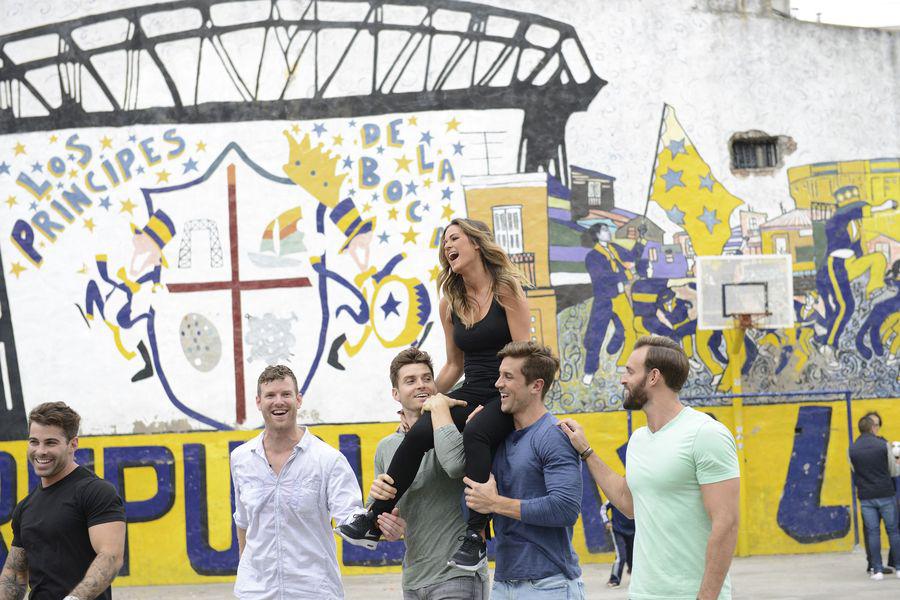 -Time for our second 2-on-1 date of the season. It’s Chase. It’s Derek. It’s a fight to the death. Man, when you put two guys with such explosive personalities together, you never know what you’re gonna get. And by “explosive personalities” I mean “watching two of the most emotionless, boring guys in the house battle it out for a girl they’ll never end up with in the end.” But here we go anyway, and frankly, not a whole hell of a lot happened on this date. They met with a tango teacher to learn, well, how to tango. And lets just say that I don’t think Len Goodman would’ve been too complimentary of this dance. I mean, maybe the date would’ve been more interesting if they had to actually perform this in front of people? But to just practice it with no ramifications whatsoever? Yeah, this date sucked. It accomplished nothing. On a 2-on-1, we really don’t care what they do during the day anyway. Just get to the good stuff. I mean, remember Chad & Alex’s date? They walked through the woods before she talked with both of them separately. Just lame.

-Over dinner, JoJo pulls both guys aside to talk. Derek is first and he tells her when they were dancing, he felt the passion. JoJo: “I saw the Derek that I saw on our first 1-on-1. You did kinda fall back a little bit after that.” That should’ve been Derek’s first sign that JoJo wasn’t feeling him anymore. But of course, one would follow that up with what Derek did. “From Day 1 when I looked in your eyes, I was like psssshhhh…I’m absolutely falling for you…felt that all day today.” Interesting. I wonder if she felt it up against her thigh when you guys were doing the tango. That’s now 3 guys in the last 2 episodes that have mentioned “falling” for JoJo. To recap, we have:

Lets go to the scorecard. Judges? “Robby 1st, Jordan 2nd, Derek a distant 3rd.” Robby was telling JoJo he was already in love with her. Jordan was telling her he’s getting there. Derek? Well, he didn’t even mention the word love. And that late in the game, “falling for you” just isn’t gonna cut it. Gotta be more serious than that. Sorry pal.

-Chase’s turn and JoJo is practically begging him to tell her he actually likes her. “I told you how I felt last week and I didn’t feel like you gave me much back…I struggled with not knowing where you stand.” Ouch. Translation: Look dude, just at least pretend in this moment you want me. We have to show the cameras a reason for me picking you over Derek. He told me he’s falling for me, and you’re sitting there stumbling all over your words and when you do speak, it sounds like you have a bag of marbles in your mouth. Cut to an ITM of Chase that I don’t think close caption can even pick up properly. “I didn’t know JoJo felt like she liked me more than I liked her.” Yeah, that’s never a good sign. So go back in there and redeem yourself before it’s too late and she picks the guy just as boring as you. Chase to JoJo: “I came here for a reason, and that reason was you.” Very original line Chase. I believe Hoobastank beat you to that:

-So she gives Chase the rose over Derek, Derek gets into the car crying, all while Soledad Pastorutti serenades Chase & JoJo to “Don’t Cry For Me Argentina” in the most meta thing this show has done this season. Derek is even trying not to cry, but can’t help himself. “Why am I crying?” Probably because you just realized how many more Instagram followers some of the other guys are gonna get now that you finished 7th. That’s a starting point. The whole date they were showing us how overconfident Derek was on getting a rose from JoJo, so usually that spells doom. Ask Olivia how that worked out for her last season.

-Lets just go right to the rose ceremony while Derek is still crying in the car, shall we? She gets some alone time with Jordan at the cocktail party and Jordan reiterates again, “I wanna be in love and engaged at the end of this. I think we can get there” to which JoJo practically climaxes to. I think. Don’t you think it’s just odd to have a contestant say during filming “I want to be engaged at the end of this.” Like they’re breaking the 4th wall and knowing that’s what the “prize” is and letting people know that’s their goal. The more they say that, the less I believe them. I mean, I’m sure that’s what he wants, but clearly not for the reasons JoJo wants. Or maybe she does. I don’t have any clue what JoJo’s intentions are in all this. Of course she’s gonna say all the right things in interviews about wanting to be in love and find the right guy, but it’s just too impossible to believe anyone anymore when it comes to this show because they all are out to promote themselves and try and cash in on what little fame this show gives them. So maybe these two are a perfect couple to use each other for endorsements for a while and be done with it. Who knows at this point? I know you might think it’s harsh, but I’m telling you, that’s what this show has turned into. These contestants are all out for a cash grab and are willing to do whatever it takes to get it.

-Alex’s turn to chime in on where he stands. There’s 4 guys who don’t have roses and three (for now) roses to give out. Alex feels he should be one of those three. He gets his time with JoJo and says, “I’m right here. I’m waiting.” Then they kiss. Did he and Chase decide this episode that they were going to steal cheesy lines from love ballads in the 80’s and 90’s. You’re right here waiting, are you Alex? Funny. Because Richard Marx was too about 30 years ago:

Nice hair in the video Richard. Actually kinda looked like Alex’s in a few of his ITM’s when it wasn’t styled.

-Rose ceremony time. Luke and Chase already safe with roses. Oh yeah, Luke got his on the group date. Can’t even remember if I mentioned that. Anyway, JoJo speaks: “I told myself to trust my gut…following my heart…hasn’t made the goodbyes easier….a lot harder…hardest decision I’ve had to make…you know, giving out two pity roses tonight really was the way to go. I want to thank the producers for telling me that’s what I’m gonna do this episode…

Robby: I think Robby is allergic to socks. He never seems to wear them with anything.
Jordan: I wish he would’ve quoted a 90’s song last night. Maybe “O.P.P.?” Yeah you know me.

“JoJo, gentleman, this is the final rose tonight. When you’re ready. I’ve already been in this episode like three times already and it’s about to be a fourth. Y’all better back the f**k up off me. Daddy Harrison finally making himself known this season.”

JoJo excuses herself in dramatic fashion making you think she’s not gonna give the final rose to either Alex or James. But of course, as mentioned last week, we knew all 6 of these guys were in next week’s episode, so the tease was just for drama and a stay of execution for both of them. And Alex sees right through it. “We both essentially got pity roses.” Yes you did. Smart man, Alex. At least you could see what was happening. Doofus James thinks this means JoJo is in love with him or something and couldn’t be more happy he got a rose. Oh James. So much you need to learn.