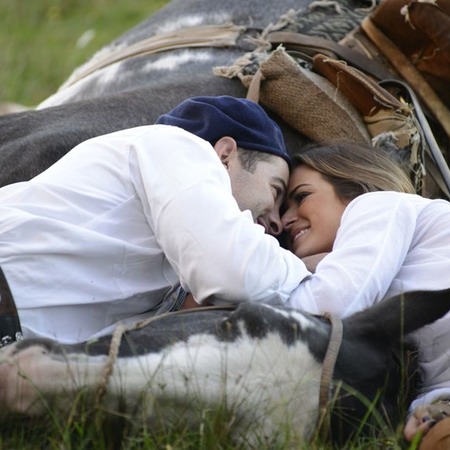 -We start off after the last rose ceremony in Argentina. I know it’s only been two weeks but it seems like two months. Who is this JoJo girl that everyone speaks of? Who are these six guys? What is happening right now? Amazing that this season has done this well in the ratings this year considering they had two weeks where they had no episode. Not that I didn’t think JoJo would have good ratings but just that things feel so disjointed when they have to take two weeks off of running nothing. But whatever the case, our lead’s name is JoJo and she has 6 guys who are still competing for her. Four of them look alike. Then you have a dwarf and a country bumpkin as the other two who were spared last week only to be eliminated this week. I mean, you didn’t even need to know the spoilers to know who was going home this week. Like Alex stood a chance. Or maybe I should say, like Alex stood a chance even standing on a mini ladder.

-This week there will be three 1-on-1 dates and a group date. No roses will be given out on the 1-on-1’s, but there will be one on the group date, which means that lucky individual will be getting a hometown – because we couldn’t have possibly figured that out on our own. The first date will begin immediately as that guy will drive with JoJo to the Argentina countryside. Kinda like how Jared got to drive with Kaitlyn in Ireland last season while the other guys took different transportation. The only difference being that Kaitlyn liked Jared about 1 billion times more than JoJo is into Alex. Does JoJo even know anything about Alex? Like, his name? Or if he wears lifts in his shoes like Jake Pavelka to barely be taller than her? These are questions I want answers to dammit.

-So as they’re driving to the countryside, we see what JoJo would be like on a road trip. She wants flaming hot Doritos and Pringles. And a little small dude she can fit in her pocket. While these two are on their way there, the other 5 guys get to take a rickety old bus and make up lame rap songs about Alex. Enough already with the songs this year guys. The rapping, the group singing, it’s tired. Not to mention your songs suck. Since once the final four rolls around the guys are separated and never see each other until the rose ceremonies, thankfully this looks to be our last group rapping song forever and ever. Until the MTA this weekend when I’m sure they’ll whip us up some doozy that’ll make Jay Z look like Coolio. Lets hope that doesn’t happen because we could really use less untalented rapping in our lives. We’re supposed to be making this a better country. This will make it worse.

-If it wasn’t bad enough that JoJo knew even last episode that Alex had zero chance at getting a hometown date, she takes it to a whole other level by making him dress like an Argentinian Gaucho. Or as I like to call it, a Frenchman who stole Jerry Seinfeld’s pirate shirt. What the hell was that? That was a gaucho? Looked like he should be painting the Mona Lisa with his monacle and palette. These two went horse back riding and needless to say, Alex looked like he was sitting in that big boy chair again when he was on top of the horse. It was quite embarrassing. Then the real gaucho guy somehow drugged the horse by whisperin in his ear and got him to lay down. Did anyone else find Mr. Horse Whisperer rather creepy? Like, he got the horse on the ground, was fiddling with his legs, started spooning him, then asked Alex and JoJo to join. Huh? I believe there are certain websites where you have to pay to watch horse love. No thanks. This shouldn’t be shown on network TV before 8:00pm, I’m sorry.

-Now lets get to the night portion of this date where it gets really good. And by “really good” I mean “the part that JoJo has been waiting for since the last rose ceremony.” Alex is complimenting the f**k out of JoJo today and she seems to care about as much the rest of us do. Alex: “I’ve never felt so willing to fall in love with someone.” JoJo: “I saw a side of Alex today that made me smile.” Translation: It’s always good to throw in a few nice words before you drop a guy on his ass. Producers told me so. She then asks him who she’d meet if God forbid he got a hometown date. You know, like if Robby, Jordan, Luke, and Chase were all struck by lightning and couldn’t continue with the show. And even then, she probably would’ve called back dudes from the first night before giving Alex a hometown I’m sure. He says she’d meet his mom, brother, sister-in-law, and grandma. Well, at least they got a shout out on the show tonight since there was a better chance of Luke or Chase cracking a smile than of Alex’s family appearing next week.

-Alex must know he’s light years behind everyone else and JoJo would rather make out with a wine bottle Soraya style then spend another minute with this troll. So when you’re behind, what do you do? What producers tell you you need to do. And that’s express your love to JoJo. Alex: “I need you to know…I think I’m falling in love with you. I know I’m falling in love with you.” Yes, he said those exact two sentences back-to-back without pause. Don’t ask me how that was possible, but he did. So which one is it? You think you are, or you are? Not that it mattered since, well, JoJo couldn’t believe what she was hearing. “When you told me you were falling in love with me, I don’t feel as excited as I should feel.” Ouch. Dagger. Alex, take your pirate shirt and stupid beret and leave this show now. Just get ready for Saturday when you inevitably spend all your time humping Chad’s leg trying to rile him up. That’s what you’re good at. Winning JoJo’s heart and wanting intercourse with her? Not so much. Nice try though. See you on Paradise in the summer of 2017.