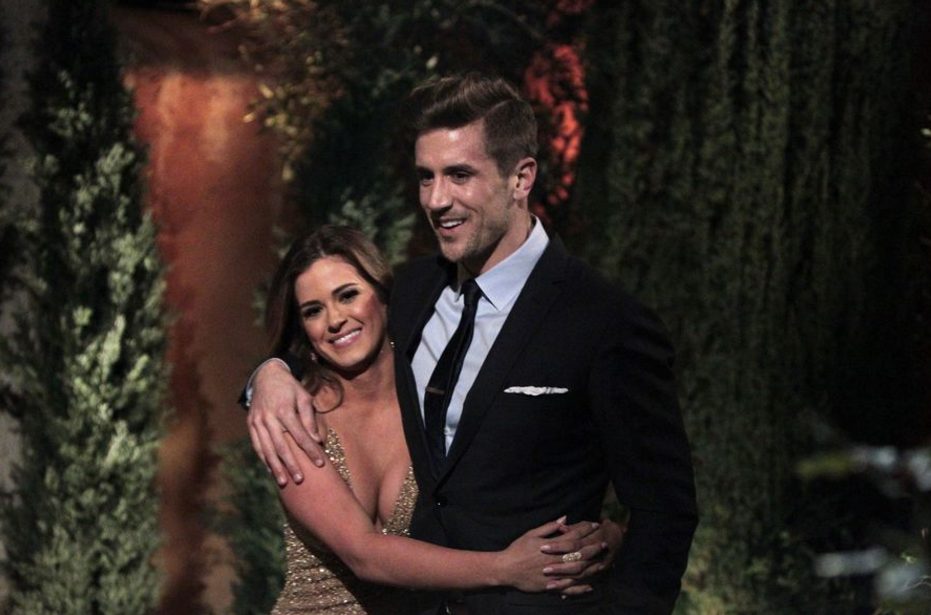 So yesterday I gave you an update on what to expect in next week’s episode. When we pick up the episode, JoJo is wailing away after Luke tells her he loves her. Well, that was done for dramatic purposes since she ends up still sending him home anyway, paving his storyline to be the “Bachelor” next season from everything I’m hearing. I also informed you that on the overnight dates, Chase and JoJo do go back to the fantasy suite, but while there, JoJo basically says she’s not feeling like she should, and she lets Chase go before they spend the night together. They don’t end on good terms. Basically she’s upset and telling him essentially she didn’t mean to hurt him and that’s not her intention and he comes back with, “But that’s exactly what you did.” So when he leaves, he isn’t happy. But that isn’t the last we see of him. At the rose ceremony, Chase shows back up…but not to ask for a second chance. He comes back to apologize to JoJo for how he reacted and to clear the air. He apologizes, they’re fine, he leaves, and Robby and Jordan get the two roses at the rose ceremony. So expect to see that on Monday night’s rose ceremony.

A reader sent this in from this past Monday night where James Taylor and Robby were doing a watch party appearance at a bar in Atlanta. According to this reader, James was basically horning it up with a ton of women there, then decided to get on the mic and have verbal diarrhea. I’d say he was pretty drunk, but you can decide for yourself:

Get your “Dr. Reality Steve” emails in for tomorrow, as we’re at three right now. Want to get to at least six. So be sure to email today to have those answered for tomorrow.

Pretty much now maxed out on the party next Friday night in Las Vegas. All the invitations have pretty much been filled, but there are still a few of you who have inquired that I emailed back and have yet to hear back from. If you were/are interested in coming, and you can show proof of a flight itinerary and/or hotel room reservation, you are in. For these last few spots, it’s whoever responds back ASAP showing they will definitely be there. Looks like we might be exceeding 60 people this year and that’s where I have to cap it.

Ok, lets get to your “Men Tell All” spoilers. As is the case every season, there really isn’t a whole hell of a lot to report from these shows. It’s the most edited show of the season, they fake the fan reactions, they purposely tell contestants before the show what to say, and it’s usually a whole lot of nothing. But here’s what I can tell you about MTA that will air next Tuesday, the 26th:

-There are four guys that get brought up in the hot seat: Wells, Chad, Luke, and Chase.

-Wells basically talks about the kiss he had with JoJo and everything that surrounded that weird date.

-Chad actually wasn’t out there when they introduced all the guys on stage. He was kept backstage until he was brought out to the hot seat. After that, he stayed on stage with everyone else.

-Chad obviously is a major storyline, and a lot of guys go after him for the things he did this season. I believe at some point Chad went after Grant for all his ex-girlfriend drama, but who knows if that’ll be shown, since nothing about Grant’s exes appeared anywhere on the show – just on this site. So I’d be surprised if that made the final cut. But guys like Alex, Christian, Chase, and a few others definitely go after Chad and Chad does Chad. Which apparently he’s telling everyone behind the scenes is just an act, and he’s loving the attention he’s getting from it. I get that people go on this show to play a particular character and exaggerate it to the 100th degree, but when the character you’re playing is a vile, reprehensible douchenozzle that nobody likes, you do realize how quickly no one will care about you right? Oh well.

-There is talk amongst the guys about the “Garden Guys,” those are guys that roomed together wherever they went – Jordan, Robby, Alex, and Chase. Can’t remember if Luke was part of it, but those guys (even though Jordan and Robby weren’t there to fend for themselves) took some heat from the other guys because they alienated themselves in the house.

-Alex is attacked for the way he acted this season. Nick Benvenutti particularly attacks him basically saying if Chad wasn’t on the show, Alex would’ve been the villain. And Alex doesn’t like being attacked as we know, so there’s a little drama there with guys calling him out.

-There’s also talk amongst the guys about Derek’s “validation” group date rose that he got in Uruguay. Some of the guys took issue with him for that.

-Vinny’s mom is in the audience and actually asks a question or defends her son. Something like that. Basically saying he’s a great guy and JoJo missed out. Uhhhh, ok mom. Sit down.

-JoJo comes out and addresses the guys. Obviously the two most want to hear from are Luke and Chase being the most recently eliminated. Luke reiterates what we’ll see on Monday night which was he thought she knew how he felt.

-Chase actually comes up on stage to sit next to JoJo to talk to her about what happened in the fantasy suite and brings up again why she just didn’t let him go at dinner before they went back to the suite. She gives the run around of “I thought I wanted to be back there with you, but then when I was, I just wasn’t feeling it” blah blah blah. Something along those lines. Basically didn’t mean to hurt him, she’s sorry, etc. They end on a good note.

-There is a preview of “Bachelor in Paradise” shown. Nick, Jared, the twins, Amanda, Sarah, and Jubilee are in the audience. None of them are interviewed, they’re just there as we saw all weekend on social media. That wasn’t news.

-And of course, bloopers.

Yep, that was pretty much it. Not sure what you were expecting since these shows are pretty much the same every season. It’s just so hard to take them seriously because it’s been two months since filming, we’ve seen how all these guys are pretty much BFF’s on social media, so anytime there’s a beef brought up, or someone says they had a problem with someone else, it just feels so contrived. Probably because it is. Like, they might not like the way someone acted 2 months ago, but lets be honest, they’re really over it by now. They’re just told to act like they aren’t by producers to create drama on the show. Outside of Chad, all these guys have pretty much gotten along.