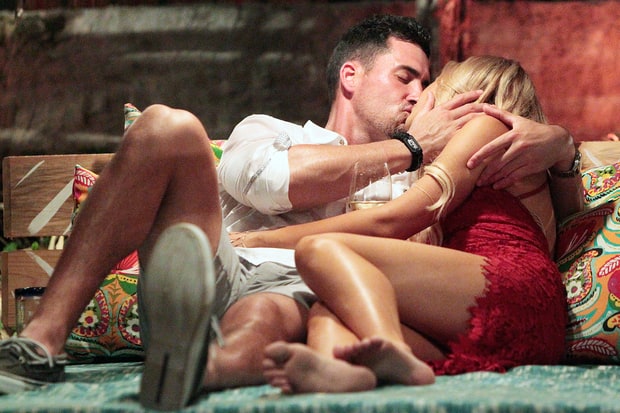 All season many of you have been sending me your emails and tweets regarding how Josh & Amanda haven’t hid the fact at all that they’re together. Even last night again when Josh was skyping in on “After Paradise,” he was doing it from Amanda’s bedroom as many of you pointed out. Again, there’s no need to keep mentioning it every time they post a pic in the same place because it’s not news anymore. Hasn’t been for a month or so. But all of that info wasn’t enough, today’s cover of US Weekly should put it all to rest. Now I’m sure you’re next question will be, “Why is the show letting them do this?” I don’t know. My guess is because they just don’t care as much about the spoilers regarding BIP and are much looser with the rules. Because when “Bachelor” and “Bachelorette” roll around, are they all the sudden going to let the final couple just start hanging out in public together, holding hands, and “live” together while the show is airing? Of course not. I just think the funniest part of that cover story is the picture. It’s not even a picture of them together. It’s each of their bio pictures from when they were on their respective shows just pasted together. And despite what their cover story is, and no matter what each of them say in that article, just keep in mind that nothing everything you read in tabloids is true. Never forget that.

Get your “Dr. Reality Steve” emails in for tomorrow. We’re at 5 right now meaning I only got one more after yesterday’s plea. Lets try and get to 8. Also, I think that tomorrow night might be the last live video chat of the season. I’m out the next two Thursday’s, and Crowdcast hasn’t been the most responsive when I’ve told them about issues regarding the video feed going out numerous times during the broadcast. But I’ll let you know for sure tomorrow.

Some thoughts on last night’s episode along with “After Paradise”:

-I think most people are in agreement that Izzy made a dumb decision with Vinny. Of course she has every right to explore her options out there, but it looks like she was tempted by nothing other than Brett’s looks, which doesn’t seem something too solid to base a relationship off of. So she comes on “After Paradise” and says it was more about the lack of quality conversation she’d had with Vinny, and she felt they didn’t talk about anything significant and it was more physical than anything. A purely physical relationship in “Bachelor” world? Shocking I tell ya’! Izzy could’ve handled it better than she did. Yes, it’s better she told him then than later on down the line, however, she basically blindsided him since he had no idea. I thought Vinny came off looking way better in the end and Izzy, well, maybe she’ll show up again next season.

-It was awesome to see Tanner and Jade show up to prove to all these contestants that love CAN come from this silly show. They’re living proof of it. Not to mention, Tanner and Jade can absolutely share with all those couples the ins and outs of how they too can get on “Celebrity Marriage Boot Camp” and make some extra coin. Glad they could be of service. However, they were very helpful in one aspect of their appearance. They got Grant and Lace to fight. Or at least have an argument. She looked at them and realized she didn’t see herself like that with Grant. At least at that moment she didn’t. All kinda moot since we know they’re engaged now. But basically even Lace got the sense that Grant is telling her loves her WAAAAY too much. “You repeat yourself a lot.” Uh huh.

-The best exchange they had with a couple was when they spoke to Josh and Amanda and had to witness the father bear protecting his young. Josh of course made sure to kiss Amanda in front of them, along with give her a giant bear hug like it was a wrestling match or something. Even Tanner said in an ITM that he basically didn’t buy what Josh was selling. I was half expecting Tanner to mock sticking his finger down his throat after those two got up and left. I sure did. It’s seriously nauseating at this point and incredibly uncomfortable. I mean, lets go to the voice of reason now when it comes to this show. Hey Nick, why are they constantly showing Josh and Amanda making out? “Because Josh and Amanda were always making out.” Guess that answers that.

-Hilarious that Tanner and Jade gave the date card to Jared and Caila considering Jared is Tanner’s boy. No favoritism there. Then again, Carly is Jade’s BFF and was in her wedding, so I’m wondering if there was any fighting over whose friend should get the date card. My guess is Jade wanted to give it to Carly and Tanner wanted to give it to Jared. So to decide who eventually got it, the producers said, “You’re giving it to Jared. We have a storyline we need to tell and we’ll just put Evan and Carly on another date.” Bingo!

-So Jared and Caila have their date, which obviously turns Ashley into a mess again. I wonder if Ashley watched that date back on TV last night with her hands covering her eyes. Jared and Caila were going at it something fierce in the water. Like, I thought he was gonna pork her. Yes, I said that. Sorry. Couldn’t get “European Vacation” out of my head. I think Jared did more with Caila in the one minute of footage we saw them in the water than he’s probably ever done with Ashley in all their time together. But that’s just a guess. I mean, she did get to second base with him, so there’s that. I think Jared might’ve stolen third with Caila.

-Evan and Carly got sent on a sweat retreat where Carly finally opened up and told Evan she was falling for him. This was great and all, but isn’t this the exact same place where Brandon and Dylan went to rid themselves of Kelly Taylor? I think it might’ve been. I’m not so sure sitting with someone in a boiling hot teepee is something I ever plan to explore in life, but I guess it worked for these two. I’m not sure who in the world thought up this date, but they should be fired. And 90210 should sue for copyright infringement. Nobody steals a 90210 storyline without giving full credit, dammit!

-As for the Ashley/Caila/Jared drama, the next day Ashley warned Jared about Caila saying he looks way more into her than she looks into him. Which of course, she does. And proved to be true that they couldn’t even last 2 months after the show ended. Carly even took to Ashley’s defense last night with this tweet:

To be fair….it wasn't just @ashleyiaco questioning how Caila felt about Jared. ALL OF US were #BachelorInParadise

Soooo yeah, not only does “After Paradise” host Michelle Collins question Caila’s sincerity, there were plenty of others out there who did as well. Can’t say I’m surprised. This goes as far back as Ben’s season. There are just people out there who don’t buy her act.

As for next week, I can let you know right now that I won’t be live tweeting as next Monday night is my fantasy football draft. So I’m gonna have to watch the show later, not to mention I’ll also be in California. Of all the ones to miss live, I’m bummed it’s gonna be this one since next week is when Mount Murray erupts. Take cover and hide the women and children. It’s not gonna look good for him.