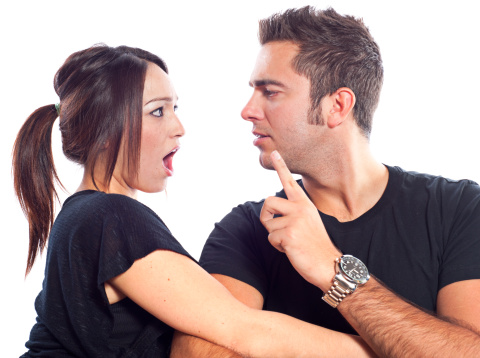 I had something weird happen to me earlier this summer and even though I’ve gotten over what happened, I still think about it and have some questions for you.

I live in a place where we get a lot of people visiting for vacation and work, and being on Tinder/Match sometimes I will randomly meet up with someone from out of town if I have nothing better to do. This is what happened to me: I met a man online and we went for a harmless hike together and we ended up hitting it off so well that we spent 3 weeks straight together having some of the most wonderful moments and adventures I’ve ever had. It was an amazing 3 weeks and I felt like I was dreaming it was so good. Well, it actually was too good to be true. It all ended when I found his wife’s name on his luggage the morning I brought him to the airport and discovered he was married with 2 young children.

Steve, why do men do this? I am not a stupid person, in fact I have 2 masters’ degrees yet I was completely fooled by someone who was so good to me yet was hiding a huge secret. And, on the other end, his wife is equally as smart and wonderful yet he completely fooled her as well (we did talk and exchange stories after this happened). He was so good at lying to both of us and keeping his stories straight that it amazes me when I think back.

I’m worried this could happen to me again because the more I’ve talked to other friends about what happened to me, the more I find out about these awful stories about men cheating and getting away with it for a long time before they finally get caught. I’m against hanging out with visitors now, even if its harmless and meaningless, but in the back of my mind I worry about being lied to again by someone who does live in the same city as me. I don’t want to ever be a woman who needs to snoop or go through her man’s phone/social media, but I don’t want to be naïve and too trusting as well. I want to be able to take what someone is sharing with me at face value and believe them! But how do you really know someone is being their honest and true self? I think it is sad I even have to ask this question.

Steve in this world of online dating apps, it is not enough anymore for you to straight up ask someone if they are married and have children, because they will still lie and hide these things. I think it is sad how dating apps have changed dating in this way. It is so easy for people to pretend to be something they are not.

Comment: I don’t do dating apps but I’ve heard stories like yours numerous times. How did he spend 3 weeks with you and his wife had no clue? Doesn’t he have to be home for anything? Why do men do it? Because they can. No answer is gonna satisfy you and it sucks that it happened, but you aren’t the first person it’s happened to, and you won’t be the last.

I’ve reached out to you a few times already, since I really appreciate the male perspective on my neuroticism. My question for you today basically boils down to how/if you would like to be contacted by an ex in terms of considering getting back together.

If you google this topic, there is a lot of talk about basically not contacting a guy…letting him come to you. I don’t necessarily disagree with that, but also find it frustrating, and hate playing “games.”

A brief run-down of my situation: I was in a borderline abusive situation for a while. As a means to move on, I tried online dating. Early on, I met a great guy…we were comfortable with each other from day one. That said, the fact I was on the rebound, I broke it off pretty quickly saying it wouldn’t be fair to him to start a relationship. After about a month, we reconnected and dated for several months until I freaked out again.

This was about three months ago. Since then, I’ve done some counseling and realized I push people away as a defense mechanism because I’m scared of getting hurt. I now realize that is what I did to this guy who was never anything less than fantastic towards me. I’m not gonna sit here and say he’s definitely my soulmate…but I’d like another chance now that I’m in a better mental space.

I know I am at least still on this guys radar. I hear from him from time to time, and we ended up hooking up a few weeks ago after a few weeks of texting. That said, he is very clearly guarded towards me. I’m so worried about seeming “clingy” that I really don’t reach out to him whatsoever. Any contact we’ve had has been initiated by him. I’m starting to feel just immature…I’d like him to know I’ve realized the error of my ways and would like another chance, but don’t want to freak him out.

Should I let him continue to come to me? Or is it okay to be genuine and let a guy know how I’m feeling even if he isn’t 100% on board at the moment?

How should I go about this?

Comment: You said you still see him and hooked up as of two weeks ago, so that’s good. And good to hear you’re working on yourself. You just need to spend more time with him. And I’m sure in those times, possibly laying in bed together, the heavy stuff will come up and just tell him what you told me. There’s nothing wrong with that. He needs to hear that. But more importantly, he needs to see it too. Don’t push him away, don’t be afraid to talk about your past relationship that was abusive, and if he’s serious and wants to pursue something with you, he’ll understand. If he’s just looking to get laid, then he’ll find any “clingy” thing you do and use that as a way to get out. But I suggest continuing to hang out, let him contact you, maybe send a flirty text here and there to maybe initiate conversation, but keep it pretty mellow at this point. He obviously has reason not to believe you’ve change – until you prove to him you have. And that only comes with more time together.
_____________________________________________________________

I normally wouldn’t bother to write in, but something in the reader emails struck a cord with me today. There’s been a lot of attention given to Ashley I’s virginity (makes sense given her own tendency to talk about it) and someone mentioned that at 26 and willing, it doesn’t make sense that she hasn’t lost her virginity yet. All of this is to say, I’m a 20 year old attractive woman and I’m still a virgin, by my own choice. Is this something that is odd or is going to be held against me by men I might date? I’m not opposed to sex but I feel that I need to have a strong connection with someone before I have sex with them and I haven’t found that yet. In addition, I have some severe PTSD that makes it hard to just jump into the current dating world of Tinder and random hookups. I’m not entirely sure this is something you can answer, but it bothers me to think that my potential dates would find something to be wrong or not up to snuff simply because I haven’t had sex even though a majority of people my age have.