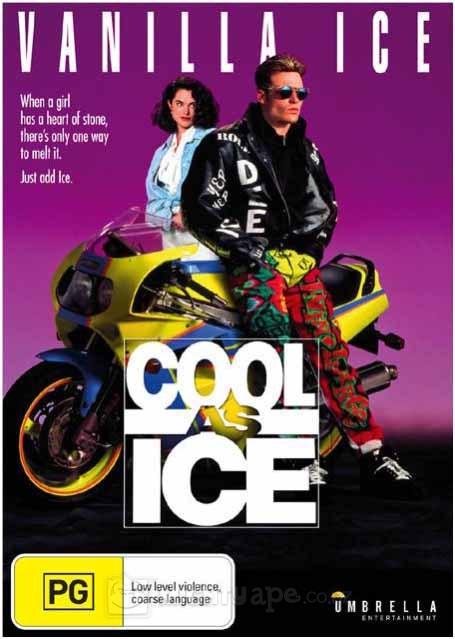 There’s a reason that picture above is the featured picture in today’s column. Later on you’ll read why Vanilla makes “Daily Links” today. I bet 99% of you didn’t even know that in 1991 he starred in a movie called “Cool as Ice,” that had such lines as “drop that zero and get with the hero” and “looky looky looky in Kat’s black booky.” Well, I did. And I loved all 91 minutes of it. Well, as much as you can love a horribly bad movie. I bet you also didn’t know that my best friend in 1991 (still my best friend to this day) won tickets through KIIS-FM to the premiere of “Cool as Ice” at Universal Studios, so two 16 year old kids who basically worshipped Vanilla Ice at the time, got to see him and his posse and watch the movie just days after my best friend got his drivers license. I still to this day don’t know how our parents let us drive up to Universal Studios from Orange County on a school night to see some low rent, low budget “blockbuster” starring Vanilla Ice – but they did. And it was one of the most memorable nights of this 16 year olds life. Even somehow managed to get in to the after party. Met Bud Bundy, Cuba Gooding Jr., and Punky Brewester. If I can somehow rummage through old pictures and find them, I’ll be sure to post them on here. They’re around here somewhere, I just need to look. What a night that was.

-Here’s all your “Survivor” goodness today. EW.com and RealityBlurred.com have your recaps, with our recapper Bryan Fischer and Stephen Fishbach on People.com coming tomorrow.

One interesting article before I get to the recaps was posted by Andy Dehnart on RealityBlurred.com yesterday, which charted people of color getting eliminated earlier and earlier in “Survivor” seasons. Fascinating to look at. Does it mean the other contestants are racist? No. But the numbers are the numbers, this isn’t an opinion piece. And the fact is people of color are getting eliminated early in “Survivor” at a pretty high rate. Not to mention this article was posted before last night’s episode, so we can now add another to the list.

-Tom Cruise is making the media rounds with the release of “Jack Reacher” this weekend. Yesterday we had the link where he was on Kimmel telling a “Top Gun” puking story. Last night, he went on James Corden’s show and participated in the “Roll Call” bit. Not as good as carpool karaoke or the rap battles, but still a good one if solely for nostalgic purposes:

-Rachel McAdams says she’d be down for a “Mean Girls” reunion and musical. Well, so would I since Rachel McAdams is in my top 5. However, what am I missing about “Mean Girls?” I remember seeing it in the theaters and thinking it was ok, but I guess I’m kinda surprised at what a pop culture phenomenon the movie has become. Maybe I need to rewatch it to see what I’m missing. I just don’t remember it being that memorable. I will make an effort before the calendar year is up to re-watch “Mean Girls” and give you my thoughts.

-Since KUWTK is a never ending show that seems to have 4 premieres and finales a year, I can never keep up with it. Especially since I don’t watch it. But it seems like every other week something about it is getting promoted as the “premiere” or the “finale.” Whatever the case, there’s a premiere this weekend for it again and Khloe is worried about Scott’s partying. Oh man, I have so many questions. Would probably be answered if I actually watched it, but oh well. You’re worried NOW, about it? Hasn’t Scott been partying for, oh I don’t know, ever since you’ve known him? I didn’t even know Scott was in their lives anymore (well, other than being the baby daddy to Kourtney’s kids). I just figured he went off the show once they broke up. Or are they still broken up? And let me guess, the “finale” of this season will be covering Kim’s holdup in Paris, right?

-One thing that can guarantee you’ll appear in “Daily Links” is: a Taylor Swift story, game show bloopers, or TV newscast screw-ups. I could watch those for days. Here’s a good one from Hawaii where some karate instructor tried to get us to believe he was cracking cinder blocks with his hand. Unfortunately, a reporter did it for him. How embarrassing. There is nothing better than someone having a laughing fit on live TV. Or live radio, as I did a few times in my past radio career.

-It’s being reported that Jennifer Lawrence is casually dating “Black Swan” director Darren Aronofsky. Why don’t they just spell it out for everyone? They’re f-buddies. Nothing more, nothing less. Because if they were exclusive, the two of them would be official about it. But when their PR team gives this story to the media and uses the phrase “casually dating,” well, we know what that means. I’m sure this one will last.

-Sad news to report. Just a few weeks from his elimination on DWTS, Vanilla Ice and his wife Miss Ice, are getting a divorce. Awwwwww. All I care about is if she’s still allowed to collect any of the royalties from one of the greatest worst movies of all time, “Cool As Ice.” Please, you must see it. I’ve probably seen it 20 times and I’m not kidding. You’ll thank me later, trust me. Damn this Rolling Stone critic who gives a little background and bashes the movie. They know nothing of what they review. It’s Vanilla Ice back in his white rapper glory, solving crimes, falling in love, and wrecking havoc. Fascinating stuff. How can you pass up a movie that has the tagline, “When a girl has a heart of stone, there’s only one way to melt it. Just add Ice.” You can’t. Go see it. You will be blown away. I mean, this is the opening sequence to the movie. ARE YOU NOT ENTERTAINED!!!!!

-I don’t watch “Catching Kelce.” Zero interest. But I came across this story from the latest episode that I thought was pretty funny. Apparently 2 of the girls left both once dated Fabio, got in an argument over it, so Travis ended up booting them both from the show. It’s about as random as you can get – or was it? Don’t you remember “Average Joe?” I can’t remember what season it was but the final couple ended up breaking up because he found out that the girl once dated Fabio as well. What the hell is going on here and why is Fabio ruining reality TV dating shows? Especially when the guy hasn’t been relevant in at least 15 years. Bizarre.

-Jennifer Grey was asked who she would cast in the Baby and Johnny role if “Dirty Dancing” were to be re-made. Her answer was Natalie Portman and Ryan Gosling. Huh? I was actually surprised she didn’t say Derek Hough considering he’s probably a 1000x better dance than Ryan Gosling, not to mention she won a mirror ball trophy with the guy. Natalie Portman? She should be banned from all future re-makes after signing on to Chapters 1, II, and III of the “Star Wars” movies.

-And finally, Tom Hanks is hosting SNL this week. Lets hope he dusts off some of our favorite characters from the past like “Mr. Short Term Memory” for the episode. “Tony Randall!” Here are the promos for this week: