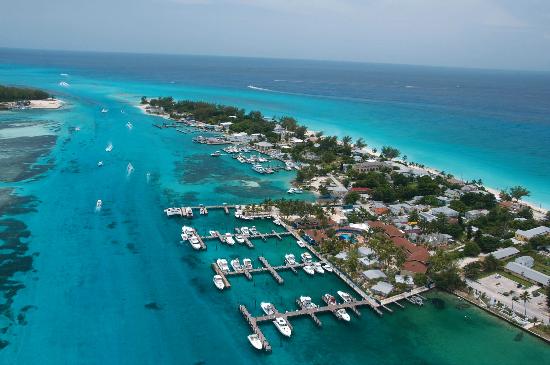 In all the seasons I’ve been covering the “Bachelor” and “Bachelorette” since social media has become a thing, I don’t think there’s ever been an outside-the-U.S. location they’ve been to where at least one picture hasn’t gotten out on Twitter or Instagram. I could be wrong, but it seems like everywhere they’ve ever gone, whether it’s Croatia, or England, or Ireland, or Mexico, or Uruguay, you name it, either I get pictures sent directly to me, or something shows up on social media. Even the Bahamas last season there were a few pictures that got out. Well, they’ve been in Bimini, Bahamas for episode 7 for three days now, and nothing has surfaced. Maybe by posting this I just reverse jinxed it and some pictures will get out today. Personally, I don’t care if they do or don’t. If they don’t, just means there will be more for you to find out when I post the spoilers. I mean, lets just say a picture of the final 6 from the Bahamas got out. Well, it’s not to hard to then say, “Here’s who I think the final 4 will be.” Well yeah, how hard is that when you know who the final 6 are? There’s only so many combinations of 4 it could be. So the less that gets out, the better for me. I highly doubt a picture of all 6 will get out at this point, but I gotta think a picture of Nick on a 1 on 1 date down there will surface soon. We’ll see. However, the less that gets out, I’m thinking I might change things up a bit this season and wait longer to reveal stuff. I haven’t decided yet.

-Ooooohhhhh lookie here everyone. Nick is finding love for real on the show! Is that the most ridiculous story you’ve ever read? The fact that they have to point out that the love he’s finding on the show is “for real,” pretty much tells you all you need to know about what the outside perception of the show is. That story is no different than any other story they ever release during filming. “Best season yet,” “going very well,” – do you honestly expect a story, that’s obviously leaked to them from someone on the inside, to say “Yeah, this season isn’t that great. Don’t expect much.” Of course not. Every season is the best season ever, every season is one you won’t want to miss. This is a non-story. US Weekly hasn’t posted a thing since the Backstreet Boys date, and this is what they come with? It tells you nothing of substance. But then again, should anyone be surprised? That answer would be no. They are trying to be a “spoiler” and failing miserably.

-Jamie Foxx and Katie Holmes are apparently still a thing and have not broken up despite recent reports saying they had. It’s kind of amazing that these two have been dating for almost two years now and not once have they ever publicly appeared as a couple together at any event. Man, Katie must be scared sh**less of what Xenu will do to her now that she’s out of Scientology and dating a black man. I get trying to keep your private life private, but if they are really an item, you’d think in two years maybe they could do, oh I don’t know, ONE thing together publicly?

-Isn’t Kim Zolciak the one who’s constantly posting bikini pics then constantly telling us she’s had zero work done to herself? If that’s the case, how does she expect people to believe her when she’s getting cellulite removed from her ass? So we’re only supposed to believe that’s the only “work” she’s ever had done, even though it clearly looks like she’s taken a sandblaster to the rest of her body at some point?

-I tweeted this story out and it’s rather funny. In 1993 at Mission Viejo High School (for the record, the same year I graduated high school and MVHS was in my county), Cubs prediction Michael Lee had as his senior quote that the Cubs would win the 2016 World Series. Apparently this is legit as others have come forward showing the yearbook. Pretty damn impressive. But hey, lets talk about the dude next to him who went with the completely unoriginal senior quote of lyrics from U2’s “In the Name of Love.” No points for you, nerd. And hey, Jodi Lemire, how about you stop being all rebellish and actually participate in the senior quote, huh? Outcast. Bet you feel stupid now.

-The husband of Kate Beckinsale, Len Wiseman, has filed for divorce. This just in: Len Wiseman is a f***ing idiot. And everyone can say it with me now – Kate Beckinsale is in my Top 5. I think I’ve had a Top 5 in every story this week. My Top 5 I think is approaching 20 women now. What would be really interesting is if one day I revealed my top 5 or 10 bachelorettes from the show. That would be tough. And I’m not talking about how they were on the show, or if I’m friends with them. I’m just talking about strictly who I would rank in my top 10 of who I think are some of the best looking bachelorettes who’ve ever been on the show. Maybe I will sometime.

-One of the things that I have to do periodically throughout the day while the “Bachelor” is filming, is check social media using the keyword “Bachelor” for anyone posting “Bachelor” related filming pictures. It’s certainly been helpful at times as that’s how I’ve been able to retweet things in the past. However, these last couple days, the same story has appeared non stop on there and that’s the two girls who were on the Australian version of the “Bachelor” that ended up falling for each other. I mean, go do a Twitter search of the word “Bachelor” and see how many times that story shows up in your feed. It’s nauseating. We’ve had 21 seasons of the “Bachelor” in the US and it’s never happened. Could it? I guess. But to me that would mean the casting department did kind of a sh***y job, no?

-Guys, you can now have sex with Kim Kardashian. Sort of. Her sex tape with Ray J is being made into a virtual reality experience. Ummmmm, ok. Wait, you mean dudes actually put this thing on their head to get off? And they do it to Ray J cramming Kim on vacation? I know there are some freaky people out there with some jacked up fetishes, but this might take the cake. Have at it, weirdos. I’m guessing for $119 and the idea of having sex with Kim is probably cheap to them.

-If you’re a big fan of Kendall and Kylie, and often ponder to yourself, “I could totally be friends with them if they would just give me the time of day,” I hate to bring you down to reality, but ummmm, you can’t. And you won’t. Yesterday, Kendall went with the most humble brag ever on Instagram, sharing that she got matching Ferrari’s with Kylie. Yes, because all 19 year olds need Ferrari’s. Amazing that her sister was just robbed at gunpoint, essentially because she flaunts her material things, and Kendall basically went and did the same thing. I fully expect Tara now to go key the words “Die Val” into the side of the car.

-The Victoria’s Secret Fashion Show is heading to Paris this year and one of the lucky angels gets to model a $3 million bra this season. Outstanding. A bra. $3 million dollars. So what, it can just end up on the floor within seconds? I don’t care if money is not an issue to you. If you buy a $3 million bra, you’re an idiot. No need ladies. No need.

-And finally, Kristin Cavallari IG’d a picture yesterday with hubby Jay Cutler, wishing him well on his comeback as he’s back in action facing the Vikings next Monday night. You know, because that’s what Bears fans want to see. More Jay and Kristin pictures. Then again, just like the Scottie Pippen story yesterday, I don’t think Chicago Bears fans give a crap what’s going on with that god awful team right now. If the Cubs win it all, the Bears could lose the rest of their games by 30 and no one would bat an eye. However, if the Cubs don’t win it, and the Bears continue to suck donkeys all season, you can expect the bitterness in the fans to come out even more. They’ll probably take pitch forks to the guys house. Broncos’ fans robbed Demarcus Ware’s house this past Monday night while he was at the game – and he’s GOOD, not to mention won them a world championship last season. I can only imagine what disgruntled Bears fan will do to Cutler’s place.