Merissa Pence briefly contacted me earlier this month. Said she had dated Peter briefly back in 2012 when she was living and working in LA. Here is them back in the day:

Her main goal since the time she contacted me was to warn Peter about Victoria. She knows who she is, what she’s about, and all the stories I reported yesterday. Merissa is not some scorned ex looking for revenge. All she kept telling me is “how can we let Peter know.” Obviously I have no contacts with production, but Merissa somehow got a hold of production earlier this month, told them, and they said they’d get back to her. At this point, I was planning of having Merissa do an interview with me once I saw how far Victoria lasted this season. I didn’t know when, but we’d briefly kept in touch and I said I’d get back with her as well. Then yesterday happens.

On Sunday, Merissa was contacted by production saying they liked her story and to stand by. Then Sunday night they told her they didn’t need her to show up for the date on Monday. She told me this after I posted my column yesterday, which is why I posted this tweet:

(UPDATE): In the last 20 minutes I've heard of yet another person who was called by production to show up to today's date and confront Victoria, but then they told her they didn't want to bring her on. So it certainly looks like her past is going to get mentioned on the show.

So at that point, Merissa and I didn’t know what was going on, but we felt like SOMEONE was being told to come to the date and confront Victoria. They couldn’t NOT at this point after the story was now out. They didn’t really give her much of a reason why they didn’t want her to come anymore. Then I released my story yesterday morning, and whaddya’ know, Merissa is contacted late in the afternoon and told to come down to The Shack and be there by 3:00. Here’s where the misinformation that’s out there needs to be corrected. Once Merissa showed up, no one from production talked to her. She wasn’t mic’d up, wasn’t told what to do, wasn’t told where to stand, wasn’t told “Hey, Peter’s gonna come talk to you after the dance,” etc. Nothing. She showed up with friends and sat and watched, not even expecting to ever see or talk to Peter. Why would she? No one told her anything once she got there and she didn’t even have a microphone on her, and she saw that Pamela Burnham and Morgan Speight were there and mic’d up. CORRECTION: Morgan contacted me to tell me that she was never mic’d up yesterday, nor was she told to appear. She just showed up to witness a date in her hometown. So she just watched the date with her friends from a distance and then went to a bar.

After Peter and Victoria’s dance, Victoria is taken away by producers to talk to them and I’m assuming shoot some ITM’s, Peter walks another way and walks by Merissa. She called out his name, he recognizes her, and they start talking. Again, she’s not mic’d up, and not until Peter and Merissa start talking, do cameras then rush over and catch them to start filming. Merissa then tells Peter about Victoria and what she knows. She’s ruined marriages, she’s a liar, she’s a manipulator, and that she really thinks he deserves someone who’s there for him, and Victoria is not it. This is the first Peter has heard of this news, says it was a huge buzzkill because he’s had such a great time with her, but he thanks Merissa for telling him, they hug, and he leaves immediately with producers and gets into a car. Was told by others when he was walking away they saw “after he talked to the blonde girl,” he had tears in his eyes. After their talk, Merissa was never contacted by production, no one came up to her after their convo, and she left with her friends. 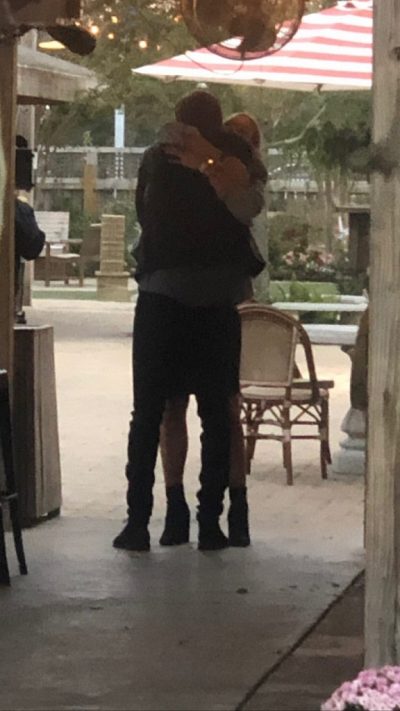 I believe Merissa when she says that because that’s all she’s expressed to me since I first spoke to her. This has nothing to do with rekindling something with Peter. She doesn’t want him back or anything like that. That had something 7 years ago, she cares about the guy, and she wanted him to know about Victoria since she figured he didn’t – and she was right. Already I’m hearing people attack Merissa and acting like she just wants 15 minutes of fame. Seriously? I heard the exact same stuff with Haley Stevens. Was Haley’s name everywhere and doing interviews for a week when the Jed stuff broke? Of course. Is she this huge country star now touring the world gaining all this notoriety because of it? No. You’re acting like someone’s life is going to change and all of a sudden they’re gonna be this massive TV star now that they came on the show to out someone else. Please. Save your breath. I hear the same stuff every season anytime anyone whose not on the show speaks out against someone who is. “They just want their 15 minutes.” Great. And nothing ever comes of it. Merissa had 1,500 IG followers before I posted who she was. Now she has 2,400. You’re acting like now she’s got a million and will get all these offers in the entertainment world. Not to mention, the ironic thing being people defending Victoria and attacking Merissa for just wanting 15 minutes of fame when that’s exactly what Victoria is doing by going on this show. I can’t handle ignorance like that.

Not to mention, attacking Merissa’s character for warning Peter has nothing to do with the bottom line. Isn’t the point everyone’s been making since I posted yesterday’s story that Peter needs to know about Victoria? That’s what she did. Peter now knows and has to decide what he wants to do. For the last month, this guy was clueless. Whether it was Merissa that did it, or whether it was Pamela Burnham and Morgan Speight, the point is he needed to know. Does it really matter who told him? By the way, Pamela and Morgan never spoke to Peter on camera yesterday (or off camera from what I heard since Peter left right after his talk with Merissa) so them being mic’d up and not used is just weird. CORRECTION: They were not mic’d up. Especially when the person they did use to talk to Peter, Merissa, wasn’t mic’d up or even told what to do once she arrived, or spoken to after she talked to him. Like I said, the whole thing is bizarre. Maybe Pamela and Morgan were the backup plan if Merissa never saw Peter. Maybe Merissa was the backup plan and it was supposed to be Pamela Burnham and Morgan who told him, but once Merissa told him, they didn’t need them anymore. The thing I find most crazy is that, yeah, production told Merissa to show up (less than 24 hrs after they told her they didn’t need her), but then once she’s there, no one says a word to her. She shows up, has no one from production say a word to her, talks to Peter, has no one from production say anything after that, and leaves. Merissa is already getting hate online, I’m receiving stuff personally about her, and I just don’t get it. These people are missing the point. Peter now knows about Victoria, and that’s all that matters.

At this point, after knowing everything that went down yesterday, I really don’t think this is the nail in the coffin for Victoria anymore. Do I think she’ll win? No. But I think now she’s gonna make it through next rose ceremony. I’m just looking at it from an outsider perspective. Peter has had a month long “relationship” with Victoria, and yesterday is the first time he’s heard anything in regards to her past. Yes, seems like he was taken aback by it, but I’m sure later on last night, he confronted Victoria, she denied it, said it wasn’t true, probably said don’t let anyone come interfere in our relationship, I’m falling in love with you blah blah blah, and now Peter has to weigh that versus what Merissa told him. My personal opinion is I think Victoria’s manipulation will win out. I hope it doesn’t, but I don’t know if what Merissa said to him will ultimately take effect right away, and I wouldn’t be surprised if he keeps her around. I can see him keeping Victoria around just because he doesn’t want to give up just yet and end what they had over a 10 minute conversation with Merissa. We’ll know more after the rose ceremony this weekend, but I don’t think it’s a done deal she’s gone next. I’m sure Peter took what Merissa said to heart, he was bothered by it in the moment, but I think this guy wants Victoria in the fantasy suite and that convo yesterday isn’t gonna be enough to deter him. We shall see.