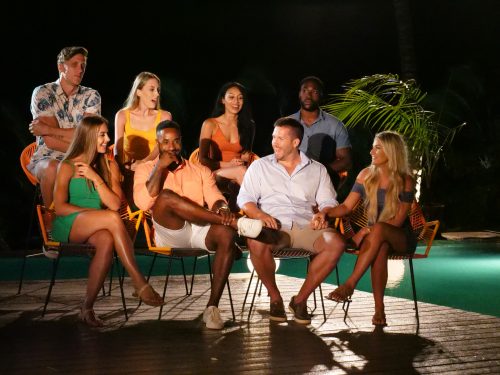 Brittany heads over to where Karl is laying down. “I just want to lay with you,” she says softly, her eyes once again never leaving his face. (Seriously: if you’re ever forced to be in a staring contest and the rules dictate that you can bring a partner, Brittany should be that partner.) First she slips her fingertips beneath the back of his pants. Then her hands move and it looks like she’s lightly touching his crotch. And then? Then she suggests they go upstairs and just sleep, which very much reminds me of all the times in high school when boys would ask if I wanted them to stop by “so we could watch a movie.” While Karl’s brain and Karl’s penis engage in a mini Battle Royale, Katheryn joins John by the pool. She’d really love it if he’d start murmuring words of adoration about her, but she’s more than okay listening to how excited John is to finally confront Kady and let her know that she has manipulated and blamed him for things over the course of their entire relationship. He finally realizes the truth! Life on that island has been hard for John. He’s been getting very little sleep as images of his girlfriend enjoying a slumber party with a chiropractor continue to dance out of rhythm jigs in his mind. The only person feeling deliriously happy right now is Katheryn. She’s decided that John becomes more appealing to her each and every day and now that his relationship is tattered and he’s sinking into a depression, she’s got herself a clear shot at the guy. And who doesn’t want to land a man who will struggle with trust issues for all of his coming days? Katheryn could soon be a very lucky girl!

Wynn wants to be as lucky as Katheryn thinks she’s about to be so he pulls Kady aside to see if they still have a shot. All evidence points away from these two ever becoming a real couple. Kady’s spent the majority of her recent time swimming with Johnny and showering with Johnny and smooching with Johnny, but Kady tells Wynn that she would like to take him on another date. However, she also requests that Wynn respect what she and Johnny have going and then she plops herself down on Johnny’s lap and fully makes out with him before bed, so yeah – Wynn is not winning here. But Wynn doesn’t like not winning, so he knocks on Kady’s door just as she and Johnny are climbing into bed and he asks to speak to Kady. Johnny reads Wynn’s request for what it probably is – a desperation shot – and very soon their discussion ends and Kady returns to bed where Johnny is still waiting and they snuggle up for yet another evening.

Regardless of who slept where last night, I hope everyone got at least two or three solid REM cycles in because today is the day they will either get to watch a thirty-second video message that leads to some comfort or be greeted with horror when it’s revealed that a significant other elected to send over absolutely nothing at all. What I’m saying is that this particular day on this particular island is going to seriously suck stringy balls for some particular people. Nicole heads into the makeshift screening area first and pulls a tablet out of a wooden box. She listens as Karl tells her he loves her and misses her. He also mentions that he’s seen a few things that have caused him to feel disappointed, but he’s clearly still interested in a relationship with her when this experiment ends. That Karl spoke kindly and compassionately instead of with a voice tinged with judgment leaves Nicole a little teary. It would be so much easier if Karl behaved like a total d*ck so she could just ditch him like she seems to want to, but Karl is not a d*ck – he’s not even really wrinkly foreskin. Still, Nicole has grown a lot since she arrived on Temptation Island and it’s very likely that she’s outgrown her boyfriend. Good thing he’s got a willing Aquarius in the wings, huh? But wait! Though Nicole is growing, it seems like she’s open to the possibility that she and Karl can dig through the surface of their relationship and maybe uncover something deeper. It’s like they’re explorers on an excavating mission! The issue still at hand, however, is whether or not they’ll discover multilayered levels of love or rip through their relationship until they get to the gooey core at the center and discover – much like that time Geraldo opened that tomb on live f*cking TV – that there’s actually nothing of worth hiding inside.

Kaci is next to approach the wooden box, but before she opens it, she takes several deep meditative breaths in an effort to center herself and to probably lower her skyrocketing blood pressure. But when she opens the box, nothing is inside.

Quick message to production: While I realize the reveal of absolutely nothing inside that box gets you a moment of dramatic television, could Kaci not have been told ahead of time that her boyfriend of five years didn’t value her enough to send any sort of message? Because to have her sit there in the center of the frame and open that box to reveal a literal void – when all she’s felt thus far has been a gaping emotional void – is maybe taking the license to manipulate these people just a wee bit too far.

Kaci is upset, but she’s not stunned that Evan didn’t record her a message. Still, she sent him the gift of acknowledging his f*cking presence and she thinks he could possibly become emotional upon seeing it. Does he? Well, he pulls out the tablet and watches his longtime girlfriend’s chin quiver along with her voice. She tells him she loves him so much and she leaves him with no doubt that she wants to be with him at the end of this mess. She also mentions that she’s seeing signs of Old Evan in the footage production screens for her as a way to destroy whatever is left of her soul and she wants him to be the person he knows would make her proud. Evan slips the tablet back into the low rent Pandora’s Box and feels the guilt hit him like a tsunami loaded down with fragments of glass. He can see how much pain Kaci is in and he is demolished. They’ve been through a ton together. Their lives have been intertwined for five years. He misses her now in the way he hasn’t this entire time because he’s chosen to distract himself instead with someone shiny and new, but now he feels like a total scumbag. I know it’s easy to rip Evan apart for his actions and his choices. I’ve done it a bit myself because, well, that’s kind of what happens when you hire someone to recap a show wherein a guy in a relationship makes the decision to both f*ck and declare his undying love to a woman he’s known for a matter of weeks, but I do feel for the guy. He will probably end up puncturing at least one woman’s heart and every part of this scenario feels so hellish to watch that I actually scoured the end credits just to be sure Lucifer is not an Executive Producer of this televised madness.

Shari is next to receive a message. Javen calls her “Baby Girl” and lets her know that, while he is loosening up, he thinks of her every night. “Keep me in mind,” he says as the video fades out, and Shari – filled with a sense of optimism and calm – all but bounces back to her room. Javen’s message from Shari begins with the words “My Love,” and these two people who I had pegged for destruction during the first episode will probably not only stay together, but they seem like there’s a chance they could end up happy.

And then there’s Kady. Kady is sh*tting spiky bricks. She cries before she even turns on the message and she keeps her eyes closed throughout so she doesn’t have to see the agony streaked across John’s face as he speaks about his love for her and his disappointment in her. He makes sure to let her know that he hasn’t crossed any untenable lines and Kady walks away feeling guilty and selfish and like she’s made several huge mistakes. She’s confused! Should she continue to devote her life to a man whose virility she questions hourly and publicly or should she allow a guy she’s recently met continue to make her feel fluttery? And will she even have the option to make that final choice, because the look of quiet dread that settles on John’s face when he opens the wooden box to find nothing at all inside may have some far reaching consequences.

“Is she even thinking about the big picture?” Genius John asks the other guys, and yes, I am committed to calling this man Genius John right now because finally – f*cking finally – someone has asked (whilst on camera) the right questions:

1. Is Kady thinking about how her choices now will impact her future?
2. This guy lives in New York and Kady lives in Texas. How exactly will that work once they no longer share a villa and have things like, oh, expenses to deal with?
3. Can she really fall in love in this teensy amount of time?

It’s the third question John poses that is my very favorite. Not only is it a fair and rational question clearly formulated by an incredibly virile genius, but it also causes Evan’s insides to knot and twist as guilt pokes at him from all sides because soon he will have to decide which woman’s heart and trust he will shatter.

Here’s a sneak preview for next week’s episode where Evan feels like he’s a monster for what he’s done:

Nell Kalter teaches Film and Media at a school in New York. She is the author of the books THAT YEAR and STUDENT, both available on amazon.com in paperback and for your Kindle. Also be sure to check out her website at nellkalter.com. Her twitter is @nell_kalter.