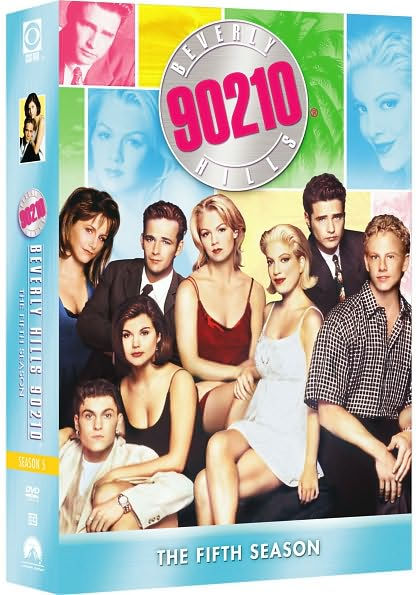 -Episode starts with one major revelation: Brandon is goatee free now. He had a full goatee in the first episode. Now he’s clean shaven. Even Steve comments on it. We’re talking “Felicity” changing her hair level of facial transformation. Ok, maybe not on that level where all of America freaked out when she dumped the perm, but still, Brandon is now goatee-less and they let him have it for one episode. Was this a production decision? Did Jason not like it? Who made this decision to only have it for ONE episode? I need an answer.

-Also at this opening scene, which is a baby shower for Andrea, Donna tells the group she will not be attending college and gonna take a semester off. Reason: she’s gonna go to Houston to practice more curtsying for the snobs. Real reason: Seeing David Silver makes her skin crawl and gives her flashbacks to unwrapped Trojan condoms. Who could possibly attend school this way?

-Dylan is at the bank and getting pissed off at the teller because he has no money. Outside he runs into Donna and her mother, who both still think he’s Mr. Moneybags and even hit him up for buying a $2500 table at Donna’s debutante ball that night. Oh nice. Haven’t seen the guy since May and now you’re asking him for $2500. KEVIN AND SUZANNE RAN OFF WITH HIS MONEY!!!!! Give the guy a break. He can’t even afford a good shave at this point.

-On campus, Josh Richland wants Brandon to be his vice presidential running mate for student council. Or whatever it’s called in college. Season 4 introduced us to Josh who was basically the gossip columnist on CU’s campus and who butted heads with Brandon every chance they got. And he wants Brando (yes, some call him that) to be his partner for reasons not really explained. Well, other than the fact that Brandon is much more popular and has a longer contract with the show than Josh Richland’s does. Smart move, Josh.

-Donna’s mom is having a pre-party before the ball and Kelly guilts Donna into quitting school and just doing it because mommy wants her to. We all know the real reason which is Donna is being a weenie about seeing David on campus, but, she’s trying to put on a good face and make it seem like she’s quite interested in being a debutante in Houston. Sure she isn’t. And oh yeah, Brandon tells Kelly he will go over to Dylan’s and tell him about them. They make out. Again. I guess it’s not such a bad thing that your daily work consisted of making out with Jennie Garth back in the day.

-We get our first scene at the Peach Pit this season as David and Donna awkwardly run into each other. Donna is with her hillbilly date from Houston who came up for her ball tonight. David is currently wearing a plaid shirt that looks like it should be laid across your dinner table. No one bats an eye. I’m disturbed.

-Brandon goes over to Dylan’s and sees that something is clearly wrong. He just woke up, it’s midday, and he’s drinking. Brandon holds off on telling Dylan about him and Kelly. He might get a bottle to his skull if he does. Oh, but doesn’t that backfire later on…

-Andrea and Jesse are thinking of putting Hannah into day care and Jesse doesn’t approve. Why? Because I can’t remember a time where Andrea and Jesse were remotely happy, every storyline they have blows, and they can never agree on anything. Other than that, they are one big happy family. Just drop her off at daycare and move on. Please. For all of our sakes. Quit sucking the life out of this show.

-Brandon is on the phone with Kelly talking about how he didn’t tell Dylan, and in walks Valerie into his room in her bra and underwear. Did we ever see anyone on this show in their bra and underwear in the first 4 seasons? I think not. Brandon is distracted as any red blooded heterosexual male would be and, well, there really was no other purpose to this scene other than to show us this is what we can expect from Valerie Malone all season long. She has an underlying sexual attraction towards Brandon, and she’s going to flaunt herself as much as she can.

-The debutante ball at the Bel Age Hotel (where Dylan used to live in high school), is now upon us. It’s a benefit for something as it’s not really explained, but there are members of the Men’s US Soccer Team, Cobi Jones and Paul Caliguri, who make cameos. Trust me, they were a big deal back then. Also enter D’Shawn Hardell (Cress Williams) from CU’s basketball team. He befriended Brandon during their freshman year and is also now friends with Donna for God knows what reason. Cress Williams later became known in high school circles as Vince Howard’s dad in “Friday Night Lights” among other roles. Was in “Grey’s Anatomy,” “ER,” “Prison Break,” “Providence,” “Nash Bridges” and a ton more. But considering this was the second role he ever had in Hollywood, he’s always D’Shawn Hardell to me.

-Donna gets on the dance floor and does the Texas Dip in her debutante dress and apparently this is a big deal and people like her stuck up mother clap and applaud her for this. Brandon and Kelly see that she’s clearly been brainwashed out of Beverly Hills and this isn’t the Donna they know. The Donna they knew almost couldn’t graduate because she got drunk at prom and won’t give it up David. This Donna wants to drop out of college and major in curtsy.

-Back at the Peach Pit, Dylan (who his half owner) with Nat (Joe E. Tata), sees Jim and Cindy Walsh having dinner and chastises them. They’re not on speaking terms because Jim, being Dylan’s financial advisor, was against him going into business with Kevin and Suzanne. Jim doesn’t know Dylan was scammed out of his money by them because Dylan hasn’t told anyone, and certainly doesn’t want to admit to Jim he was right all along about investing his money with two strangers, including Geraldo Rivera’s long lost brother. Dylan tells them they’re not welcome at his restaurant, Nat takes him outside and scolds him for being such a jerk, then asks what’s wrong with him? “Is it Kelly?…Well, you can’t blame her for going to Brandon.” Uh oh. Way to go, Nat. Now Dylan knows and guess where his drunk ass is headed now?

-Donna and Kelly are arguing in the bathroom at the benefit over what she’s turned into, Donna cries, goes outside, D’Shawn comforts her and asks her to dance. Lets just say Donna’s racist mother isn’t too pleased that good ol’ Donna Martin is “making a spectacle of herself” dancing with the black basketball player from CU at a benefit. We had some race issues in 1994 in case you couldn’t tell.

-Brandon and Kelly are now making out again because they’re like two horned up teenagers, but guess who has snuck into the benefit? Or did he actually pay his $2500 for a table and show up in jeans and cut off shirt to watch his best guy friend tonguing down his ex-girlfriend in public? Yep. Dylan. And he’s three sheets to the wind. Dylan gets in some cracks about how this must not be a physical relationship, because Kelly isn’t into that. Not anymore. Ouch. Looks like Dylan is handling being broke rather well. Drinks himself into oblivion and shows up drunk to benefits, chastises his ex-best friend and girlfriend, then smashes a wine bottle on the way out.

-Only one possible place Dylan could head after this – a bar. He goes to where Jesse works and starts railing on him for not being served. The hooker…err…nice young woman at the bar buys the drink instead for Dylan and it looks like these two have a lot in common. They both want to explore each others orifices.

-Brandon and Valerie end up chatting about Dylan. You can tell that Val liked what she saw in that bad boy and tells Val to stay away from Dylan McKay. Val listens to that instruction about as well as she listens to the wardrobe department on covering herself up this season.

-Donna and her mom are back home talking about Donna’s “behavior” at the benefit. Felice Martin: “You made quite a spectacle dancing with that basketball player…people talk.” Yikes. Is this 1994 or 1894? We were that backwards as a society where this was an issue? I guess in fictitious Beverly Hills it was. Donna tries to defend herself:

Donna: “If the sight of me dancing with a black man offends someone, that’s their problem.”
Felice: “No, it’s our problem.”

Ummmm, we’re not really progressing much here are we? Lets move on shall we?

-Kelly goes over to Dylan’s to check on him. But Dylan is wasted, has the chick from the bar over at his house, and he’s taking body shots off her in front of Kelly. I guess that’s one way to get back at an ex. Very subtle, Dylan. Kelly walks out in a huff while I’m assuming Dylan and the nice woman spent the rest of the night reading poetry to each other and debating world issues. Or they had sex. Not sure which.

-Brandon goes to Dylan’s the next morning and insists he apologizes to Kelly for the way he treated her. Dylan relents and goes to the beach house, but Kelly isn’t there, so he talks to Donna. She spills her guts to him about David and how hard it’s been to see him and wants to drop out of school. Dylan may or may not be paying attention at this point since he doesn’t give a shit about whiny Donna and her miniscule problems compared to his bank account showing zeroes and his drinking problem about to become even worse.

-The kids are now registering for classes at school, and Brandon and Kelly run into Clare Arnold (Kathleen Robertson), who is the Chancellor of CU’s daughter. Clare basically stalked Brandon all last season even though she was a senior in high school. Met him on a retreat and tried to get in his pants numerous times. Clare tells them that she’s now a sophomore like them because she took summer classes and is some sort of brainiac. All while Brandon has agreed to join Josh Richland and be his running mate as they run for student body President and Vice President.

-David and Donna run into each other as well. David asks if she forgives him, she says no, it just means it’s a big campus, and Donna still can’t put on her big girl panties and get over this David thing. His earrings and oversized clothes and I guess his crabs aren’t enough of a deterrent for her. Anyway, she was supposed to meet Dylan at registration from when he came over the other day, but since Dylan is spiraling out of control, the show ends with him drinking at the pool hall. A sign of things to come for Mr. McKay. And those things involve drinking, sex, and drugs. Buckle up.