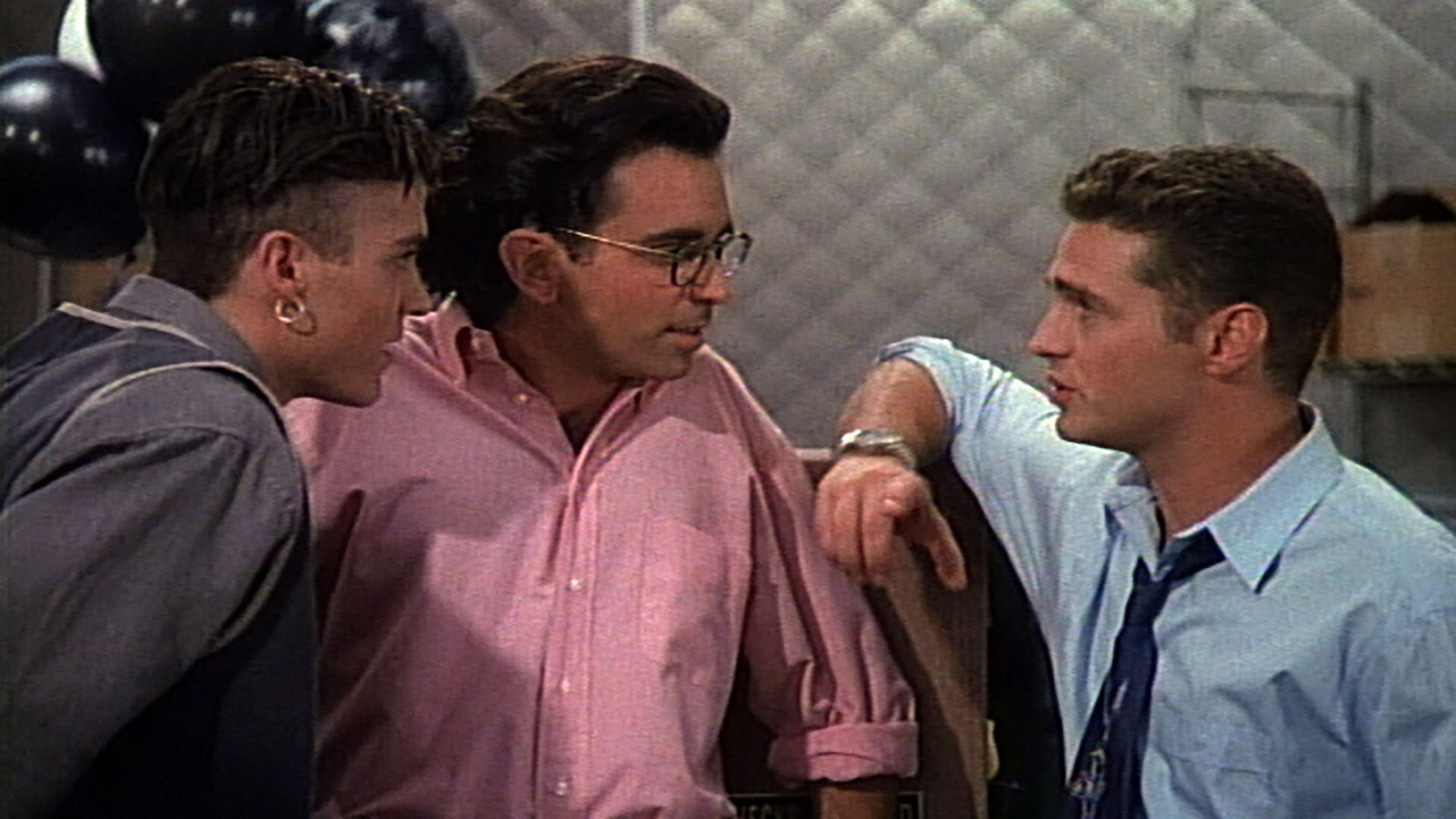 I know I’ve said this a few times, but I can’t tell you how much I’m thoroughly enjoying re-watching and recapping “Beverly Hills 90210” right now. It’s killing time, it’s taking my mind off what’s going on in the real world, it’s nostalgic, and it makes me see things this time around that maybe I didn’t see or realize the first 10 times I watched the college years. Along the same lines, tomorrow’s podcast guest is producer Larry Mollin, who produced all 128 episodes of 90210 during the college years. He started working on the show freshman year of college and left the show right after graduation. Can’t wait to talk to him and dive deep into what it was like writing for a hit show like this for 32 episodes a year. I’m sure he’s got some great stories. And the fact that he only wrote for the college years, which clearly are my favorite, makes it even that much better. Set to record with him today, so, it’ll be up tomorrow. Having read some past interviews with him, I have a feeling he’s gonna provide some excellent insight into what life was like back then. So look forward to that coming tomorrow for you.

-We start with Val in the Walsh’s garage going through a box of Brenda’s old stuff. Couple things of note: Were they basically going for a “Single White Female” thing here where Val was basically going to try and BE Brenda, then moved away from it? Also, in case you didn’t notice, one of the big trends in the early 90’s was high riding mom jeans where you let your button unbuttoned. Very cool back then. And in the case of Valerie Malone, quite appropriate.

-Brandon and Josh Richland are starting their campaign for President and Vice President of CU. People all think Brandon is the Chancellor’s lackey because he was on the President’s task force team last season. And basically he is because Brandon gets everything he wants in life. I gotta say looking back on this show, Brandon Walsh is basically what every guy aspired his high school and college life to be like.

-Clare is now roommates with Kelly and Donna because Donna met her and liked her, yet didn’t know the whole deal last year when Clare was all over Brandon. But Clare says she’s over Brandon, it was a phase, and she’s not interested in anymore. Just wait, it’s only a matter of time before she’s horned up for someone in this incestual group. That’s coming in 3…2…1…

-Brandon is lobbying for D’Shawn Hardell’s vote in his student cabinet run, but D’Shawn needs to stay neutral and vote with the group he already backs. There’s a reason they gave us this scene and it wasn’t to show us that black people actually did hang out in the Peach Pit. Or maybe it was? Oh wait, in upcoming seasons Willie the Cook has a son or nephew who comes in with his friends who, shall we say, might have an issue with the white musical act at the PP After Dark. Which ended up bringing us the phrase, “Squash That.” We’ll get to that episode next season.

-Guess what? Andrea and Jesse are fighting again. Andrea wants to support Brandon in this vice presidential run, but she feels Brandon doesn’t care or ask for her opinion anymore since she’s a mom. I cannot wait to talk to Producer Larry Mollin for tomorrow’s podcast and ask him how hard it was to write for Andrea and Jesse. What a mess their relationship was. I’m assuming because Gabrielle was pregnant in real life, they had to make that her storyline, but geez, nothing Andrea and Jesse do together seems normal or happy.

-The debate at school happens and Josh Richland can’t make it because he’s having car issues. So Brandon has to speak for both of them on the independent ticket and knocks it out of the park. Everyone cheers for him as if he’s f***ing FDR or something addressing the nation. Whatever the case, you pretty much knew after the this scene where the vote was headed in that race.

-Valerie decides to show up at the pool hall where Dylan spends all his free time boozing and hustling other poolers. Doesn’t tell him her name, nor mention anything about her living at the Walsh’s. You know, kind of a sore subject with Dylan right now. But you know what she does tell him? “I want a man to ache for me.” Oh yes you do, Val. Yes, you do. Steve Sanders currently has blue balls from hanging out with you so much and you barely giving him the time of day. Val is basically all the women that love the bad boy, even though the can’t possibly offer them anything worthwhile. She’s no doubt in her bad boy phase and, well, we know how that ultimately ends.

-Val ends up coming home late and lies to Cindy about where she was since the Walsh’s would rather hear Val did a line of coke off a male stripper’s abs than hear she played pool with Dylan McKay. Val is good at lying. Val is good at many things. Making Dylan sweat is at the top of that list right now.

-In the “We Need a Storyline for Kelly, Donna, and Clare” this episode – Clare snores. And it keeps Kelly and Donna up at night. Wonderful. So how do we fix it? Clare says she only doesn’t snore when she’s in bed with a guy. Are we…can we possibly…yes, we’re headed there.

-Dylan is at the Peach Pit and complaining about how much it’ll cost to get a new air conditioner. He sees Steve and Steve tells him about this new girl he met (Valerie) and Dylan does too (Valerie). But neither know they’re talking about the same girl. Only thing Steve told him was that “she lives at the Walsh house,” and Dylan basically sees the Walsh’s as the devil reincarnate now, so he doesn’t care to hear anymore. But he will soon…

-Alex Diaz is a Latino on campus who approaches Josh and Brandon telling them to drop out of the race. If not, at the next board meeting, he’s going to bring up allegations last year of Brandon taking tests for D’Shawn Hardell so he could pass. Josh was working on the story last year, but decided not to run it because he didn’t have proof. Well, now their opponents got a copy of the story that never ran, and want to basically blackmail Brandon. Because blackmain in politics NEVER happens. Hey now. Maybe this show was ahead of its time after all.

-Donna goes and talks to D’Shawn before the meeting where this story is gonna be brought up to see if she can help Brandon. D’Shawn ends up breaking into the meeting saying he met his academic eligibility all by himself and didn’t need Brandon’s help. So whatever story they’re looking to run is not true. Exactly what Josh said. So much for Alex Diaz actually fact checking before trying to slander an opponent. It’s like they think in politics you can just say stuff about your opponent without any basis for it and get away with it…

-Val is back in the pool hall with Dylan for a second time, and now, we’re getting frisky. Val to Dylan: “Is that a cue stick or are you just happy to see me?” You know where this is headed. In the next scene, they are sweating in bed seemingly having just made whoopie and you know what Dylan says to her? “Where did you learn that trick?” Holy smokes, are we allowed to say this at 7:45 on Fox TV in 1994? Did they just insinuate that Val is an acrobat in bed? Our little Kelly Kapowski is now having one night stands with college dudes she just met at a seedy pool hall? What is 1994 coming to?

-Donna finds a solution to Clare’s snoring: she buys her an inflatable doll. Yes, we just had a steamy post-coitus sex scene and now an inflatable doll within minutes of each other. My virgin eyes cannot take this.

-Because Dylan is such a gentleman, instead of having Val pack her shit and find her own way home, he takes her home – to the Walsh’s. He still doesn’t know her name (I don’t think), but knows she’s the one living in Brenda’s room and is the one Steve has eyes for. Feels he’s being set up and is not happy with her. Val? Happy as a clam and continues her seduction of Dylan McKay even after getting dropped off. Again trust me, this was a HUGE deal in 1994.

-Everyone is at the Peach Pit for the voting results. Josh and Brandon can’t bear to listen for the results, so they escape outside. Although, how are they gonna hear the results at the Peach Pit? There was no internet back then really. Nor did everyone have cellphones. Whatever the case, not the point. The point is Josh says he needs to run somewhere and he’ll be back in twenty minutes. Or never. Right when Josh leaves the parking lot, apparently he didn’t see a giant garbage truck and it plows into his car and kills him. Brandon is devastated. The episode ends with everyone rushing outside seeing the crash and then Kelly telling Brandon he and Josh won the election. Cliffhanger…