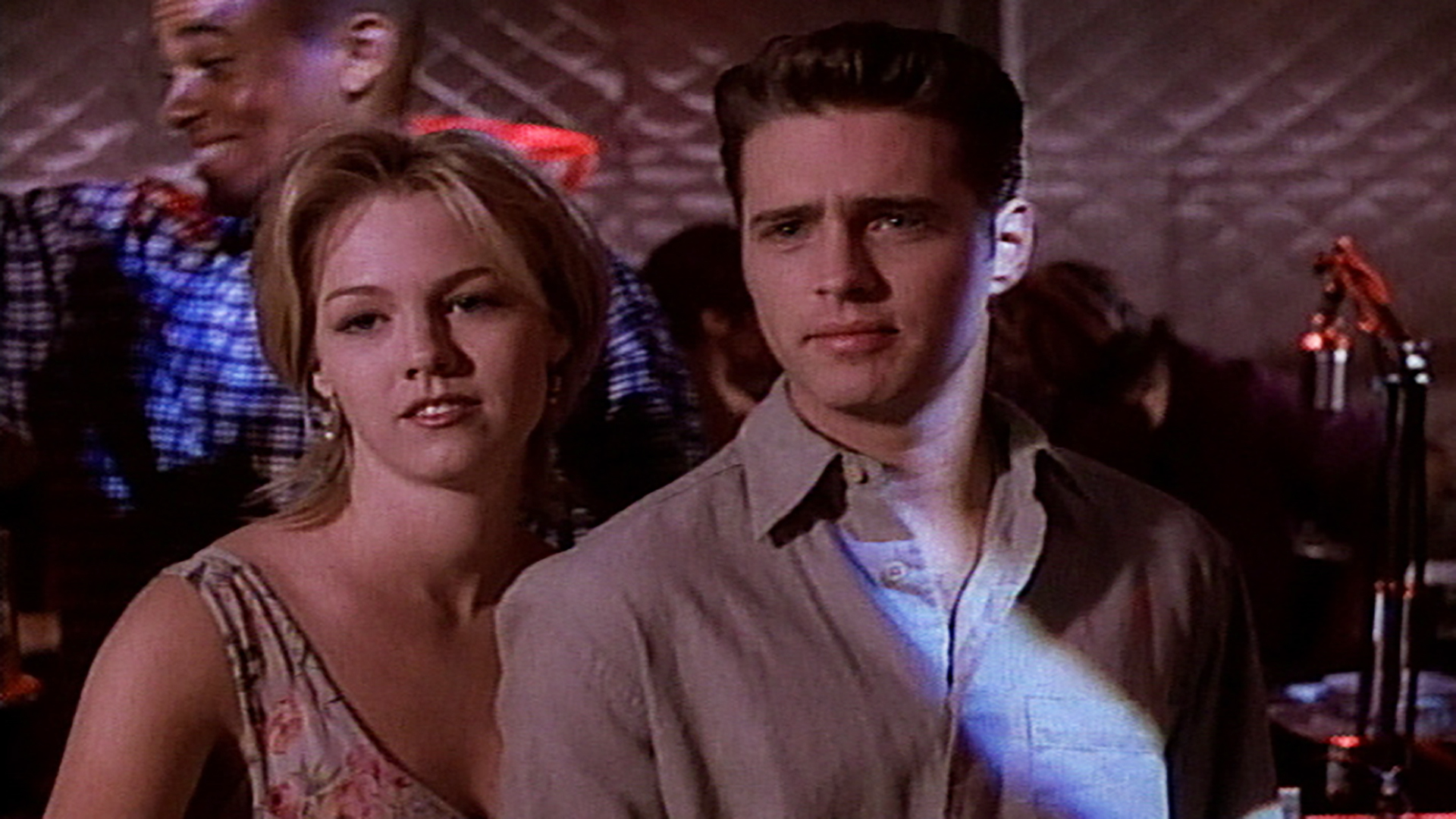 Back again continuing your 90210 recaps with episodes #5 & #6 today. Two interesting episodes that couldn’t be more different as you’ll see. Tomorrow I’ll have a “Reality Roundup” column to go over things happening in Bachelor Nation, along with my thoughts on some other shows going on right now in reality TV. In case you missed this past Sunday night, I did an IG live with Ashley Spivey that’s going to be a weekly thing moving forward for the time being during this virus shutdown. Every Sunday night at 8 ET, Ashley and I will go live to talk about whatever questions you may have for us, along with what’s been going on in each other’s lives which, lets face it, isn’t much since there isn’t much to do right now. So we’ll take your questions on whatever if you’d like to join in. In addition, if you want to be part of the “He Said, She Said” podcast, that’s still happening as well, so contact me and let me know what your issue is, what time zone you’re in, and the best time for you to record and we’ll make it work. Clearly Ashley’s schedule is a lot more free now so most nights we’ll be able to do it. Email me at steve@realitysteve.com if you’re interested in being on a future episode. Now, lets get started with the recaps shall we?

-I have such a deeper outlook on the show now having spoken to Larry Mollin on the podcast last week. Check out Episode #175 for a lot of good behind-the-scenes stories from the college years where he produced all 128 episodes and wrote a lot as well. Such a great guest. With this downtime in “Bachelorette” land, I hope do more scripted TV stuff of some of my favorite shows. Would love to talk to writers/directors, etc. As I’ve always said, even when it comes to Bachelor Nation, I’m so much more interested in the HOW than the actual finished product.

-We start this episode with Kelly in Brandon’s bathroom, I’m assuming after a long night of steamy, passionate, missionary sex. Sorry. That’s just how I vision these two. Anyway, in the bathroom (which we know he now shares with Val), Kelly smells pot. She tells Brandon, and of course because he thinks Val walks on water, he thinks nothing of it. Oh Brando. Is her bra and underwear scene still embedded into your brain? It is mine. You’re forgiven.

-David, Clare, and Donna are making a campus video that David is titling “The Search for Intelligent Bimbos on Campus.” Verrrrrry progressive, David. Why not just set up cameras in the women’s bathroom while you’re at it. After Donna leaves the room, Clare kisses David and now it’s officially on between them.

-Steve and Brandon are talking about how Val kissed Steve. But Steve needs more. You see, because Steve Sanders is a horn dog in case you haven’t been paying attention for 4 + seasons. The next scene cuts to Val showing up at Dylan’s while he’s on the phone, he gets mad momentarily of her showing up unexpected, she turns on the sex appeal and they start doing it right on his kitchen table. Might’ve been a record for shortest amount of time Dylan was mad til when Dylan became fully erect.

-Kelly now is being Snitchy McSnitcherstein and tells Donna that she thinks Val is a pot head. Yes, she is. And Beverly Hills is losing their mind over it. When’s the intervention? SPOILER ALERT: Oh wait, that’s coming with Dylan.

-Clare and Donna are filming their video on campus. Basically walking up to dumb jocks and having them answer a question where their answer is either “stud” or “muffin” or “love,” then they’re gonna edit it altogether and have it be the opposite of what David wants to do with his video. This was humor in 1994.

-While walking around campus, Donna sees one of the construction workers and goes up to him to be a part of the video. It’s Ray Pruit! Oh boy. Buckle in for the enigma that is Ray Pruit everyone. This is gonna get good. Ray says he’s working but to come back later. Donna is smitten. Ray is eyeing his next victim. Sort of.

-Kelly and Donna at the Peach Pit, Kelly sees Dylan for the first time since he was taking body shots off the skank from the bar. She tells Dylan she bought Eric something from Minnesota this summer, and that just reminds Dylan he has $.14 in his bank account and that Kevin and Suzanne ripped him off. None of the gang knows this still.

-Back on campus and Donna goes back to meet Ray. She starts filming him, asks him at the beginning of a tennis match, what’s the score, Ray says “love love,” Donna thinks it’s knee slapping hilarious and Ray thinks she’s setting him up. Says he doesn’t want to participate in her stupid video and walks off. You go, Ray! Stand up for all the other dolts on campus who couldn’t remotely pick up on what Clare and Donna were filming with them. When Ray Pruit is outsmarting you, you must be a complete moron.

-Time for the Wet Blanket Party. Andrea and Jesse want a date night, but they’re having problems finding a sitter. Andrea complains Jesse is out all the time, but since she’s not working, he needs to provide for the family. Their relationship is a disaster, neither of them like each other, Jesse was miscast, and Andrea needs to get to the laundromat sooner rather than later. You’ll know what I’m talking about in a couple episodes.

-The nightclub is happening at the Peach Pit. Steve is working the door charging $10 a head, and they’re rolling in the dough. Everyone who responded to the casting call, errrrr, flyers passed around school are waiting in a line forming outside. What a cash cow this is gonna be! Oh wait, Steve needs Dylan to take over letting people in, and he starts pocketing some of the money. Val sees this and tells him that’s wrong, which shows that Val does have a little integrity.

-Clare and David and Griffin and Donna are dancing at the club, while both staring each other down. Someone spills on Kelly, who then runs to the back to get a towel, where Dylan is necking with Val. Yes, I used necking because I’m running out of ways to describe these two all over each other. Kelly can’t see it’s actually Val, but does see her from the waist down and the heels she’s in and deduces it can only be her as Dylan yells at whoever’s at the door to get out of there. Kelly’s suspicions are proving to be true. Val is a pothead and now a maneater!

-They skip to later that night and Steve realizes they’re $300 short after counting people. Kelly tells Steve what she saw in the back room and Val admits to it but lies and says that Dylan was drunk and hitting on her. She didn’t know what else to do. Apparently kicking him in the balls wasn’t the reaction she went for, but when you’re lying through your teeth so as to not piss everyone off, you come up with “Yeah, Dylan was drunk so I let him all over me.” Makes sense.

-On campus, David and Clare are editing the video of all the guys saying stupid shit on camera, Donna walks in and sees the footage of Ray saying “love love” on a loop and tells them not to use it. But says they can still use Griffin’s footage. Uh oh. Someone feels bad for the new bad boy in town. Awwwww, a soft spot for Ray. If only Donna knew where that would get her, she might’ve cut her losses right there and ran the stupid video with him in it.

-At the Walsh house, Val is talking to Jim and says that it seems like Dylan needs money. Jim, still unaware of what happened with Kevin and Suzanne and Dylan being swindled doesn’t believe it. But tells her to also stay away from Dylan McKay. Hey, that rhymes.

-Donna back on campus looking for Ray, and this is where we have our first scene that was clearly cut because of copyright issues. I remember this episode back when I watched it, when Donna walked up, Ray was playing his guitar and singing a song. Probably “How Do You Talk to An Angel” but it might’ve been something else. Anyway, on this version, all you see is Ray finishing up whatever he was singing as Donna walks up, apologizes for the video, and invites him to the Peach Pit later that night. And oh yeah, she finally learns his name is Ray Pruit. “One ‘t.’ That’s all my mom could afford.” Well that and a bottle of jack.

-Andrea has decided she’s gonna pawn Hannah off on Jim and Cindy, which then gives them baby fever. Jim and Cindy talking about baby making makes my skin crawl. Please don’t. I’m serious.

-At the Peach Pit, Ray shows up and sticks out like a sore thumb being with all these richies and dances with Donna. Griffin sees them from a distance and is a bit jealous. Again, more awkward 90’s dancing at a diner that is now a club. I actually forgot that the first iteration of the “Peach Pit After Dark” was actually IN the Peach Pit where the kids ate. Yeah, probably not a great idea.

-Kelly and Brandon are fighting over Val. Kelly is onto her and Brandon is defending her. Don’t worry, this only goes on for another 5 seasons pretty much.

-Andrea drops by Doheny after dropping Hannah off at the Walsh’s to surprise Jesse. What does she see? Jesse flirting with women at the bar to get bigger tips. Yep, that’s the way it works in the ol’ bartending industry. Deal with it, Andrea. Or maybe think about that before shacking up with a bartender you met at a Walsh party and didn’t use protection. Bad girl.

-Episode ends with, whaddya’ know, Val is back at Dylan’s place and he’s drinking. He tells her his money is gone, somebody stole it and left. Now, the cat’s out of the bag. How long before you think Val spreads the word to the whole neighborhood that Dylan is broke? If you guessed .5 seconds, you win.