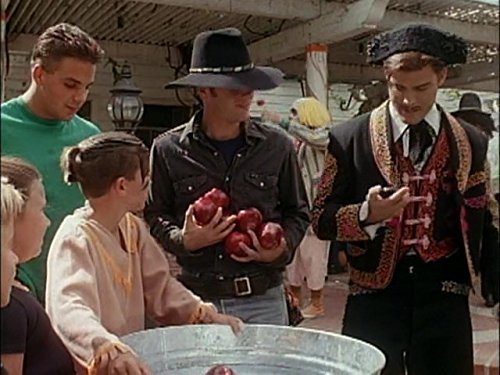 I know it’s been a couple weeks, but we’re back with your 90210 recaps. At least 2 episodes a week I’ll be covering, if not 4. This season is starting to heat up. Mostly because Valerie Malone is on fire. Basically, she’s been there two months and everyone is turning on her already because she’s sleeping with Dylan behind people’s backs. Not the best way to integrate yourself into a new environment, I’d say. But hey, she’s Valerie Malone and she can do whatever she wants because she’s now the queen of this show. Talk about a shot in the arm after Brenda left. Maybe shot in the arm wasn’t the greatest term to use considering the downhill slide Dylan is on right now. His literal shot in in the arm is basically coming in episode #9. Don’t do it, Dylan. Especially when it’s Uncle Rico giving it to you. I loved the cameos we had on 90210. How many multi episode arcs we got from people who went on to fairly decent careers, or became character actors. This was definitely one of them. Dylan’s drug dealer at the pool hall ended up being from the Dharma Initiative in “Lost.” So sit back, relax, and enjoy episodes 7 & 8. Back tomorrow with “Listen To Your Heart” episode 2 recap.

-We begin with a rager at the Peach Pit. However, Steve not being the sharpest knife in the drawer, didn’t account for the fact that there’s something called a max capacity, which he cleared by hundreds if I had to guess. The fire marshall comes in and shuts it down. The gang thinks they need to keep this going, so they’ll rent out the rug store next door. Val suggest asking Dylan for help since, you know, he has all the money. And she’s been schtupping him behind everyone’s back.

-Ray brings Donna pumpkin as Kelly goes into full bitch mode and side eyes him saying “I don’t know what you see in him.” You know what Kelly? Stop being such a judgmental beyotch. Maybe Ray works at a pumpkin patch, is low on musical talent, has a drunk for a mother, and probably has $17 in his bank account to go along with a horrible temper that’s yet to rear its ugly head, so why don’t you…on second thought Kelly, you nailed it. Sorry. Continue.

-Dylan agrees to the lease for the Peach Pit next door even though he currently can’t rub two nickels together since Kevin and Suzanne are partying down in South America with his money and half sister he found out about last season when Suzanne showed up saying she bopped Jack McKay back in the day and he left her with a daughter.

-Kelly’s mom Jackie is now modeling again as she’s been asked to pose in a magazine for their “Fabulous at 40” campaign. If Jackie is 40, I’m 15.

-Jim needs to sign off on Dylan investing in the rug store but Val tells them Dylan is broke. This is the first he’s heard of it and the ball has started rolling on, “Oh shit, no wonder Dylan is back to being a drunk and about to start shooting heroin in his veins.”

-Kelly sees Mel and he informs her that Jackie’s modeling is actually a mother daughter shoot she’s doing with Erin. Kelly is curious as to why she didn’t ask her, you know, her older daughter who’s actually modeled before to be in it. Tensions rising with the Taylor’s. What else is new? I guess this is better than Jackie doing blow and trying to emcee a fashion event.

-Griffin shows up at the beach house to surprise Donna and she tells Clare to cover for her if Ray calls. Griffin does his best Pilot Pete impression and takes Donna on a plane ride. Ray shows up while they’re gone and Clare is a horrible liar so she just tells Ray Donna is on a date. Wow. Doesn’t take much to break Clare, does it?

-Dylan is at the Peach Pit with Nat who takes him to the back. Jim Walsh is waiting and Dylan realizes he’s been outed. Jim asks about Suzanne and Kevin and Dylan says the money is gone and Jim is probably thrilled that he ended up being right. Well yeah, but he doesn’t say it publicly. Just further proof that Dylan handles his money about as well as a 4th grader.

-We get to the kinky part of the episode. David and Clare in his bedroom, changes his shirt, but finds handcuffs in the drawer, so he handcuffs himself to the bed for Clare. She walks in all horned up, but then says those aren’t her handcuffs. She has no idea where the key is. At that moment (because of course timing), Clare’s dad shows up at the apartment wanting to just “look around.” Clare throws all the clothes over David on the bed so he can’t be seen, dad leaves, she tells David she called the locksmith, yet, David is chained to the bed, so who’s gonna let the guy in. These people are not rocket scientists.

-Griffin and Donna now at dinner after their plane ride and Griffin makes a crack about wanting an “overnight date.” Donna is pissed, realizes Griffin is such another KEG House perv and the second coming on John Sears, so she’s pissed now that she bailed on Pumpkin Patch Boy Ray. She shouldn’t be.

-Brandon has a talk with Val about going easy on Steve and not to lead him on saying if she wants Dylan, she needs to dump Steve. But she needs to be careful because Dylan is in a downward spiral. Val doesn’t care. Because sex.

-Donna comes home from her date and sees David handcuffed. Hilarity ensues. In the 2nd episode of the season, she was thinking of taking a semester off because the thought of even seeing David made her vomit. Now she can see him handcuffed to a bed for a night of raunchiness with Clare and just laugh it off. Oh Donna. How much we’ve grown in 5 episodes!

-At the modeling shoot, the coordinator pulls Kelly aside telling her SHE should be modeling. Kelly wants to know why her mom didn’t ask her to join the shoot.

-David tells Donna Ray stopped by. She walks outside and Temper Boy reveals his first big temper of the season as she sees he’s smashed the pumpkin he gave her all over their deck. Ray mad. Ray smash. Me have maturity of 4 year old.

-Val is at Dylans because, where else would she be? Dylan is being his charming drunk self after Val tells him “I’m not Brenda,” he responds “No, you’ll never be Brenda” making Val cry and now we see she has real emotions.

-Donna feeling guilty for going on a plane ride with a guy who has 100 more redeeming qualities than Ray, shows up at the Pumpkin Patch to apologize to him. Donna: “Does that mean you forgive me?” Ray: “I would never push you into anything you didn’t want to do Donna.” Oh, the amount of irony dripping from that sentence is pretty rich.

-Kelly looking at old modeling photos of herself with Jackie. Jackie says the shoot didn’t include Kelly because she didn’t want to be a grandma. Kelly thought it was because she wasn’t pretty enough. Oh didn’t think that Kelly. You’ve been told you’re pretty your whole life by everyone you’ve come in contact with. Throw me in that mix. You should’ve been in the photo shoot because you’re hot.

-Steve and David go over to Dylan’s. They see Val is there and Steve punches out Dylan because, yet again, Steve Sanders doesn’t get the woman. And drunk, down on his luck, has-nothing-going-for-him-at-the-moment Dylan nabs the hottest girl on the show, who just happens to be Brian Austin Green’s girlfriend in real life at the time. Fun times. “Good news Brian, we’ve cast your girlfriend Tiffany on the show. Bad news is that she’ll be hooking up all season with other men. And then you’ll be broken up by the time we decide to make you two a couple on the show.”