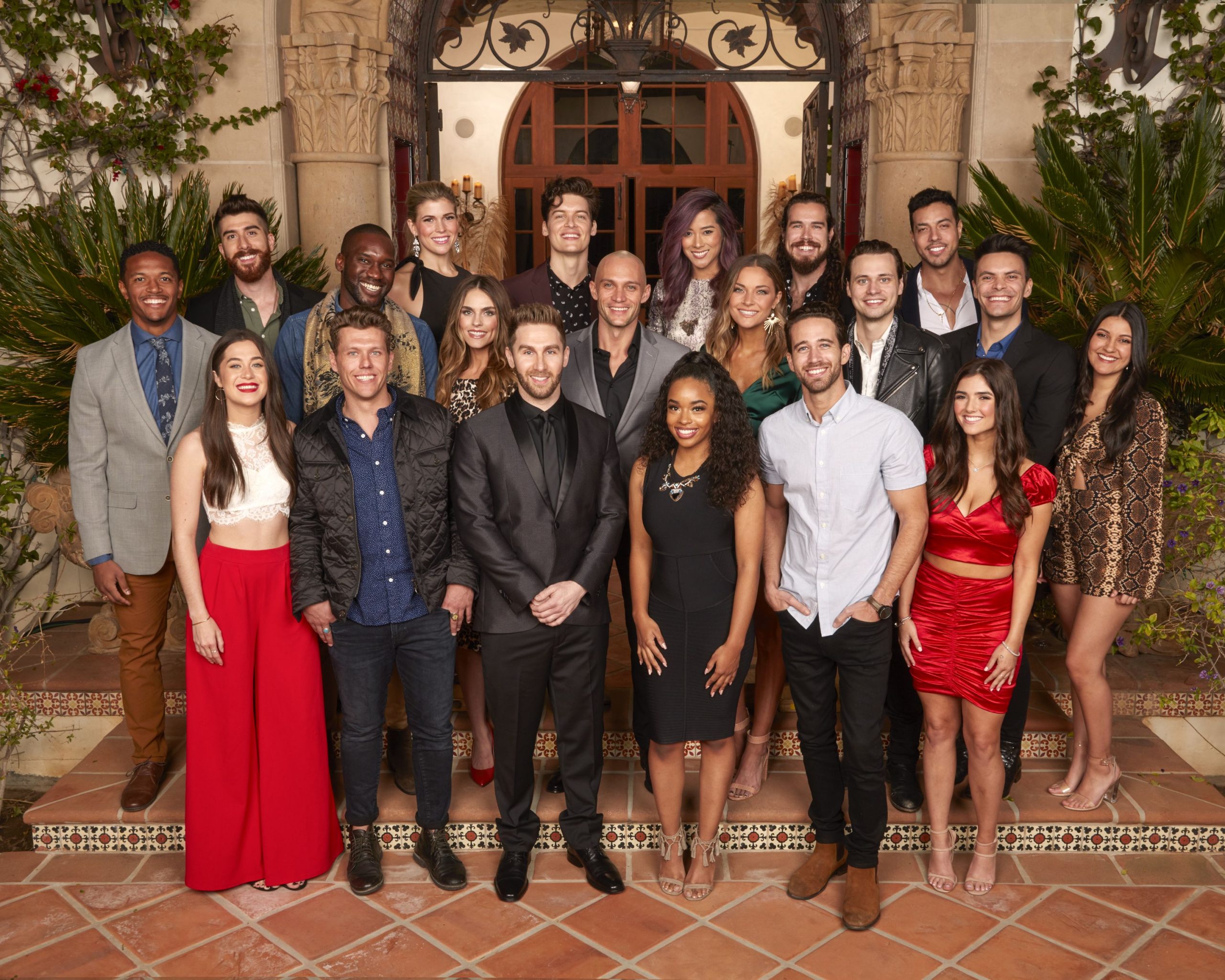 Heyyyyyy, look at this. A column. I know, it’s been a minute hasn’t it. You know, there just really isn’t a whole hell of a lot to talk about during this offseason. At least on a daily basis. The 90210 recaps will return at some point, but I got backed up for the time being, which is why you haven’t seen any in a couple weeks. Today I’m gonna discuss some things regarding “Listen To Your Heart,” and what a shocker, it revolves around Trevor. Also the new programming the Bachelor is beginning to air on June 8th in case you haven’t heard. And this week’s podcast guest has nothing to do with the “Bachelor.” Or even reality TV for that matter. However, it’s one of my favorite ones ever. If you’ve followed me for any amount of time over the years, you know I’m a child of the 80’s. Pretty much most of my favorite movies were from the 80’s, from all the brat pack movies, to the “Karate Kid,” “Ferris Buellers Day Off,” and the “Back to the Future” trilogies. Well lets just say tomorrow’s podcast is an hour long geek out about one of those things with someone who’s just as obsessed with I am. So much fun talking about one of your favorite movies with someone who has just as much passion and love for it as you do. So much so, that they may have even written a book about it. I had a blast talking to them about it and you’ll hear it tomorrow.

“Listen To Your Heart” has its finale next week and, well, that’s probably a good thing. Do I think the show is terrible? No. But there’s nothing about this show that is remotely out-of-the-box or something I wasn’t already expecting. This is exactly the show I thought I was gonna get when the producers of the “Bachelor” tried to put together a dating/singing show. Forced drama, no real point to why things are the way they are, and unnecessary plot lines. Some of them are really good singers (Natascha and Rudi) and some of them are acting their ass off (Trevor). I definitely think a few of them we’ll see on a future season of Paradise, no doubt (Jamie, Natascha, Trevor for sure).

Lets be honest, Trevor & Jamie are the least talented duo of the four couples that were remaining heading into this past Monday’s episode. And it’s really not even close. Not to say they can’t sing or aren’t talented, but just compared to the other three, they were at the bottom. I mean, how can you even compare someone like Jamie to Natascha when Natascha is 10 years older, has way more experience, has sung on a much bigger stage, and is established in her career. It’s almost unfair to Jamie to put her on a show like this when she’s 21 and still very early in her career.

Yeah, Natascha and Ryan had a weird set that looked like someone screwed up the arrangement, but again, I get the sense that had more to do with the show than themselves. It’s hard to buy what the show is selling when we know they have an agenda for everything they do. You can’t tell me each judge wasn’t prepped beforehand about which couple was which, what their storyline was, etc. That’s just not the way this show works. Hell, even on the “Bachelor/ette” they give judges/guests a heads up on who the “characters” are on the show and act accordingly. Which then makes any “judging” being not just not completely on the up and up. I just don’t buy it.

And speaking of not being on the up and up, a reader pointed something out to me regarding Trevor and again, I begin to question things. Here is an #ad post that Trevor did last October for the Hummingbird Nest Ranch in CA – where “Listen To Your Heart” was shot:

I don’t always drink wine, but when I do I prefer @kieuhoangwinery . #ad The good people over at @hummingbirdnestevents have become close friends of mine. Can’t thank them enough for all that they do for me ????who wants to come drink some wine and ride some horses with me? ??

Once I saw that, I started to do a deeper dive on Trevor’s ties to the place where this show was shot. Here’s a picture from last May: 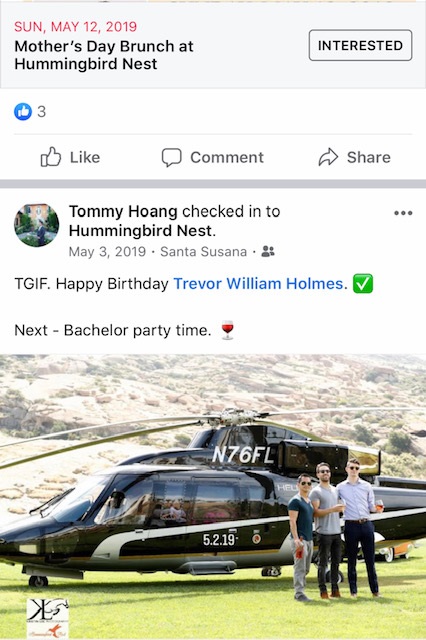 Tommy Hoang is a co-owner of the Hummingbird Nest Ranch along with his dad, Kieu, a Vietnamese-American billionaire who bought the property in 2015:

And more pictures clearly showing Trevor and Tommy are pretty close. Tommy getting Trevor to perform at the ranch, throwing birthday parties for him, etc.

The optics of it don’t look great. You know who isn’t boys with the guy who co-owns the resort where this show was shot at? EVERY OTHER CONTESTANT THIS SEASON. So, just something I wanted to point out. This show has a hard on for Trevor and I’m still trying to figure out why. I don’t think for a second that Trevor being boys with Tommy Hoang, who again, co-owns the resort most of the show was shot at, was pure coincidence. Call me crazy.

The other thing you saw this past Monday night was ABC’s official announcement that beginning on Monday, June 8th, they are going to replay old seasons of the show every Monday for a couple months. Yes, that means each Monday night beginning on the 8th, will be a past season of the show condensed into 3 hours. Here was the promo they rans for “Bachelor: The Greatest Seasons – Ever!”:

Bring on #TheBachelor: The Greatest Seasons – Ever! ??? The journey begins (again) on June 8 at 8|7c on ABC. pic.twitter.com/Yc4NeSuEtl

They haven’t specifically said which 10 seasons they’re gonna run, and I don’t know if the season clips shown in that promo mean we will definitely be seeing those seasons, but you can absolutely be assured that these seasons will be part of the 10:

Those are guaranteed. Sean is the only “Bachelor” season where the lead is still married to the final woman he chose, so it’s a given we’re getting his. And you’d think they’d show every season that still has a successful couple at the end, which would mean along with Sean’s, you’d get Trista, Ashley, Desiree, JoJo, Becca, and Rachel’s seasons. But I have no idea what they’re thinking. Ben Higgins season? Really? I know he’s their golden boy, but considering are they not only gonna show these seasons, but these episodes will include updated interviews with some of the people involved, kinda awkward to have Ben’s season, no? Trust me, there hasn’t been a season of this show that I’ve had more podcast guests from than Ben Higgins’ season, so I’m certainly not against his women at all. I enjoyed his season and his women. But for the purpose of re-showing it? I don’t get it. Why?

The main focus of Ben’s season was him declaring his love for both of this final women, JoJo and Lauren. Well, JoJo is now 3 years engaged to Jordan. Lauren is married to Chris Lane. And Ben is engaged to Jessica Clarke. Are these three really interested in talking about this season from 4 years ago when their life is completely different now? I don’t know. I just think there are better seasons for them to cover than Ben’s given where people are at now. But then again, I don’t know what they’re going for with these re-airs. To just introduce people to past seasons regardless of how good they were, or, to show all the success stories of this franchise? I guess we’ll get a list of all the season they plan on re-airing soon. Once it comes out, I’ll be sure to relay it.

If you’re a fan of 80’s movies, be sure to check out tomorrow’s podcast as I do a deep, and definitely nerdy dive into one of my favorites from that era. It’s a lot of fun.