Here we are, 4 weeks through Michelle’s season airing, and now after last night, we’re down to the final 3 on Clayton’s season as the final 4 rose ceremony was last night at the mansion. Not to mention, Jesse Palmer posted a pic on his IG stories this morning on a plane again. Everyone’s headed to Iceland today for overnight dates and final rose ceremony. And still no “official” announcement that Clayton is the next “Bachelor.” Well, we did have Jesse Palmer’s IG post a couple weeks ago that was the two of them and it was hashtagged #Bachelor. But nothing from the network on who it is, nor anything about how the next season AFTER Clayton’s will also be another “Bachelor.” Or even why they’re doing it that way. I wouldn’t wait on any sort of answer on that one. They’ll just announce it and that’ll be that. This show doesn’t any answer real questions their fans have as to why they do things, so I wouldn’t expect them to all the sudden start answering.

Oh yeah, Fleiss did tweet this out last night: 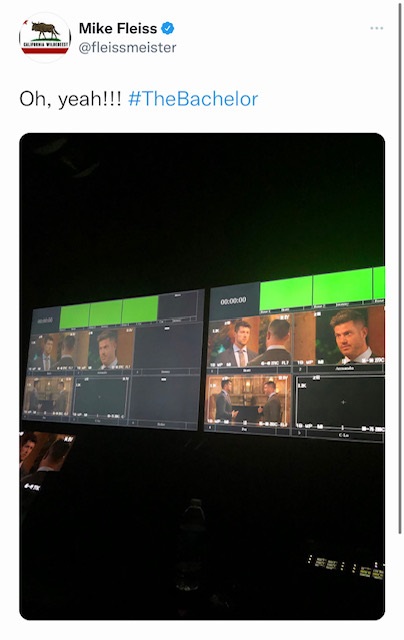 Then within the hour had already taken it down and posted this:

That was footage from last night’s rose ceremony at the mansion. It’s only been 12 hours since that happened so no, I do not know who got eliminated yet. Although I have my suspicions based on what I’ve heard throughout the season. Filming should wrap next weekend, either Friday or Saturday, then I suspect that’s when we’ll get some sort of announcement from the show that Clayton is the “Bachelor,” even though it’s the worst kept secret ever. I mean, is it even really a secret? I don’t think so.

Lets get to last night’s recap shall we?

-We start with Martin’s 1-on-1 and they go to the BMW Performance Center to do some drifting. Martin shows up, some crazy ass person is driving like a maniac on the track, high speeds, drifting like drifters do (like I have any clue about drifting since I haven’t seen 3 seconds of Fast and Furious movie and could not care less about cars) and Martin is impressed. We come back from commercial break and Michelle gets out of the car to tell him what they’re gonna do today. Were we really supposed to believe Michelle was racing at high speeds drifting the best drifting she could do? Or was it that pro dude. Sorry, the Kansas/Mich St game was on in the background and I may have been looking up at that point. I think they wanted you to believe Michelle is some Fast and Furious stunt woman, but anyone that knows how TV works know there is zero chance Michelle was behind the wheel there when Martin was waiting for her.

-Is that really Martin’s look? Is he really going with the shaved lines in his head and the shaved eyebrows, or did he lose a bet? Or did production put him up to this and told him, “Also, frost your whole head to. Complete the look.” The only cool person on the planet to ever shave lines in their head and eyebrows is Vanilla Ice. And don’t you dare say he wasn’t. The guy made a movie, which he starred in, about himself basically called “Cool As Ice.” If you haven’t seen it, you have a problem with yourself. Go rent it. Now. You will not be disappointed. And this was the opening scene:

I mean, 643 thumbs up and only 14 thumbs down in the reviews. I’m sorry, but in 1991, this guy was the coolest mf’er walking the planet. Don’t @ me. As I’ve always said, “Find a woman that’ll watch Cool as Ice with you then marry her.” Or something like that.

-After drifting on the track, Michelle and Martin do exactly what you’d expect two people to do after racing on a hot sunny day at the track – hop in a makeshift hot tub on site. Par for the course for this show. It’s here where Martin has the ultimate of brain cramps and decides to for whatever reason bring up the Jamie drama from last week saying that he doesn’t think he’s that bad of a guy, Michelle made her decision, blah blah blah. Probably one of the most idiotic things you can do. Martin, she sent Jamie home EARLY last week because she felt he wasn’t being truthful. Why is that guys name even coming out of your mouth during this seemingly moment of intimacy in a hot tub? Do you not know how this game works? Horrible, horrible move on his part, Michelle is completely put off by it, but they still have the night portion of the date to attend to where I guess she’ll make up her mind whether or not he’s a complete moron or just mildly acted like one on the date.

-At dinner, Martin I guess redeems himself by telling her he’s very blunt, he’s learning to be better at that, and he didn’t mean anything by what he said earlier. “I’m not always good at communicating.” You could say that again Martin. You’re also not Vanilla Ice, so you’ve got that major strike working against you. “I don’t cry.” Jesus man, just shut up while she’d in the midst of forgiving you. That’s not a good thing that you can’t show emotions, you know that right? Of course he doesn’t. He’s Martin. The frosted head, shaved eyebrows, emotionless best bud to Jamie, who is the only person who’s come off worse than him so far. Yikes. Maybe they needed a certain amount of men to advance to Minnesota next week, but for whatever reason, Michelle gives Martin the rose. I think she should’ve magnetized it to his nose ring. Spice things up a bit here. I see zero sexual chemistry between these two. He’s building a mansion in the Michelle Friend Zone right now.