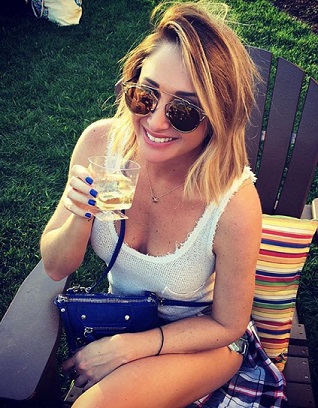 I think one thing that I’ve always cared most about when dealing with people is…just be real. Don’t be phony. I cannot stand fake people. And there are plenty of them in this franchise. There’s people you’ll see this season that are fake. Carrying on a persona that really isn’t them. Hamming it up for cameras. This isn’t news. We see this every season. There’s a certain insincerity you get with a lot of contestants that really ends up coming across when you see them on TV. Today’s Podcast #26 guest Jaclyn Swartz is definitely NOT one of those people. What you see is what you get. She was loud and outspoken on the “Bachelor,” “Bachelor Pad,” and “Bachelor in Paradise,” and she certainly doesn’t hold back today. Put your ear muffs on people, it gets a little spicy today. Jaclyn had a lot of good stories from her times on the show, some of which I’d never heard up until yesterday when we recorded this. Like Ed being so drunk in Vegas he almost missed the “Bachelor Pad 3” finale. Never heard that one. I also talk openly about the first lawsuit ABC came at me with and the role Jaclyn played in it. This is someone who turned me over to producers, and here we are 6 years later shooting the sh**. It’s kinda what I love about her. Also, I reveal something that I did last week which I can’t wait for you all to hear. It’s all in there in today’s podcast. One apology I want to make. Me butchering the Lou Malnati’s pizza name in Chicago. I knew it was a “Lou” and I knew it started with an “M.” But Chicago residents, please don’t hate me. I had a brain fart. Where I came up with “Lou Merlanti’s,” I have no idea. Again, if you want to react on Twitter, be sure to reply and include Jaclyn’s Twitter handle (@JaclynSwartz) so she can see your responses as well. As long as you like real, raw, and unfiltered commentary about the show (with a few f-bombs thrown in), you’ll love listening to this Jaclyn interview. I know I enjoyed doing it.

Yesterday was a first for the franchise, as Chris Harrison took to Facebook Live to introduce America to all of Rachel’s guys. Didn’t reveal much, and it seemed like this is the last time they’d do this, but who knows? He just stood there, new pics came up, and he gave a sentence or two about each one. If you know the spoilers, then some of the things he said might be giveaways to things. But most people don’t, so you don’t really know what he’s alluding to. Here it was in case you missed it:

After the FB Live post was over, ABC posted all the guys bios on their site. They aren’t reinventing the wheel here. Same as every season. Contestants with occupations like “tickle monster” and “whaboom” to get people talking and saying ridiculous things like “His job is tickle monster? What kind of job is that?” For the 1000th time, they’re just doing it to get a rise out of you. We know that’s not a job. I watched the first episode last night. I will have all your episode 1 spoilers laid out for you tomorrow. Jonathan just likes to tickle Rachel a bit, so, that’s the occupation they gave him. I just can’t believe after so many years of doing the same bit, people actually think these are some of the guys’ job titles. Then again, I guess that’s why this franchise isn’t going anywhere and they are ADDING shows, and not taking ones off the air.

Back tomorrow with your episode 1 breakdown of everything you can expect to see on night 1. I figure the first episode spoilers are more important than a Bio Breakdown. So for the first time in a while, there will be no Bio Breakdown this season. Blame ABC for posting these bios so late. Really? 5 days before the premiere? Shame on you. Anyway, I’ll share a lot of opinions tomorrow on the first episode, but I’ll just throw this one out there right now. Josiah is my favorite human ever for one reason and one reason only. He dropped the “Cash me ousside, how ‘bout dat?” line during a talk with the guys. You are my hero, Josiah. Topical humor scores major points with me.

(SPOILER): Who Did Rachel Choose?, Ben & Lauren Break Up, Podcast Update, & the “Bachelor Winter Games” Coming to ABC
(SPOILERS) Everything You’ll See in Monday’s Premiere of the “Bachelorette”
To Top