-WTA is pretty much exactly what you’d expect. It’s a show that is a lot of recapping stuff we’ve already seen, and if we’ve already seen it, we’ve already recapped it, so there’s never too much to add to the show. Not to mention, you already knew what the Krystal stuff was as well. The thing that was odd to me was the fact that the Krystal footage, while they did show it, they showed her saying “________ _________.” Like, it didn’t say “N____e D____k.” Yet for the rest of the show, the viewers at home who were unspoiled kept hearing references to needles and probably had no idea what they were talking about. And even when Krystal called all the girls “c***s,” it just showed it with “_______.” So when Caroline repeated it back to Krystal and went off on her, they bleeped her out too. I’m guessing most people thought she said “sluts.” She didn’t. It was See You Next Tuesday.

-You wanna know what the most asked question I’ve gotten since Sunday night is? “Why wasn’t Maquel at the WTA?” Yes, I understand she wasn’t there, but why are people SO invested in this? It’s not like Maquel was the least bit interesting while she was on the show. Never had a 1-on-1, never really did anything on a group date to stand out, and we know nothing about her time on the show. Maquel was a ghost for five episodes. I have no idea why she wasn’t on the WTA. If I had to guess, it’s probably because she’s been back with her ex since the second she returned home and even spent last weekend at Disneyworld with him. Maybe they didn’t care for her anymore. Bizarre so many people want to know about her when she was such a non factor this season.

-Caroline calling Arie out was pretty great. Granted, I’m not sure why they allowed it in the first place, but it was still great nonetheless. It seems to me that Arie knows the sh** storm is coming and it’s getting to him. Like this tweet from yesterday: 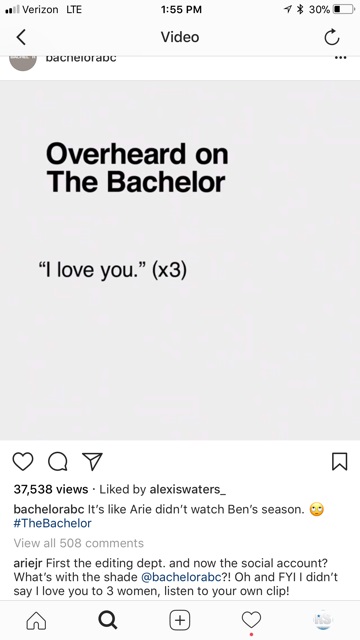 That tweet ended up getting deleted, so good thing I got a screen shot of it. Then there was this one, a direct shot at Caroline:

This is just stuff we rarely see in this franchise while the show is airing. The fact he’s acknowledging so many things, and going after the editing process is quite strange. This show is doing him no favors right now, and he’s clearly bothered by that. Geez. Sensitive Sally is gonna have a meltdown this week if petty stuff like this is already getting to him.

-I thought Krystal’s handling of everything was terrible. Instead of owning her mistakes, once again, she went on the attack. It’s clear that basically none of the women up there cared for her behavior in the house, yet her response to everything was “You were mean to me” was embarrassing. You can tell that Krystal is one of those contestants, and we see them every season, that were one way in front of the cameras, and completely different when they were off. What she was caught saying in the bathroom when she didn’t think she was being filmed shows more to her character than how she acted with Arie, or all the inspirational quotes and positive “energy” she puts out on her social media daily. It comes off as completely phony. The worst part is she seems incredibly lacking self-awareness. Granted, plenty of people in this franchise suffer from that as well, but Krystal being the most recent, and biggest, case of it. Wow. I really do hope she watched this back and actually learned stuff, but going off her performance on the WTA, it certainly didn’t come across like she did.

-Did any of those appearances on the hot seat, outside of Krystal’s, resonate with anyone? Yes, a few of you have asked, “Do think Seinne is going to be the next Bachelorette because of how she acted on the hot seat?” In a word: no. And I explained on page 2 as to why. There really wasn’t anything I saw with any of them that was too earth shattering or a major talking point. They went up there, said what they said, and had moved on for the most part. Look, Tia, Bekah, and Seinne will all be on Paradise I’m sure. Why wouldn’t they be? Remember, the “Bachelor” season that airs in the same calendar year as Paradise is the one that has the most cast members on it. We’ve seen that for the last 3 seasons. At least 13 of of the women who appeared on Chris, Ben, and Nick’s season all ended up on Paradise later that summer. Arie’s women will be no different. I’m guessing everyone you think will be there will be there – and then some.