-Did you notice that all three overnight dates were done and completed in basically the first hour of the show? Shows you how much they wanted to get to their “drama” of Becca’s ex showing up. Everything about it was just so stupid. I know you have a ton of questions regarding the how and the why, and I really don’t have many answers for you regarding. What I do know is no random stranger who’s an ex of a contestant just bought a ticket to Peru, showed up on set, and everyone was shocked. Obviously, this was all planned out by producers and they were waiting for the perfect time to bring him. Were they in contact with him first begging Ross to appear? Did Ross contact them first and ask to be on? I’m not sure which happened, but I’m pretty sure they convinved Ross that coming on wouldn’t have the outcome that they did. Because no sane individual would open himself up to that type of embarrassment if he knew it was coming. But what I do know is nothing on this show happens organically and everything you saw play out was perfectly planned.

-I know a lot of you were asking about Ross post-show and did Becca get back with him, will she get back with him, why’d they break up, is he gonna be on Paradise, etc? Oh and my favorite, “Is Ross gonna be the next Bachelor?” Sometimes I feel people don’t think before they speak. Just listen to what you just asked. Is Ross going to be the next Bachelor? When in the history of this show have they ever cast someone as the lead who’s been on TV for a total of two segments? And not to mention, in those two segments, he made an ass of himself? C’mon people. You’re better than that. Ross is not going to be the “Bachelor,” nor should he be.

-And if you think Becca has any interest in this guy post-show, I think she made it perfectly clear on social media last night with these two tweet and an IG story post. So lets back off the “She needs to get back with Ross!” stories:

I stand by my decision to not accept an unhealthy relationship back in my life. I will never doubt or question that. #selflovemotherssssss

When someone you don’t care for shows up to the party pic.twitter.com/86j6W0QC43 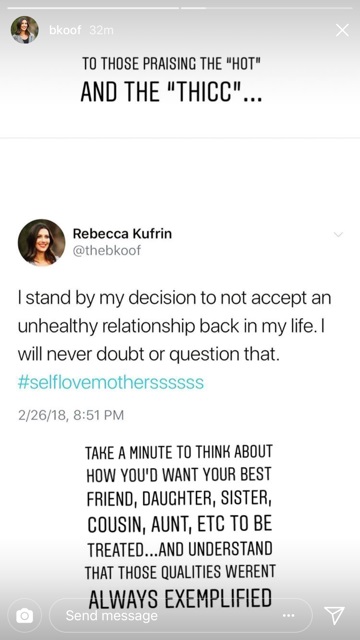 -Just like Ben was an idiot for telling both Lauren and JoJo he was in love with them, so is Arie. You basically are digging yourself a giant hole when you say that to two women knowing you have to make a choice, because inevitably you’re asked after the fact, “Why did you say that to me then not pick me?” Which is a completely valid question. Not to mention, he WASN’T in love with Becca and Lauren at that time. He thought he was. He was in love with the idea of being in love with both of them, but please, we all know how this works. You barely know these people. For years, we never heard the leads (at least on camera) be able to express their “love” for any of the final two contestants, now we’ve seen it done twice in the last 3 seasons. Makes for entertaining television, sure, but isn’t remotely realistic.

-Everything I’ve been telling you since September about this guy, everything you’ve heard about him over the last five years can basically be summed up in this interview that Bekah did with ET Online. She couldn’t have said it any better. He’s not interested in finding a wife, never was, is trying to convince himself he is, but has absolutely no idea what that actually entails, you can’t just change your life dating pattern overnight, and he’ll never marry the girl he is now with. Thank you Bekah for repeating what I’ve been saying for the last 6 months. You are wise beyond your years – even if you just were legally allowed to drink.

So next week, get ready, because it’s going to be an ending unlike any other. At least with Jason and Molly, everything was taped beforehand and they never had to do anything live. Arie, Becca, and Lauren? Not so much. There will be no editing next week during the ATFR’s and we’ll see exactly how they all conduct themselves. For the sake of objectivity, I will try to keep an open mind regarding what Arie has to say, but the guy has been bullsh***ing friends and America for 5 years now. It’s very hard to take what he has to say seriously, especially when I know he’s backed into a corner now. Becca I feel will let him have it for what he did to her and how he went about it, and Lauren, well, lets just all join together for a prayer right now and hope that she sees the light sooner rather than later. She will entering Arie’s world once she moves to Arizona, the only person she knows will be him, and her life will revolve around what Arie wants. That always works out well in the end. Good luck you two. You’re going to seriously need it.